If you have not yet read the first part of this blog then you can do so here.

Day 2 of the Isle of Skye shoot became challenging as the weather set in. Despite setting my alarm for 5 am, a quick look out the B&B window made me turn around and go back to bed. It was raining with very strong gusty wind. There was no point going out until there was some window of opportunity for dry weather. I went and had breakfast, and by the time I had finished the weather had become drier.

It was time to head up towards The Old Man of Storr. As I headed up the eastern coast road, I was confronted with low lying cloud. It was obvious that visibility was going to be zero. As I got within distance of the car park to hike up to The Old Man of Storr, I spotted a waterfall and a convenient parking space on the road. So I parked up and walked up to the waterfall. It was another decision driven by trying to bank my shots given the changing weather conditions.

After spending sometime getting set up at this location I was amazed to find that I was the accompanied by a bus full of tourists, who then climbed up the fell towards me with mobile phones and self sticks. I found this mildly amusing. No sooner as they had arrived the left and retreated to the warmth of their bus.

I was starting to battle the elements. The wind picked up and the rain came in and finally I too had to make a hasty retreat to my car as the rain started to fall more heavily.

The frustration was that over the sea the cloud seemed less thick and there was more light. But on land the rain and visibility was deteriorating. I decided to head up the coastal road and see which other spots I could scout with a view to grabbing an image. I was headed to Kilt Rock and Mealt Waterfall and I stopped off at Rigg Viewpoint which is a fairly dramatic view with a steep cliff dropping into the sea. In better conditions there was definitely photos to be had here. But in the rain there was no chance. I continued on. The next stop was Lealt Falls. This was a short walk along a coastal path from a car park, but now the wind had picked up and conditions were really tough. This again would have been a location with 3 or 4 compositions, a couple of them coastal and a couple of them looking backwards in land to the epic waterfall. As it was with the wet conditions the walk down to the waterfall itself would have been treacherous. But this is a location I definitely want to return to in dry and warmer conditions! When I got to the view point I did try and get the tripod out, (you'll see this in the video) I was determined, but the horizontal rain just kept hitting the lens and this was even before the filters were out of their case. I was fighting a loosing battle. I returned to the car and at this point I was quite dispirited and thought about returning to the refuge of the B&B.

In the end I didn't. I continued up the coastal road to Kilt Rock and there I sat it out in the car at the Mealt Waterfall viewpoint. Because the cloud was light of the sea I was absolutely certain there would be a break in the rain at some point. After about an hour of waiting, the rain didn't stop, but it did hold off just enough to be spitting the odd drop...I ran out and didn't waste any time. No tripod. No filters. I went handheld. I got three shots. The two portrait orientation shots are of the view north onto Mealt Waterfall, and onto Kilt Rock. The landscape orientated shot was facing south opposite the waterfall. 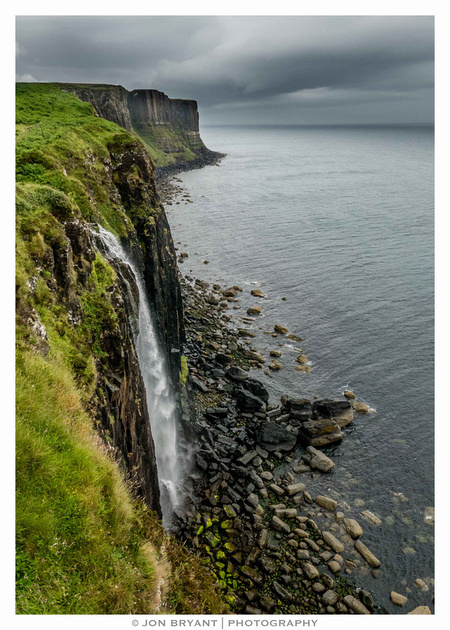 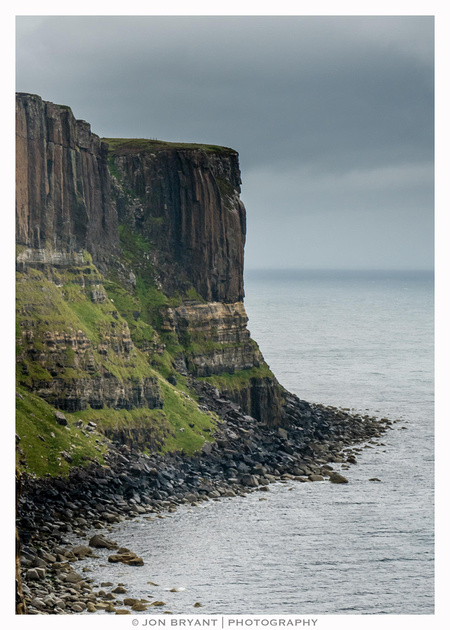 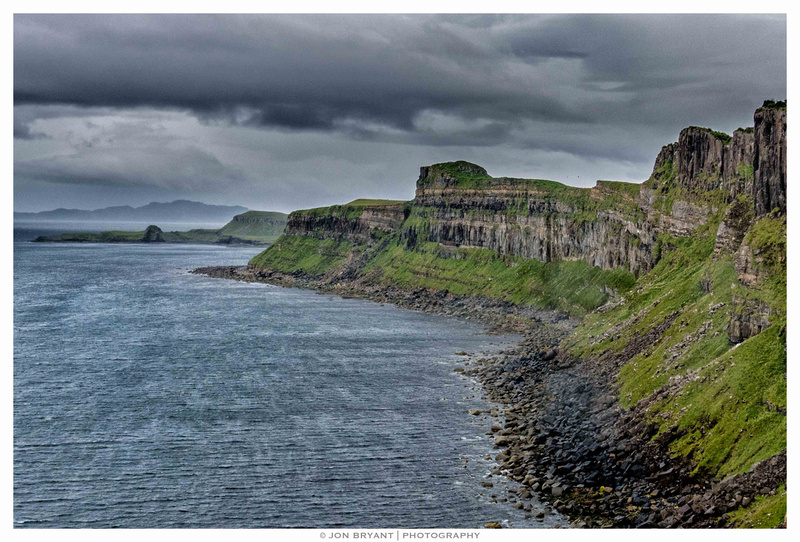 Of course I would have loved to have got my filters out and done this spot justice, but I had to bank my shots first and foremost due to the weather. You can see with the photo above just how choppy the sea was. You can see the dark and dramatic skies. What this image doesn't tell you is the strength of the wind (again you'll get a sense of that in the video!).

Ever the optimist I continued up the coastal road. I decided that even if I couldn't get good quality images I would do some location scouting for the day I'd return. This is important as a landscape photographer. If you have a sense and a knowledge of a location when you return you can really speed the photographic process up, by knowing exactly where to go and at what time. I headed first to Staffin and the Brogan which has a stunning view onto the bay and coast. Again I jumped out the car for another handheld shot. 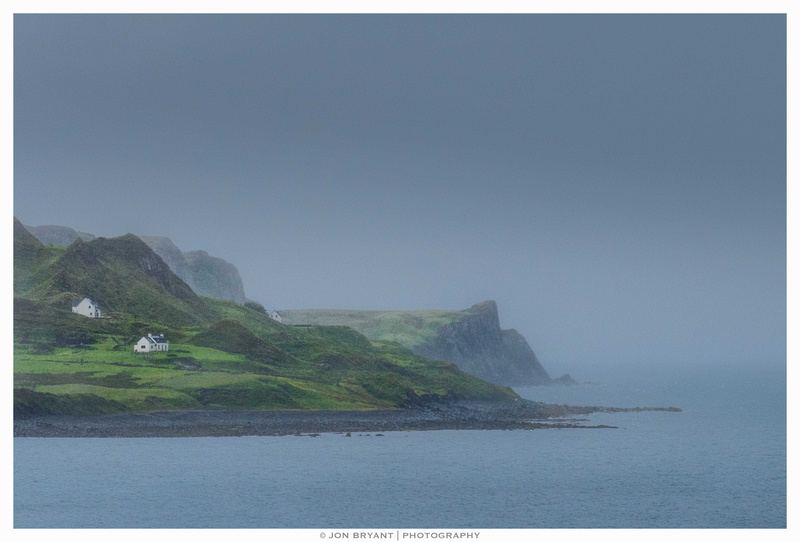 The image from Brogaig I think sums up the entire day. Grey, misty non stop rain and constant wind. This is as far as I was going to go for the day. Despite my waterproofs I was soaked and decided to retreat to the B&B for the afternoon. By early evening the weather broke just slightly and I headed down to a private beach in Portree to get one last image of the day. 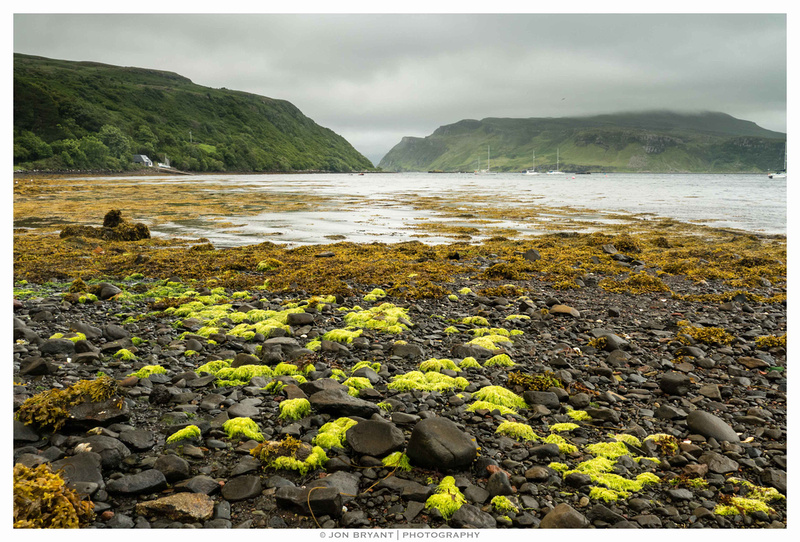 Having learnt my lesson, I got an early night and set my alarm for 5am. I looked at the weather forecast and saw that the rain was mostly likely to hit from 10am onwards. I wanted to get to Talisker Bay, ideally at low tide which would have been in the evening, but I had to hedge my bets and get there when it was dry.

So the next morning I headed straight to Talisker Bay.

On the drive towards Sligachan I noticed the Cullins in front of me covered in dark cloud. I could see the potential of the road acting as a lead in line, so I parked up and trekked off road to get a vantage point. This afforded me an opportunistic couple of shots which got the day off to a good start. 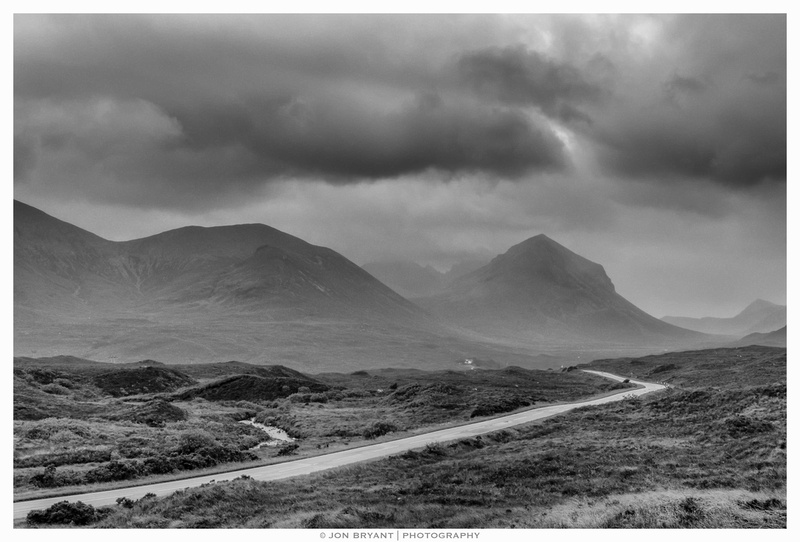 The road to Sligachan. 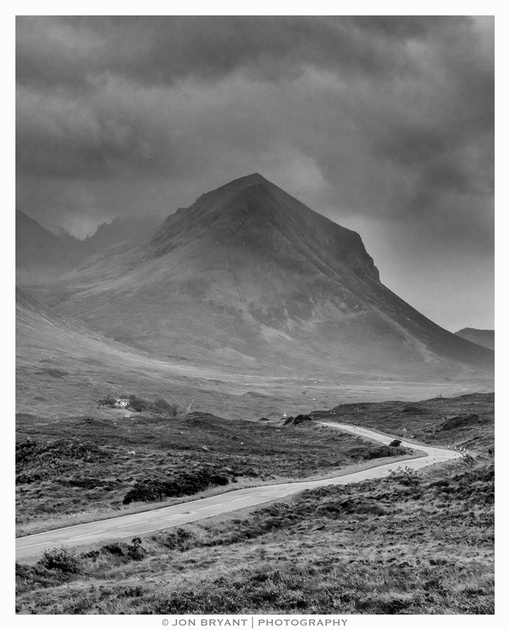 The road to Sligachan.

After this unexpected success, I continued towards Talisker Bay. I am going to write a completely separate blog about Talisker Bay and the morning I spent there because I learnt a huge amount about being a photographer during a couple of hours at this location. Suffice to say, there was a long walk involved, it was remote and isolated, it was hide tide, the beach was full of slippy boulders and despite my best efforts I came away with images I was frustrated with. I just couldn't get into the position I wanted and had to compromise and I hate compromising my creative vision. 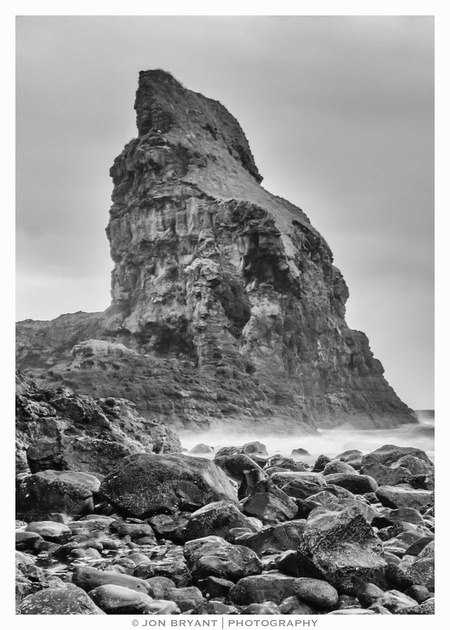 This image wasn't what I was going for. I wanted to get closer to the water's edge and include more of the sea with a slower shutter speed. However inappropriate footwear (wellies) saw me doing a rather precarious rock dance which had the potential to be an ankle breaker at the very best. This is as far as I could get confidently. The bleak contrast meant I decided to go for a black and white conversion.

With rain drops starting to fall again, I made the long walk back to my car and headed back towards Sligachan. On the first afternoon I'd got some easy shots from the bridge area, but I wanted to explore further and try and get a shot of the Glamaig mountain with river as a leading line towards it. I started my trek riverside in the dry. As I crossed the bridge I could see the fork in the river where I wanted to be but I couldn't get there. The whole area was just a bog. And this time to assure my footing I had my walking boots on, but they aren't water proof. I needed my wellies. Again another poor selection in footwear! So I decided to retreat back the other side of the foot bridge in order to get to a point where I saw another photographer. However I got distracted. First the sun came out. So I did a panoramic.

Second, I found a stunning small waterfall and pools. 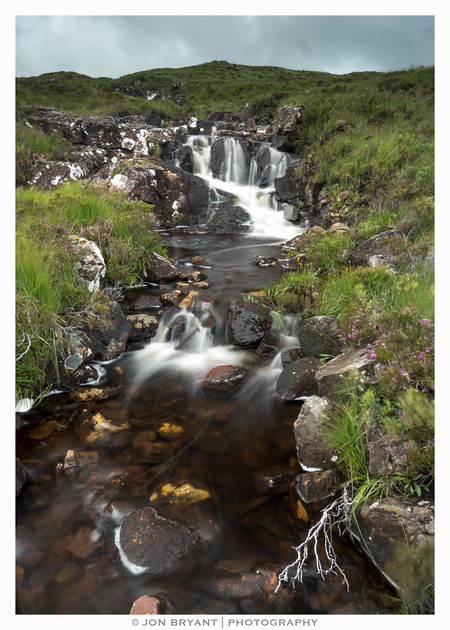 Small brook next to Sligachan

It was dry enough to get my polariser and little stopper on, and finally I felt I had some control on my photography. I was able to bring the detail out in the water and show the contrasts in the purple heathers and green grasses. I was very happy with this image.

I then trekked back over toward the fork in the river via the foot bridge and the weather turned. The wind got up and the rain started coming in. This was only about 30 minutes after taking my sunny panoramic of the Cullins. By the time I'd trekked back to the vantage point on the river fork, I was once again fighting a gale. I persevered and finally got my last shot of the shoot. 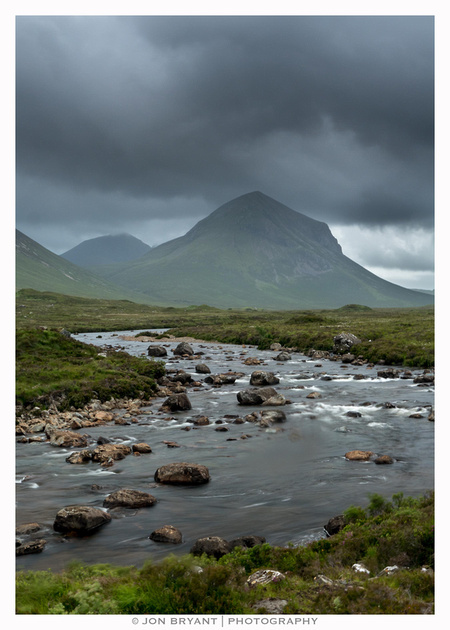 Just after I took this shot the rain came in and it was torrential rain. I headed back to the car and subsequently to the B&B. It rained all afternoon. The weather broke again slightly and I rushed out again trying to get up to The Old Man of Storr again, but by the time I hit the road it started raining again.

I had a good set of images and at least the 10 images that met the brief for Panasonic. The FZ1000 had performed admirably. I'd put it through a punishing 3 day shoot in the worst conditions imaginable. I'd got it soaking wet. It never let me down. For a 1 inch sensor camera in tough lighting conditions the images coming from it were remarkable. As I stood next to Sligachan river I reflected on the mission, and I had a new found respect for fellow landscape photographers. 70% of my work is wildlife and 30% is landscapes. This is slowly changing and moving more towards 60/40 this year. I've been out in remote areas before in search of landscape images. But I'd never experienced somewhere where the elements and weather changed so quickly and so frequently. Despite all my planning, I'd learnt a huge amount not just photographically but about myself as a photographer....how to deal with the frustrations, how to work quickly in tough conditions, how to bank shots first before getting creative, how to endure what's thrown at you, be flexible and resilient.

The whole experience is documented in a You Tube video below. Please accept my apologies for the varied sound quality due to the wind in the video. It is subtitled at certain points so please stick with it and I do hope you enjoy it. I'm working on an improved audio workflow for future videos.