Panasonic asked me to go on a mission with the FZ1000 bridge camera. The mission was to get 10 landscape/wildlife images from a dramatic and rugged location. 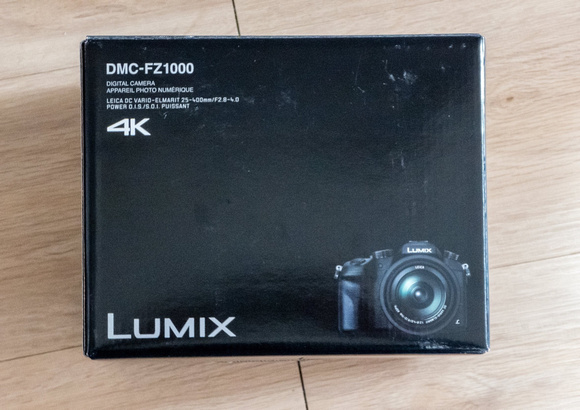 I started to plan my trip and I decided that I would visit the Isle of Skye in Scotland. This is an iconic location for landscape photographers, but I had never been there and I was very keen to discover some of the locations I'd read about such as The Fairy Pools, The Cullins Montains, Kilt Rock waterfall and so on. The other advantage of the Isle of Skye is that with a carefully planned boat tour I would be able to view and photograph species such as Puffins and Seals, which would help meet the brief. 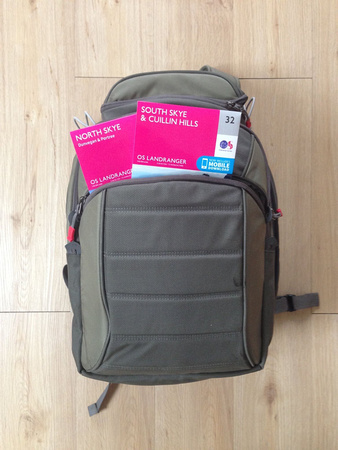 Due to other commitments I could only dedicate 3 full days to the shoot which meant things were very tight and I would be relying on the weather to be my friend....which in the end, it wasn't. So planning would be critical.

You can watch that planning and preparation in the first of what I hope will be a three part vlog about this shoot, here:

Due to a low pressure weather front hitting Skye around the time of my arrival on the island my planning was pretty much thrown out of the window.  From the airport I had do my best to get on the Isle as quickly as possible to take advantage of what dry weather I had. The light was ok, but there was still a lot of cloud in the sky, so most of the light was being diffused. I decided to plan on heading to The Fairy Pools soon after checking into the B&B and focus on this location for the full afternoon/early evening. This turned out to be the right thing to do. My only regret was not heading The Old Man of Storr once I'd finished at The Fairy Pools. The Old Man of Storr was visible as I drove towards Portree, but after a long days travelling and shooting I opted to get to the B&B and some dinner and rest. That in hindsight was a mistake. If I had just continued up the road from Portree for 15 more minutes I would have had a visible shot of The Old Man of Storr. The rest of my time in Skye, it was covered in cloud and could not be seen.

On the way to The Fairy Pools I stopped at Sligachan which was on route. This is a spot very close to a hotel and so has a lot of visitors there. It was a fairly easy photo to get in so much as I parked up, walked over to the river and started to set my tripod up for the composition. However it was a waiting game in terms of the number of tourists that would amble in to shot. Once Sligachan was in the bag, I was headed back to the car to get to The Fairy Pools. 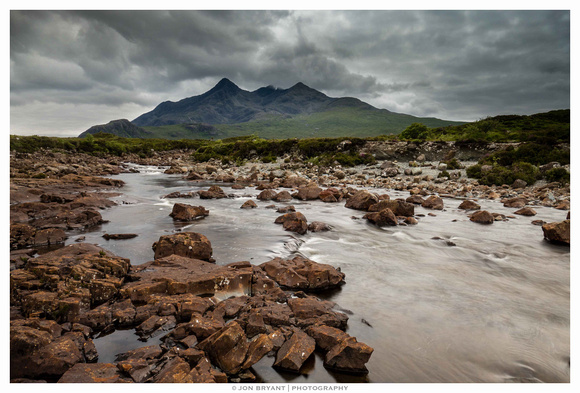 Depth and space: The river is surprisingly wide and you don't get a sense of that until you set your feet and tripod in it. You are spoilt for choice in terms of composition.

One of the things on Skye is that it is stunningly beautiful and the temptation is stop every 5 minutes to get a photo. This is always the dilemma with landscape photography, when to stick to the plan and when to deviate from the plan. As I was driving towards Carbost, I spotted some old boats on the beach of a loch. There was a small track to get down towards that beach so I headed down there. This was an unexpected highlight. I was confronted with a stunning back drop and this old derelict boat as foreground interest. I couldn't have wished for a better scene. I set the camera up and got to work. The weather was very static. There was a lot of wind but a total blanket cover of cloud as far as the eye could see. There was no point hanging around hoping for a better sky. I could have waited all day and it would have still been overcast and cloudy. 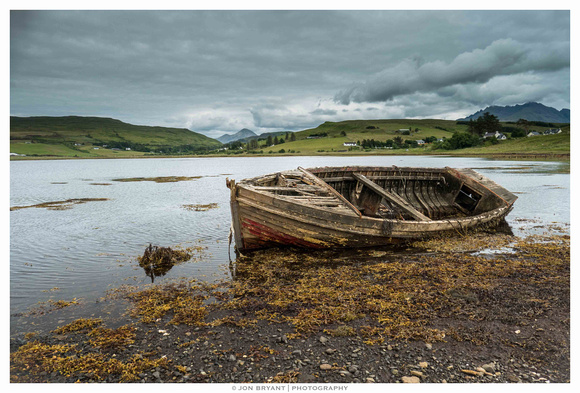 Anchor elements: the textures in the boat create interest and the location in the frame is a good foreground anchor to the image. I used the waterline with seaweed as a leading line in to the frame from bottom left to the boat.

I hit the road again and headed down the single track towards the Glen Brittle forest and the car park for access to The Fairy Pools. It is an interesting drive on a single track road with the odd passing place. I can imagine in great weather this would be a tricky drive with lots of visitors. It was surprisingly quiet and I didn't meet much traffic, and I was hopeful then there wouldn't be too many people. 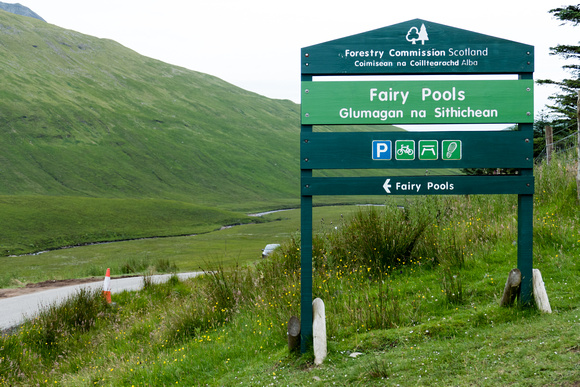 On arrival towards the car park there were lots of cars parked up on the road which was an indicator of the amount of visitors present. On parking up and getting my gear ready the walk was clearly indicated and deceivingly long...​ 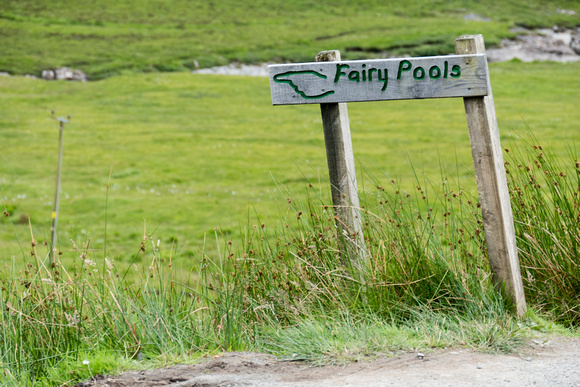 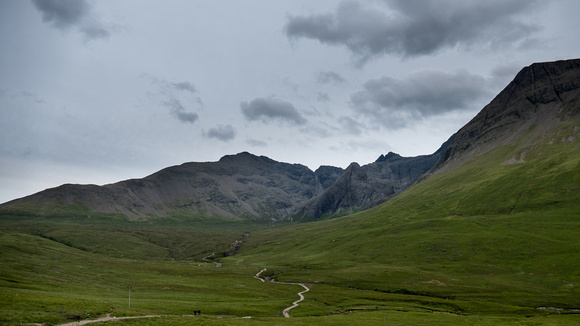 The path way can be easily seen from the car park, but you don't really get a sense of the pools, the waterfalls or the scale. The view makes things look like they are in miniature, but as you start out on the trail you start to see that the river and waterways cut through a series of pools which are very well hidden until you actually are on top of them.

The complete walk is long. I have no idea how long in distance, I would estimate at least 3kms if not more. But there is plenty to view on route and again as a photographer this is one of the big challenges. Which compositions do you focus on? And as a first time visitor, every time I continued walking I came across another pool and another composition. That's a good and bad thing. Good because there are so many options. Bad because it can really slow you down, especially in the high season when you have lots of visitors and they tend to roam free in and out of your frame.

I started out from the car park at around 3pm and I returned to car at 7.45pm. I spent a big chunk of my day here simply because I wanted to really bank my shots at this location and given the dry weather I had. Knowing the forecast for the next two days of my trip was 90% chance of rain, I was determined to capitalise on the dry weather.

Because of the overcast skies the key filter for me to use with the camera was the soft ND grad. This was to makes sure I could control the highlights. Whilst the majority of the cloud was overcast, gusts of wind on the backdrop of the mountain would create small cloud gaps where light would leak in, and thus create highlights. Using the soft ND grad helped me hold back these highlights and expose correctly for the foreground. The other filter that was essential, given I was working during the day was the circular polariser. This was to cut the reflections from the water and create a much deeper colour in the waters. The other benefit of the polariser is bringing out saturation in skies, especially when you have an overcast day with patches of blue. The polariser will help make that blue pop, and hold back the clouds contrast. The final filter I was using was the little stopper. This was to be able to slow my shutter speeds and blur the waterfalls and create a sense of movement. The little stopper is used a lot for this type of image and can come across as a little cliché with waterfalls, but I like that soft movement look in these type of images. I think they work well. 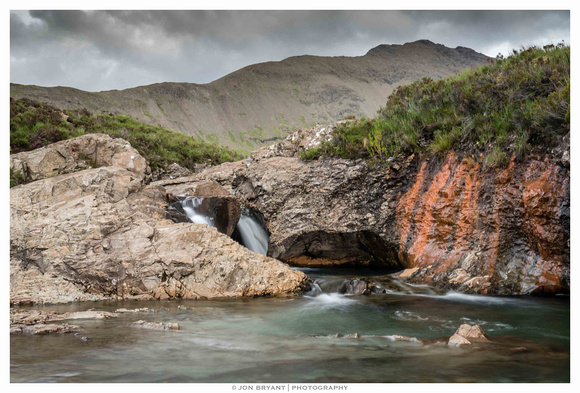 Layers and colours: what stood out to me with this composition was the overlapping rock layers. Whilst it was difficult to get a clear shot of the waterfalls, and position them in a central position of the composition, the copper coloured rock face on the right was an essential inclusion in this composition. 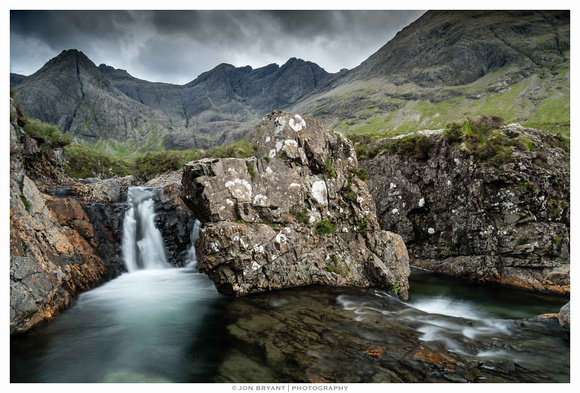 Depth: the challenge was often which elements to leave in and out of the scene. This large rock I used as a central focus point, I liked the fact that you see the clarity of the water in the foreground and the light and shadows around the disruptive water pools.

After a long session of at The Fairy Pools and with light starting to slowly but surely fade I decided to retreat back towards Portree. As I mentioned, my regret was not heading to The Old Man of Storr straight after The Fairy Pools. But sometimes you have to live to fight another day! After a long day travel and a long day in the field my brain was telling me to get some much needed refreshments and rest ready for the next day. There's nothing worse than trying to shoot when you are tired mentally and physically, it just means errors creep into your work.

Once I returned to the B&B I received a text message from the boat tour skipper. He had to cancel all sailings for the next 3 days due to the weather. So there would be no Puffins or Seals...and this text message confirmed that the next couple of days would be a huge challenge.

In Part 2 of the blog, there will be a second video which documents all the photography in the field and I will describe the challenges I faced shooting when the weather was against me.