Living in the Benelux region, it's no secret we have a fairly robust population of foxes. They are one of my favourite animals. Yet, they are incredibly elusive. My relationship photographing foxes has been a roller coaster. I had some success in the Ardennes region of Belgium. However my adventure in the Ardennes was my very first experience in tracking foxes. And whilst I was fortunate to sight and photograph them, I realised I had a lot to learn in terms of tracking and approaching them.

After that initial experience in the field, I turned my attention to my own locality: an urban environment. Sure enough, I found a fox den in the town where I lived, and plenty of signs of activity, but no sighting. This despite a friend of mine sending me a phone image of a fox cub sitting in the car park where the den was located! I put a call out to the local community and got some leads. I visited some residential back gardens. But no luck. Despite the residents confirming regular visits, when I showed up, the foxes stayed away. I persevered. I staked out an area in the streets behind my home on a couple of evenings. And I got lucky with a sighting of a mother and a couple of cubs, but they flew past me and went into the hedgerows between houses and there were no images to be had.

Frustrated, I decided to do some more research. I discovered that there were some photography workshops available to photography red foxes in sand dunes in The Netherlands. The location of these workshops was not disclosed. Despite not speaking Dutch, I used google with some Dutch key words such as Vossen (fox) and Duinen (dunes) and the search results returned a number of blogs from Dutch photographers with a lot of information the said population of foxes. In fact in the Dutch photographic community these dune foxes are no secret. And I know some purists who say that these foxes are so habituated to the presence of people that it isn't really wildlife photography. I disagree. Whilst I don't condone over habituation of wildlife, I believe we need to understand that the limits between human population and wildlife habitats will always infringe on one another, and we should respect and preserve those limits. So where are these dune foxes? 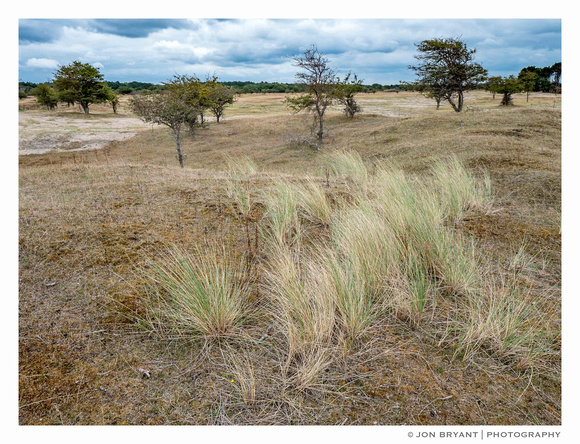 One of the images from my first visit in August 2018

The population of dune foxes is in a nature reserve owned by the Dutch Water Company in a location called Amsterdamse Waterleidingduinen. The dunes filter the rainwater in a natural way which is the first step in creating fresh drinking water for the city of Amsterdam. It is located between the seaside town of Zandvoort (where there was once a F1 Grand Prix in the 1970s and 80s) and Schipol Airport. If you look for this reserve on Google Maps do not be fooled. This is one big reserve! It is about 40 square kilometres in size. It is also home for the largest population of deer in The Netherlands, with an estimated 2000 deer in the reserve. So given those statistics, how do you find the foxes?

My first attempt to find, and photograph the foxes was in August last year (2018). I had done my research and I knew roughly the foxes are located in the central area of the reserve. So on my arrival I parked in the east car park and walked to the information centre. There I bought a map (highly recommended) and asked where the foxes were. I was shown where on the map and told not to feed them! This was a good indication that they were present and habituated and there was a good chance I would see them. So I set off....and promptly got lost. This is not like me. I am very good at orientation and map reading. However, on one occasion I didn't take the right path and this sent me far south. I had to ask some other walkers where I was. When I realised I had deviated from the route I tried to make my way back to the centre of the reserve. However I'd walked about 8kms at this point, was very tired and still had about a 4km walk back to the car park. So I abandoned my mission. I had some landscape images and a few good deer shots, but no foxes.

In February I decided to try again. This time I did a little more planning. I drove up the night before and stayed locally in Zandvoort. The plan was to rise early and park in the north car park. Looking at the map, the north car park had a much simpler access route to the central area of the reserve where the foxes are located. That afternoon I took a walk on the beach at Zandvoort. It was a grey overcast afternoon and the beach was featureless. I took my tripod, kit lens and filters and I decided to push myself to create an image. I was pretty happy with the result. 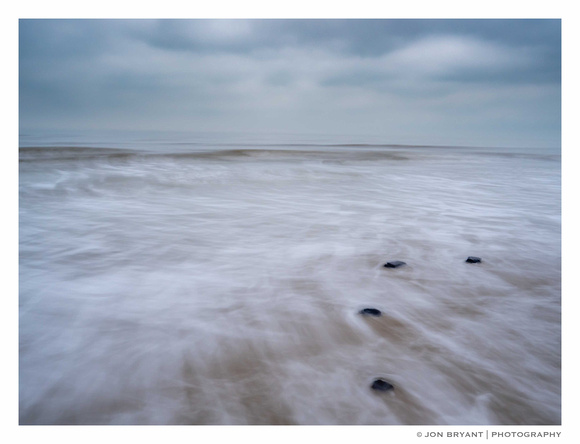 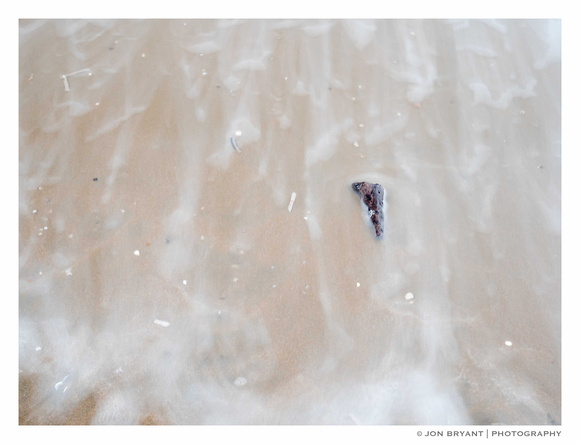 The following morning, the weather had cleared. The forecast was great and looking out from my room I could see clear skies at dawn. When you arrive at the reserve you must pay a €1.50 entrance fee which is via an automated machine and you can pay by card. The entrance to the reserve is through an automatic gate. I wasn't sure what time the reserve was open, but in fact I arrived at 8am and the automated gate was open. So I assume if you wanted to visit earlier, which for foxes may be a good plan, it should be possible. It took me about 40-50 minutes to walk from the car park to the area where the foxes are located. On the route I did discover the odd distraction, and it isn't always easy to let a photographic opportunity pass you by in favour of focusing on a goal (the foxes) that may not come to fruition. Knowing this, I decided that if I saw something interesting I would pursue the image and delay my fox mission. And with the morning light, the sun low in the sky, there was a golden sky. I was rewarded with a couple of incredible compositions. 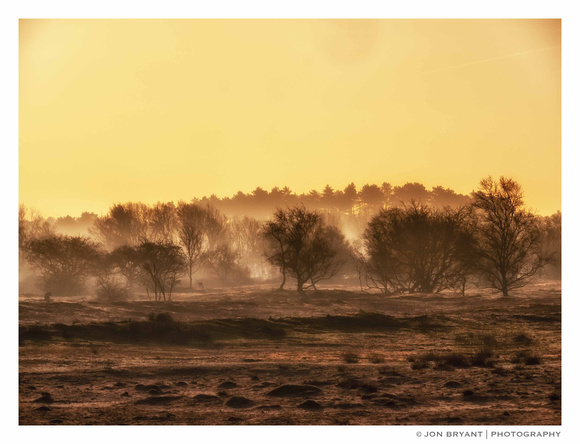 Golden hour over the nature reserve 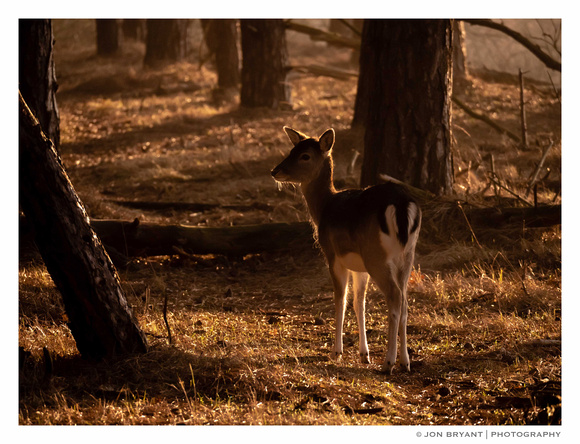 A young fallow deer in the woodland with golden side lighting 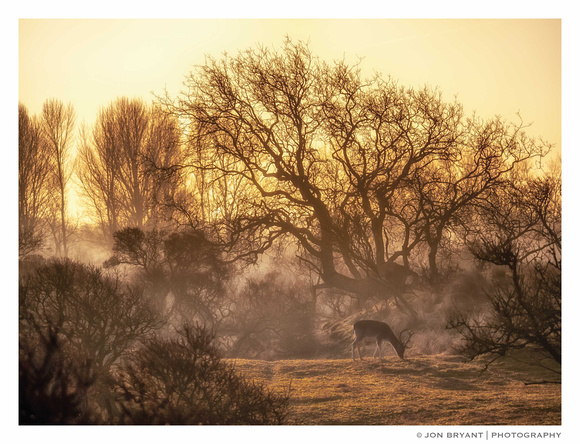 The reserve is also well known for birds. There are a wide variety of bird species in the reserve. However as the reserve is very large in surface area, you need a little bit of luck. Birds are everywhere, but the distances between them and your lens can be great. Because I shoot with the Lumix G9 and 100-400mm f4.0-6.3 lens, I am fortunate that I have a good chance at distance of getting a shot. Even so, you need to have your wits about you. Using your eyes and ears as you walk, you can observe where the birds are, and with a little field craft, you can make an approach to get you closer. On my first trip to the reserve, I was rewarded in this way with some great images of nuthatches, one of my favourite birds. They aren't all that common, but in certain areas can be abundant. I spotted a couple and then found an area where there were multiple nuthatches on some trees. I've also seen great spotted woodpeckers, these proved a little more elusive. There is plenty of waterfowl because there are so many waterways and lakes within the reserve. The usual suspects of swans, geese, canadian geese are always present. There are plenty of cormorants that are usually airborne! Lots of crows too. I've also seen a couple of kestrels hovering. And of course you see the odd grey heron. If you are really into your birding, I would recommend visiting, but advise that binoculars are a must, and if you want to photograph the birds, be patient and make sure you have a long lens. As I was walking I spotted at distance a bird I didn't recognise on some reeds. In fact there were a total of 3 birds on the reeds. I decided to try and make an approach and slowly but surely got within proximity. I'd spotted some female (pictured) and male reed buntings. I was able to spend quite some time with these birds and watching them feeding. Despite a strong wind blowing the reeds, I got some great images. 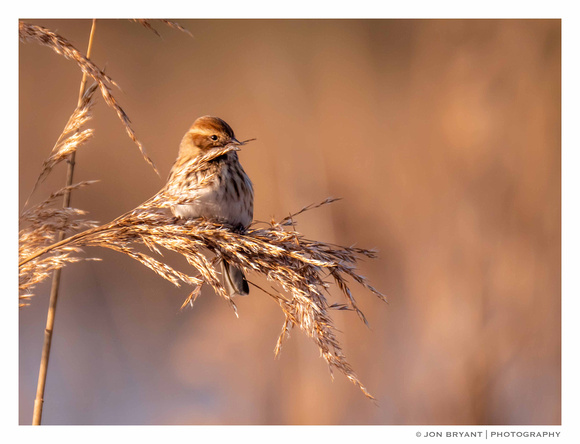 A female reed bunting balancing on reeds in windy conditions

I continued my walk to the site where the foxes were expected. The walk itself shows just what an incredible natural space this reserve is. And despite public access, it remains relatively calm and peaceful. I eventually came to the intersection on the map which I was looking for and was presented with the following scene indicating I was in the right spot. 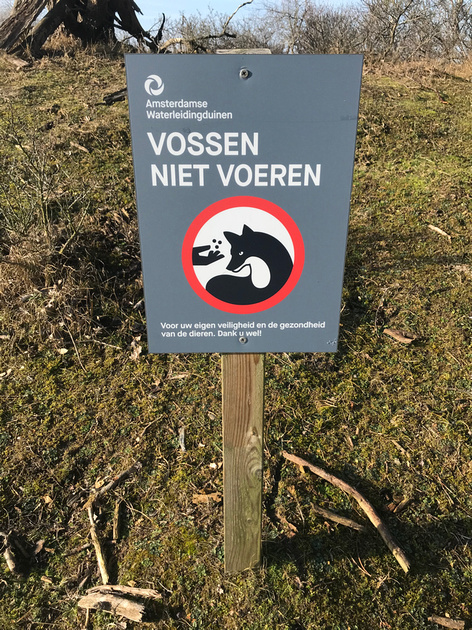 The sign said it all. I arrived, and there was a small shelter that you could sit at. There were just two other walkers there, one with a camera. The photographer was clearly there for the same reason as I. He wasn't hanging around though and took one of the tow paths alongside one of the waterways. I decided to follow him, assuming he might be a local and have better knowledge than I of the location. I explored the dunes and embankments in the surrounding area and returned back to the feeding sign post. I then did the same exercise in 4 different directions. Each time walking about 20 minutes or so to see if I could see any signs of fox activity, digging or even a den site. I found nothing. On returning to the intersection, I sat at the shelter and now found that I was joined in the area by another 5 photographers. All were in for disappointment as was I. No foxes today. I sat in the shelter for about an hour, in the hope that maybe a fox might show itself. But it wasn't to be. 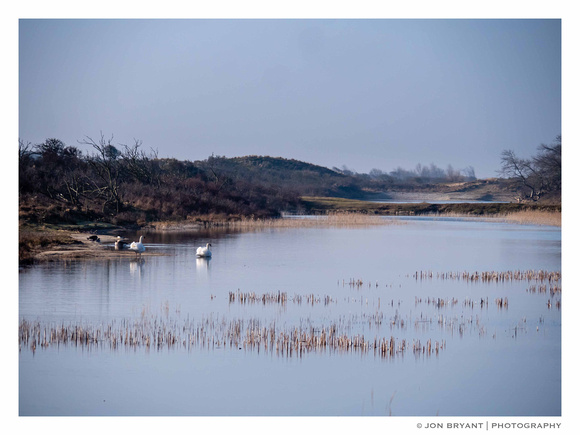 One of the canals close to the area where the foxes supposedly reside. 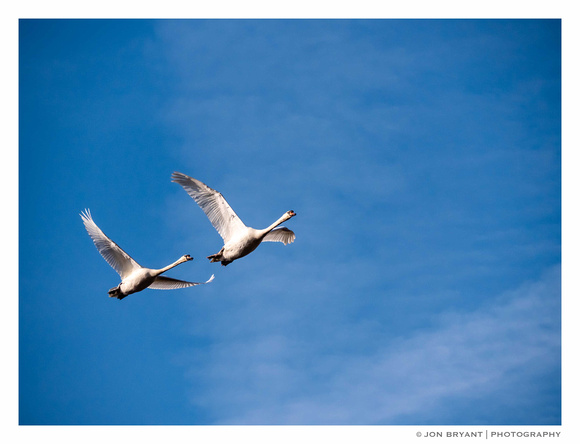 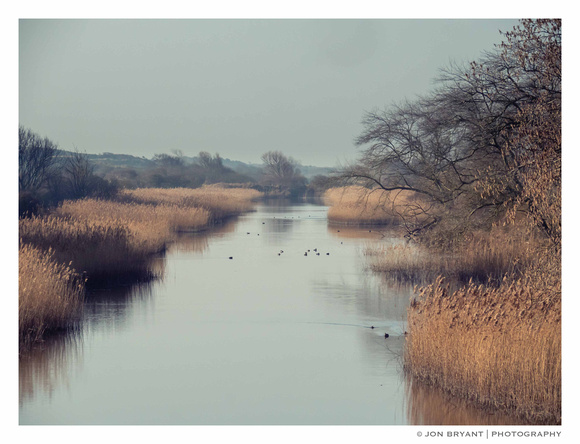 One of the many canals in the reserve

Despite my disappointment, the reserve is a very special place. It has a very unique flora. There are parts of the reserve that remind me of Les Landes in the South West of France with sandy soil and tall pine trees. Other areas remind me of Africa, small watering holes surrounded by thorny bushes and short shrub trees. Then there are the areas of pure sand dunes with long grasses. It's a stunningly beautiful domain and it is incredible to think this is just west of Amsterdam and close to Schipol Airport. It is such a large domain I will be returning again and again. The foxes are my main draw, but I do want to take sometime and explore the southern part of the reserve and in order to do so, I probably need to use a bike which will be a much more efficient way to get around such a large domain. For the foxes it was a no show, but the beauty of the domain makes it well worth the visit.