In my last blog post I shared my failed attempts at trying to find the dune foxes at the Amsterdamse Waterleidingdunen Nature Reserve in The Netherlands. I knew that it was a place I was going to return to. And I am pleased to announce that on my third trip to the reserve I had success!

On this third trip, I was simply lucky. I still haven't worked out when the best time to visit is, based on the potential to discover more active behaviour of the foxes. On this occasion however, and being a beautiful sunny day, there were a number of photographers that had gathered at the shelter where the foxes are normally seen. I typically suspect that foxes are more active in the early hours of the morning, but in these dunes I suspect that they are much more active late afternoon or in the evening.

Whilst I really enjoy visiting this nature reserve, I have to say the walk from the car park to the area where you are likely to find the foxes is a long one! And it feels even longer when you have a camera bag of kit on your bag. On this visit though, I decided to go with the Lumix 50-200mm f2.8-4.0 lens instead of the 100-400mm f4.0-6.3 lens. I decided to make it my mission to focus on the foxes and not bird shots. And by doing this, lighten the load on my back. That is one of the advantages of the micro-four thirds system cameras, the body and lens being smaller and more compact make the total weight compare to a traditional DSLR much lighter. However, wildlife photographers rarely go out with just one lens! On this occasion however, I took that risk and it paid off!

On arrival at the shelter I had a chat with some of the other photographers to see if there had been any sightings of the foxes. Unfortunately no sightings. However I spoke with one lady who showed me what she had been photographing that morning. To my amazement she had found some very small tree frogs and with a macro lens had got some amazing images. I made not of the location and added that to the list for a return visit, and a mental note to pack my macro lens!

I then waited a while. The weather was warm and sunny and so I found a nice spot to sit down and just take in the surroundings. One of the issues with the reserve is that it isn't easy to spot wildlife. It is easy to spot the deer. But the foxes are much more challenging. Even though the landscape is dunes, there is a lot of vegetation which can obscure the view. So you just have to play a waiting game and keep your eyes peeled.

Then sure enough after about 1h, one of the photographers spotted something. And as if to prove my point, we found this... 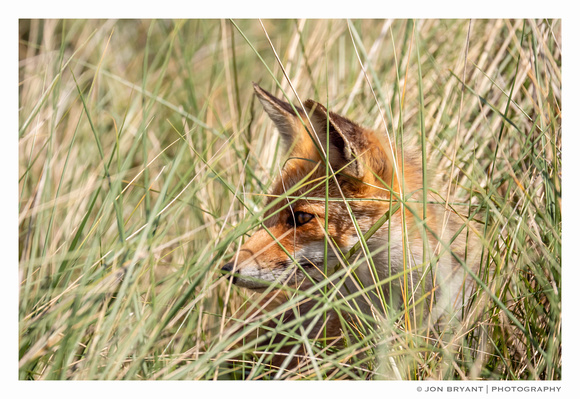 This fox was just meters from the bath, lying down in long grasses and in the sun. Nobody could see it. Until it raised its ears, obviously alerted to something. But this fox was not alone...

As this first fox was sadly crowded by a group of foxes and in the end decided to get up and make an exit, I became curious that there was potentially a second fox nearby sleeping. With a little field craft, I backed away from the main group of photographers and decided to explore another area. 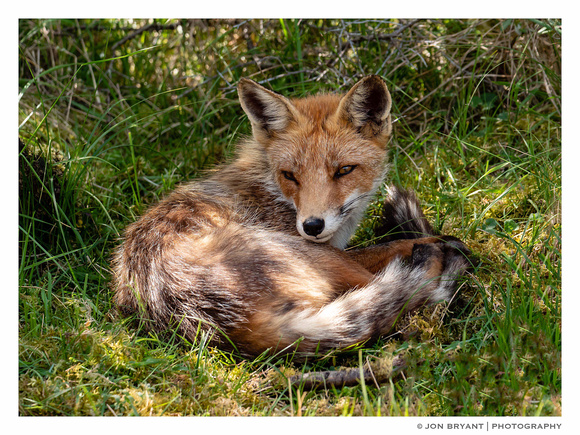 Sure enough, under a small thorny bush, there was another fox curled up, not asleep, but sleepy. I very slowly approached making sure not to startle it. Sure enough he looked at me, and quite honestly was completely unperturbed by my presence. So I kept a good distance for my 50-200mm f2.8-4.0 lens and started to take some shots. I then just waited a bit to see if he would do anything. Specifically the tell tail signs of potential movement, is that the fox/animal will start to yawn. Yawning gets additional oxygen to the brain which is a signal they will get up and move. This fox didn't yawn. So it wasn't going anywhere.

The first fox seemed to have moved on. And it was unfortunate that there were now about a dozen photographers who became aware that I was photographing something. Sure enough in no time at all I was surrounded. Quite honestly it was a circus. But I am happy to say, the fox was not stressed. I think the group of photographers got plenty of good shots. And then after some time, this fox finally stirred, got up casually and wandered off through the bushes opposite me. I slowly followed it. Clearly it had had enough of the attention. It crossed the low point in the canal to the other side of the embankment where I could not follow. And that was the end of the sighting.

The G9 and 50-200mm lens combo was superb. The focal length is equivalent in 35mm terms to the classic 100-400mm lens. This is such a versatile focal length for wildlife photography. Furthermore the size and weight of the lens balance beautifully with the G9 body. The lens has image stabilisation, and with the G9's in body stabilisation, you can use this combo handheld without any issues. I was fortunate I was out on a bright sunny day. But if I had found these foxes in fading light I wouldn't have had any issue lowering the shutter speeds whilst the foxes were static, down to 1/20 to get well exposed shots.

As I had done my research I knew these foxes were typically habituated to human's presence. Therefore I knew, if I were to spot one, and kept a respectful distance without stressing the animal, I would be able to get relatively close. So the 50-200mm f2.8-4.0 lens was perfect for these conditions. The 100-400mm f4.0-6.3 would have been too long a focal length, and the 12-60mm 2.8-4.0 would have left me a little short at the long end of 60mm. It pays to do your research ahead of time, and anticipate the type of focal range you need for your subject.

I got a total of two compositions...

But that is the nature of European Wildlife Photography. You have to put the effort in and the returns can be minimal. I was though very happy that I got to spend time with these foxes. They are stunning animals. And I was happy to have been able to photograph them for some time in a very relaxed environment.