The story behind the frame 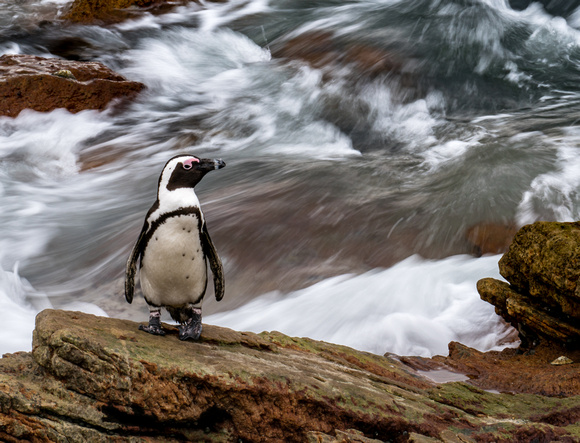 As camera technology progresses and we see more cameras launched in the mirrorless segment, I read more and more online about camera specifications. Yet it is very rare I actually see anyone explain how these specifications actually translate into actual camera craft. Even worse, when the cameras are launched and handed to the usual community of influencers, we get a whole bunch of videos reviewing the camera with titles such as "hands on with the ...." with almost no examples of images taken as a result of a key benefit of this new camera technology.

I will step off my soap box...

What has this got to do with an African Jackass Penguin?

This image for me was a watershed moment in my photography. It was taken 3 years ago when I was visiting Cape Town to give a presentation at a Wildlife Photography event. I was fortunate enough to take a trip to Betty's Bay. Betty's Bay is a fabulous place, a stunning stretch of coastline, with a rocky beach home to a large colony of African Jackass Penguins.

It was a gray overcast day, there wasn't much light. Up until this moment, the majority of my wildlife photography was shot using Aperture Priority mode and making sure my ISO was high enough to accommodate a fast enough shutter speed to render the image sharp.

However on this day, with limited ambient light, I was having to push my ISO higher and higher to get a fast enough shutter speed. I was watching these penguins navigate the waves, the tides and the sea splash over the rocks. I was shooting with the Panasonic Lumix GH5 and the 100-400mm f4.0-6.3 lens. Unlike the G9 which was launched just months after I took this photo, the GH5 does not have in camera body stabilisation. However, the lens does have optical image stabilisation (OIS). And the combination of the GH5 and the 100-400mm f4.0-6.3 lens is lightweight, it is easy to shoot handheld. As I observed the penguins I decided to do the exact opposite of what I normally do. I dropped the ISO to 100, and then increased the aperture to f22. The resulting shutter speed was 1/15 of a second. I focused in on one lone penguin who remained static just long enough for me to take the resulting image with the motion blur of the sea in the background.

The resulting image was exactly what I had envisaged; an animal in its environment shot with a twist, the dynamic movement of the sea in the background.

Very simply I would not have been able to take this image with a full frame DSLR camera and equivalent lens handheld. I would have needed a tripod, and a lot of luck. This image is an example for me of how knowing the features and benefits of your camera can help in taking more creative imagery.

When the G9 was launched I was able to take similar images, but even easier as the G9 has in body camera stabilisation, and combined with the optical image stabilisation of the Lumix lenses, I know that for subjects that are static, I can reduce the shutter speed and have a good chance of a sharp shot. This not only allows me to shoot images of animals in dynamic moving environments, it allows me to shoot in lower light conditions without having to push the ISO up (and hence introducing more noise to the final image).

Next time you see the specifications of a new camera at launch, as yourself one simple question "what will that mean for my photography?". It's a fundamental question that may help you avoid G.A.S (gear acquisition syndrome!) and allow you to focus on investing in a camera that will help you advance your camera craft.