In the last 6 months or so I've become a strong advocate of getting out locally in search of wildlife. I've found that my local lake has provided a great platform to birding photography. I've noticed that there is an incredible diversity across the seasons. In winter I was shooting heron's, Canadian and Egyptian geese. Then at the end of winter I was starting to see the odd fast moving kingfisher, robins jumping out on the path in front of me, and the blue and great tits in amongst the trees. Now as spring has well and truly sprung, I decided to head out again over several days to see what species were present armed with the GH4 and 100-400mm lens combo.

On arriving at the lake I discovered tufted ducks have joined the community alongside the ever present mallards. 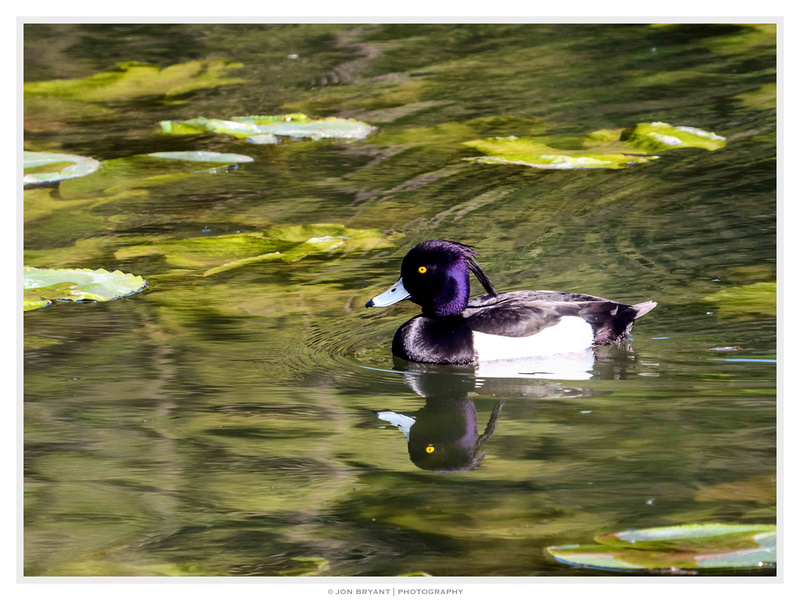 The beautiful and striking Tufted Ducks.

But what has surprised me more than anything was the arrival of a Great Crested Grebe. This got me truly excited.

But with its arrival, as well as the warmer weather a number of fishermen frequented the lake. Their presence did one single thing, put the wildfowl as far away from the banks of the lake as possible. That meant that I could see the Grebe but I couldn't fill my frame.

Therefore I returned to the lake several days in a row with one clear mission in mind - getting a great shot of that grebe!

As I walked around the lake I noticed more and more nests. These nests were coot nests. On the first day each nest had a coot sat securely on top of it not moving. 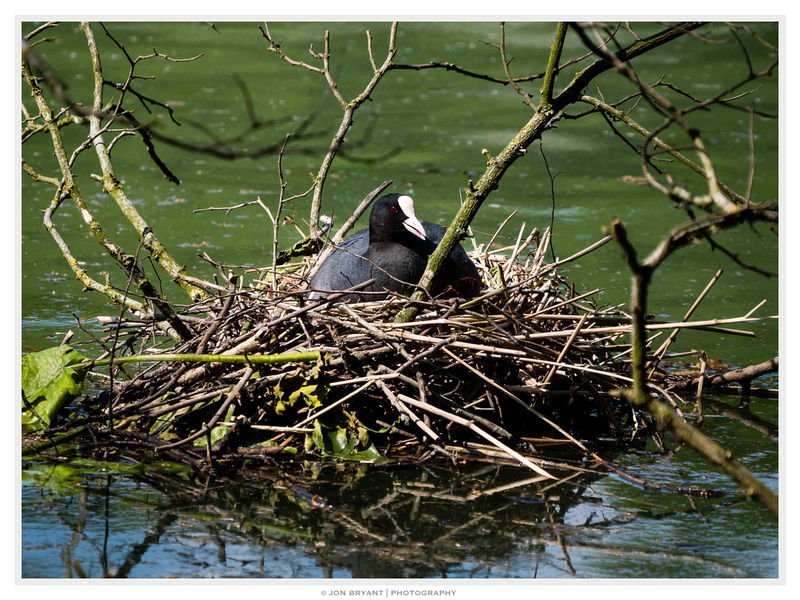 Many nests were sighted around the banks of the lake at various levels of incubation.

A number of nests were visible at different areas around the lake a few meters from the banks.

Then on the second day I noticed in one of the nests little balls of fluff.

Then on the third day these little balls of fluff had enough confidence to go for a swim.

My Grebe mission started to take a back seat! In fact I saw so much activity with the coot's that I decided to focus on capturing different elements of their behaviour. They are challenging birds to shoot because of their black plumage, it is very hard to get shots of them where you clearly see their eyes. But the coots were putting on much more of a show from a behavioural perspective than the Grebe and so over the 3 or 4 days I walked the lake in search of the Grebe shot, I built up a collection of different images documenting this important season for the coots.

Some of the behaviour is what you would expect from parents feeding their young. 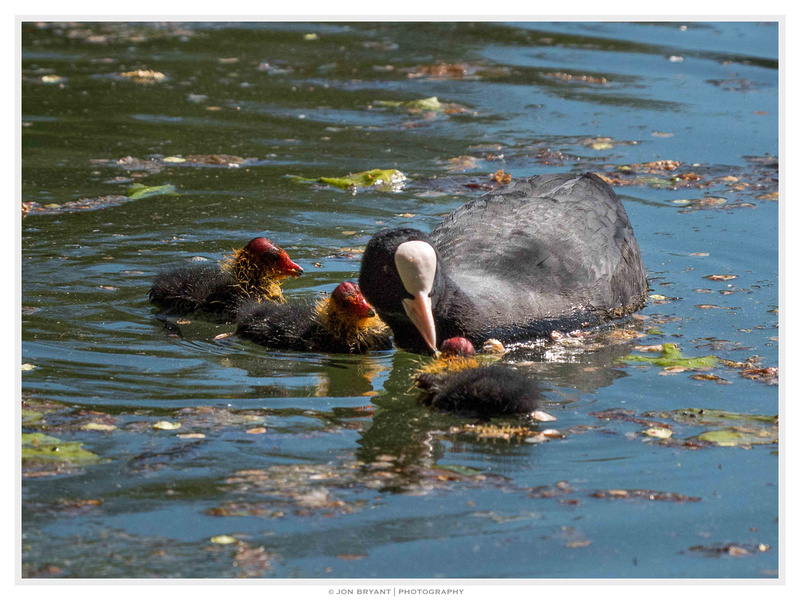 After the third day the chicks left the nest and started to swim.

The balance between being the first fed and safety in numbers. There's always a small group of chicks that works hard to make the approach to get fed first. 137mm, f6.3, 1/2000th ISO 640

But at other times you'd see brutal reminders of the pecking order where one of the parents would attack a certain chick, pecking at it's head and even twisting it in its beak. 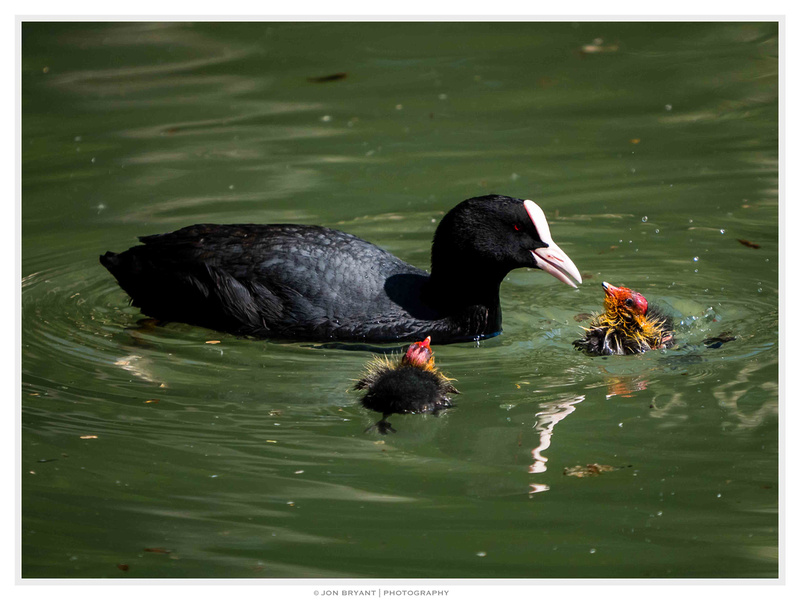 What at first looks like an innocent hand over of food...(see next image)

Some coots have difficulty raising a large brood, and the constant feeding that is required. The chicks will often constantly beg. ...sustained attack on its own chick

The parental attacks concentrate on the weaker chicks and can bee very viscous as seen here. Taking the chicks neck by the beak there is some tousling of the chick. 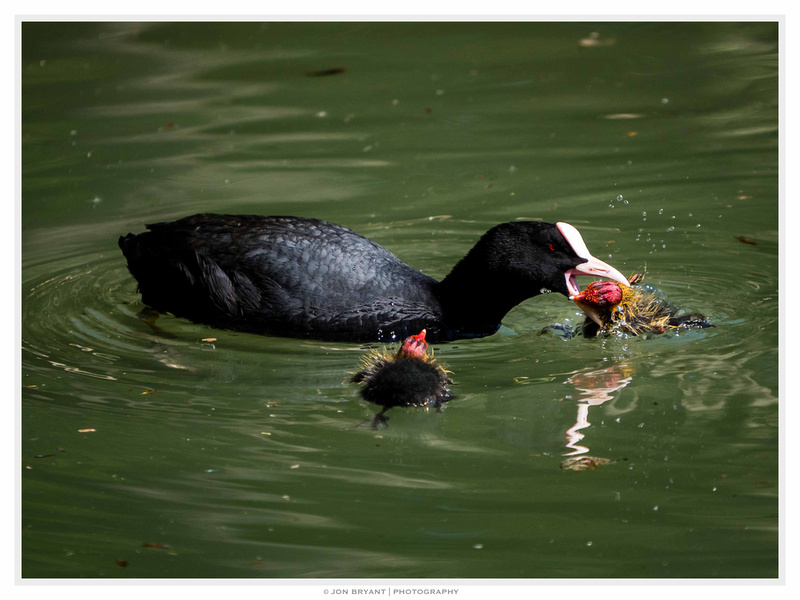 ...can sometimes become a brutal attack...(see next image)

The brutal reality of nature is that of a brood of six as was witnessed with this coot, only one or two may survive.

With different coot nests spread out around the lake it wasn't uncommon for territories to overlap. Coots can be very aggressing birds at the best of times often chasing after each other with one giving flight almost walking on the water whilst fleeing. But in one instance a lone coot strayed into waters where a breeding pair were actively feeding their brood. It didn't take long for a viscous battle to kick off, and it was amazing to see just how far out of the water these coots could get when in attack and defend mode. 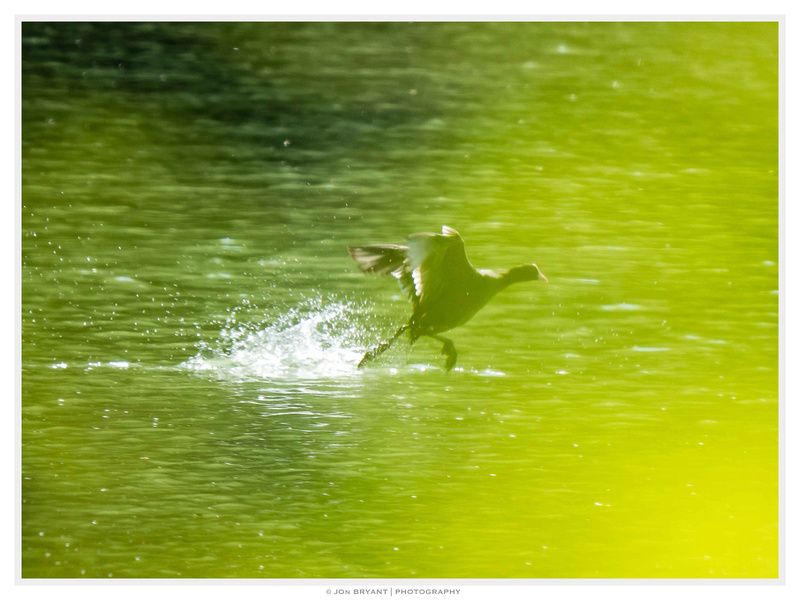 Coots in flight run across water, panning at speed with some foreground foliage bokeh

A panning image of a coot in flight. As I panned the camera and took the shot I panned with foliage in-between my lens and the subject giving the slight softness to the image and the green foreground bokeh. Despite that I like the effect. 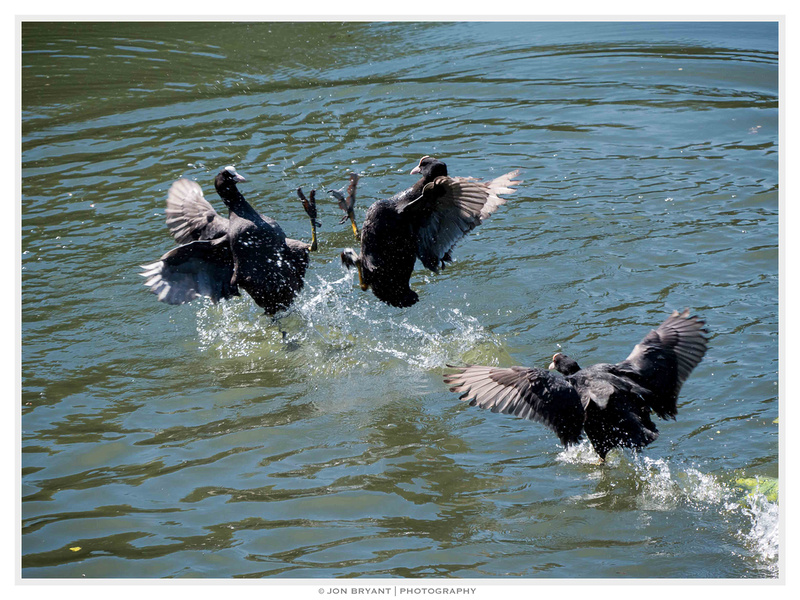 With each day I had different lighting conditions and on one morning in particular I shot an image which was much more about the light and the environment than the subject itself. This image could have been of any bird that happened to swim into this section of the lake at the moment these twinkling sun light reflections were occurring - but for me it happened to be a coot! So this image got added to the project! 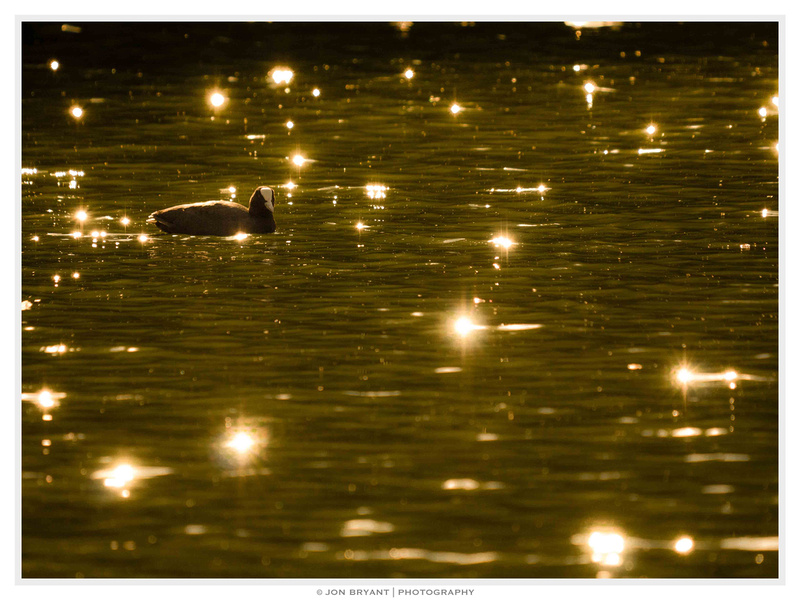 An early morning shot and shooting for the light and subject:

Whilst some of the chicks from the nests were out swimming and feeding on the lake, other coots were still sitting on their eggs and tending and defending their nests. With a little patience and sitting tight, I was able to get the moment that the coot decided to do a little nest management, giving an insight into the eggs within the nest. 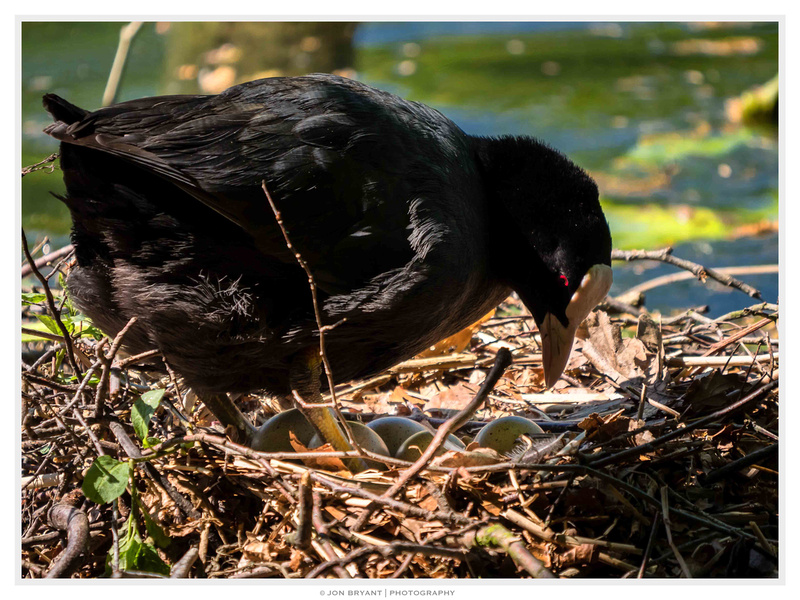 With a little patience the coot lifts revealing the eggs.

With a little patience and a focused lens, you might get lucky to glimpse the eggs.

Other coots had clearly had their brood much earlier and probably some had already succumbed to other predators. This coot I spotted with one youngster who had clearly hatched earlier and was older than the other chicks I had photographed, however he was the only one feeding from one of its parents. 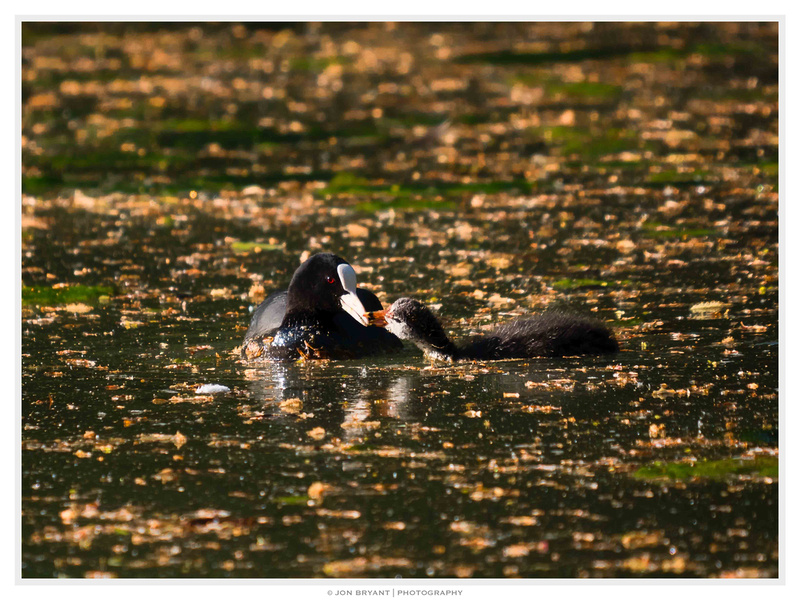 In other sections of the lake some of the coot chicks were bigger having hatched earlier.

This coot was feeding one slightly older and larger chick, but only the one. Probably the only survivor of the brood.

As I had collected a number of images showing the different behaviours of the coots at this lake, I've built a specific photo gallery which can be viewed here, showing more shots that I took.

So what happened to my Grebe?

Well you can watch the story unfold here in this video I posted on You Tube:

I did get the shot in the end! But a few days later he was gone... 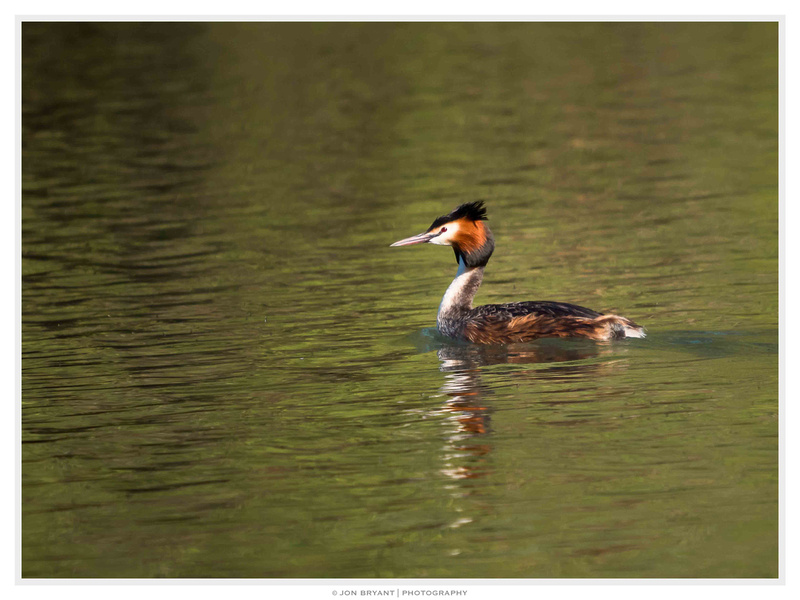 The grebe shot I spent 4 days trying to get!