The summer has come and gone and what a summer it was. Here in northern Europe we had a heatwave. And so I decided to head somewhere even hotter: Corsica.

Corsica had been a destination on my list for a long time. However this summer I had to make some compromises. Whilst I wanted to go to Corsica purely for photography, the trip I organised was also a holiday for my daughter and I. So that meant I had to compromise between the swimming pool and beach for her, and the mountains and coast for me. Life can be hard as a photographer sometimes!

Now having said that, Corsica does provide huge photographic potential, but it is a logistical nightmare. Why? Well it's very simple, infrastructure. The roads in Corsica are a nightmare. Do not be fooled by this island. It has dramatic coastline and incredible mountains. But it's a small island with a small population compared to mainland France and the result is that the roads are very narrow and wind round tight blind corners and bends. 80kms can take you easily 3 hours or more. And in summer with long days, this meant that any location you want to shoot in golden hour means either a very early start, or risk driving back at dusk or night on very dangerous roads. With my daughter, I wanted to do neither. So it was going to be day time photography only. Not ideal, but again this was a trip of compromises. And in any case, I'd already made my mind up on the first day that there was so much potential that I would return.

So what was the plan? Well I had four destinations in mind and I only managed three of them:

The first destination was Les aiguilles de Bavella, or Bavella Needles. This was about a 2 hour 45 minute drive from our hotel base, and was a challenging drive. But there were lots of incredible views to see on the way.

The goal was to get some great landscape shots with the Lumix 8-18mm f2.8-4.0 lens on the Panasonic G9. I've had the G9 for just under year and found it a superb camera for wildlife photography. But I've not really put it through its paces as a landscape camera. With Panasonic's support they provided me with the lens on loan and with some adapter rings I was able to use my Lee 100mm foundation filter kit. Most of my previous landscape work I had been using the Lumix 12-35mm f2.8 or the 7-14mm f4. The 12-35mm lens is excellent, probably my favourite and most used, but I knew that I needed something a little wider. The 7-14mm f4 is a good lens, but it has a front element that means there is no filter ring allowing filters to be attached. 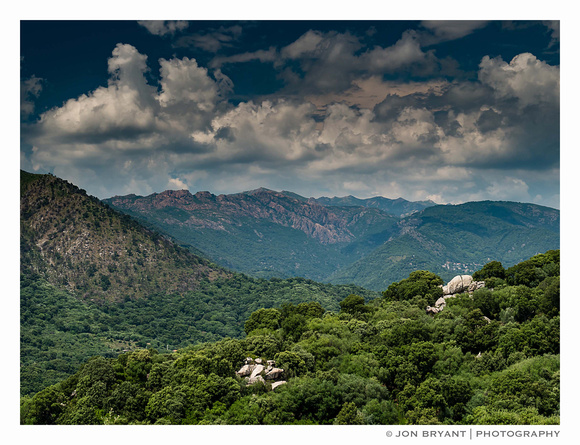 The drive to Bavella was challenging but once up in the mountains every corner had a view...but no where to stop. It was beyond frustrating, but a blessing in disguise. If there had been places to stop I don't think I would have ever reached the destination! On route you would pass these small mountain villages. Each one very characteristically Corsican but with their own distinct charm. 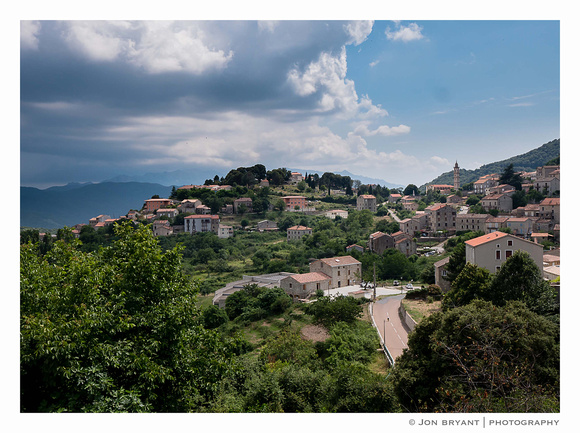 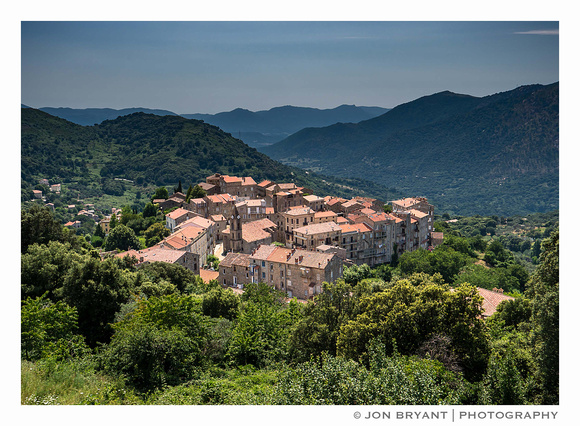 The further we climbed in elevation we started to see a distinction in the weather. The blue skies and sunshine were behind us and the dark storm clouds were in front of us. Finally we came to one of the last villages and we could see the Bavella needles in the distance with storm clouds and thunder in the distance. I found a place on the side of the route and was able to grab a very quick handheld shot before the rain started falling. 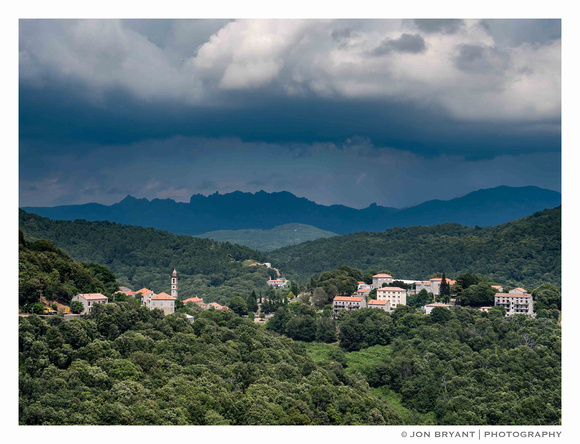 On arrival we were able to park relatively easily, and despite being in peak tourist season there were not too many people visiting and just one or two tripods present with other photographers. The views were spectacular. But due to the long drive to get there, it was important to work the scene relatively quickly because I didn't want to have to drive the challenging roads at dusk/fading light. 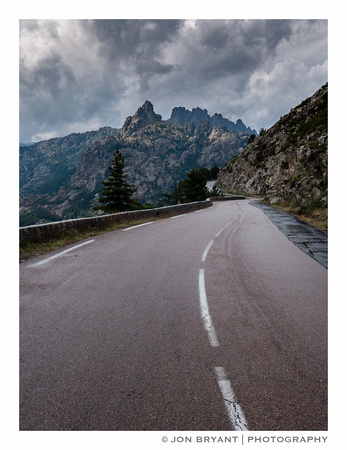 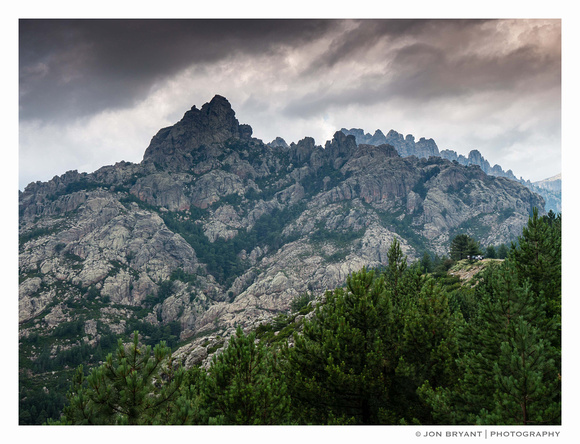 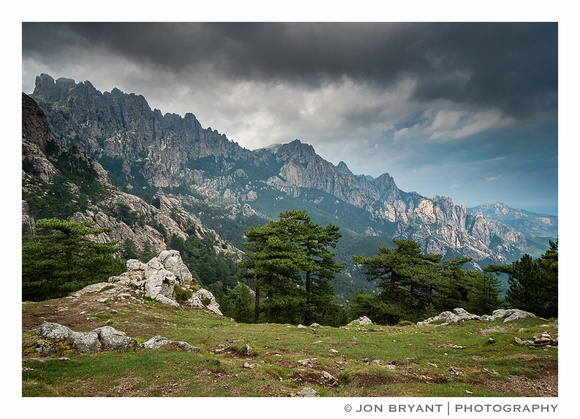 The main view of the mountain range. 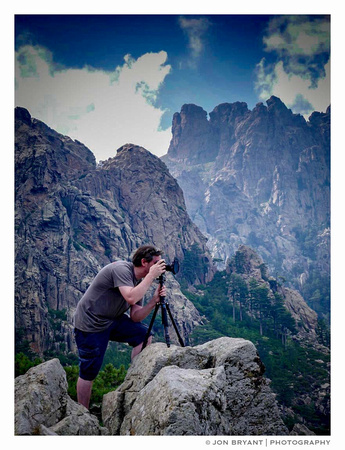 A photo of me in action taken by my daughter when I wasn't looking! 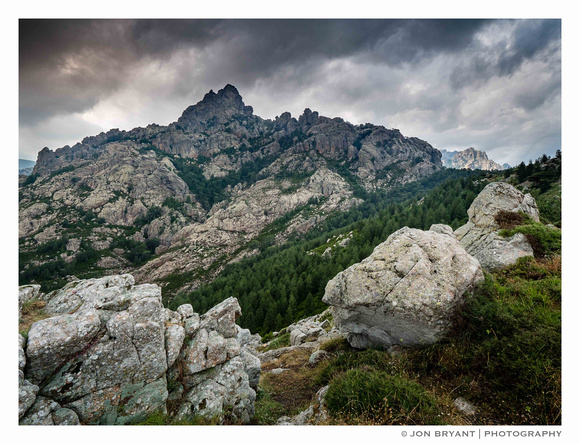 Another photo of the mountain range from the approaching vantage point. 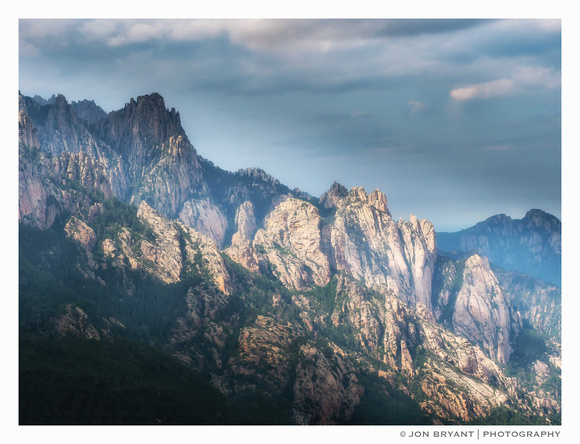 The occasional ray of light would illuminate the range and cast highlights and shadows. 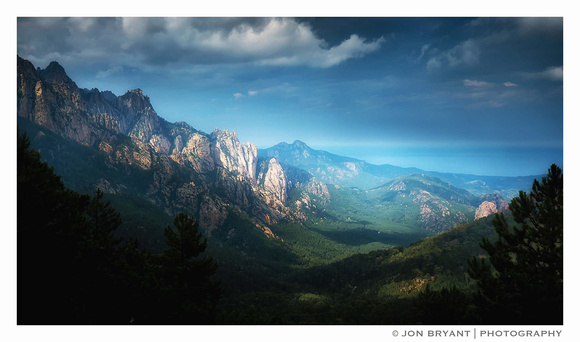 Shadow and light: the contrast as the clouds moved allowing light patches to highlight certain contours of the landscape.

Working fast requires concentration, and being in a mountain range you must think safety first. It can be tempting to put yourself in a specific vantage point to try and eliminate a certain compositional element, especially foreground elements or trees. My advice is to think before you move your tripod. Observe your surroundings and stay safe, make sure you have good footholds. Wear good shoes with a good sole and ankle support. Do not climb on to rocks if you can't see your route up or down. No photo is worth your own personal safety. The good news is as Bavella is a tourist destination, for the most part the views are very accessible, except in a couple of instances where I saw people climbing on rocks or descending inclines in order to get a better view. My G9 was locked on to the tripod and I had the foundation filter kit attached to the 8-18mm lens. I would carry this over my shoulder from spot to spot. The only filter that was permanently attached was the circular polariser. Once I had spread the tripod legs, I would determine using the exposure meter, and also my own eye, if I required and ND grad. ND grads are often a necessity when shooting during the day, especially in good light where there are significant clouds. The clouds just diffuse light and create blown highlights. ND grads can hold that back and allow you to better expose (nor correctly but better!) for the foreground elements. This will give you balanced exposures. But it is always worthwhile looking at how the light is interacting with the landscape. The last image I posted in the sequence above, I exposed for the key light, allowing greater areas of shadow which helps accentuate the contours in the landscape.

With Bavella done, it was time for the return trip. Another 2 hour 45 minute drive but via a different route. About 1 hour in, we passed a national park which was a world heritage site (shame on me, I forgot the name), but there was a stopping area which afforded an incredible view towards the Bavella needles we had just photographed. 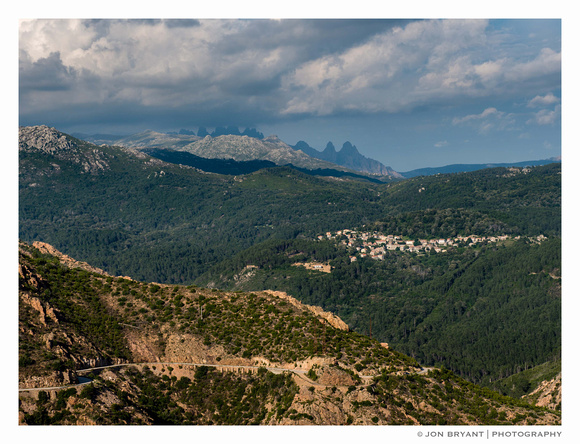 The spectacular view of the Bavella Needles, with foreground village in the mountains.

The whole experience from hotel to Bavella and back again took around 8 hours. This was no mean feat with my daughter in tow, and she was incredible patient with me. I am glad at least she got to see some of the real Corsica beyond the swimming pool and beach. But as a Dad I realise that these types of trips can be very boring for a young teenager. It was after arriving back at our hotel village just as the sun was setting that I decided to not try and attempt Bonifacio. Looking at the map, it was going to be a very long haul again from Porticco where we were based just south of Ajaccio, to do a full day turn around. I decided I would leave Bonifacio for another trip when I would return alone.

If you are travelling to Corsica purely for photographic purposes my advice would be to pick 2/3 locations and stay locally. Work those locations and then move on to the next location during the day. Like this you will free up golden hour at sunrise and sunset.

In part 2 of this blog I will cover the other two locations I visited: Les Calanques de Piana and La Tour de Parata.