In part 1 of the blog I talked about the experience of visiting Les Aiguilles de Bavella in Corsica with the Panasonic G9 and 8-18mm f2.8-4.0 lens and making a landscape photography mission.

In part 2, I'll share with you the other two locations I visited which were equally stunning but very challenging photographically for different reasons.

After a long drive to Les Aiguilles de Bavella, I was conscious that it wasn't easy to get around in Corsica. I decided to head to Les Calanques de Piana. It is a Unesco World Heritage site, and is situated between Ajaccio and Calvi. The good news for this locations is that the roads heading north once you espace Ajaccio were a little wider and easier to drive on. At times they prolonged the coast which afforded some spectacular views, although again the options to safely stop the car and get a photo were few and far between. One of the few spots you could stop was a cliff top bar with a car park that afford a view on the Golfu di Liscia. I jumped out the car and took a very quick shot with my LX15 point and shoot. As it was a car park that served the bar, I didn't want to overstay my welcome based on not being a patron. But I did want to get a shot of the view... 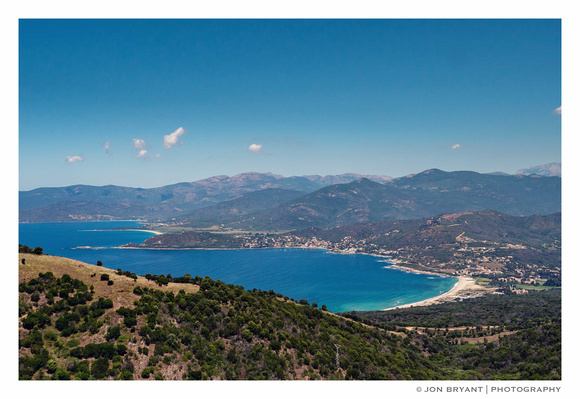 View over the Golfu di Liscia

The other side of the bay, there is a small village called Tuccia and a long stretch of beach. Eventually you reach a bridge that goes over a river that runs to the sea, and there was another parking spot to be able to get a quick shot of the river and the mountains. 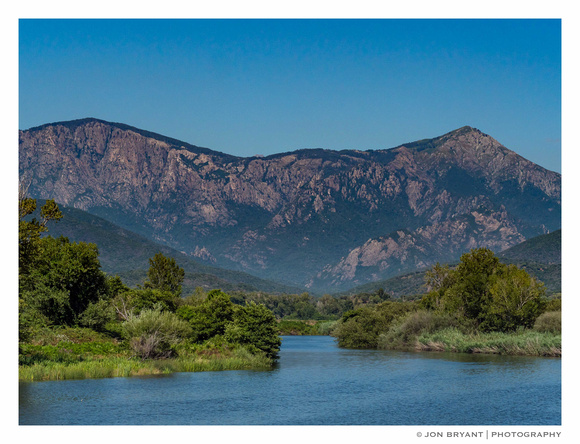 Now with those two photos I took on route you see the issue I faced. The skies were absolutely blue. No clouds, nothing. And the light was very harsh. This created a lot of challenges in trying to achieve balance between foreground and background subject interest. But these were just two opportunistic shots. I was still hopefully to get some good shots on arrival at Piana.

The "gateway" to Piana is Cargese. I would have liked to have spent a bit more time in this village, but unfortunately it wasn't to be. On the north side of the village as you head on the road towards Piana there is a vantage point where you can park and get a sneak peak as to what lies ahead. 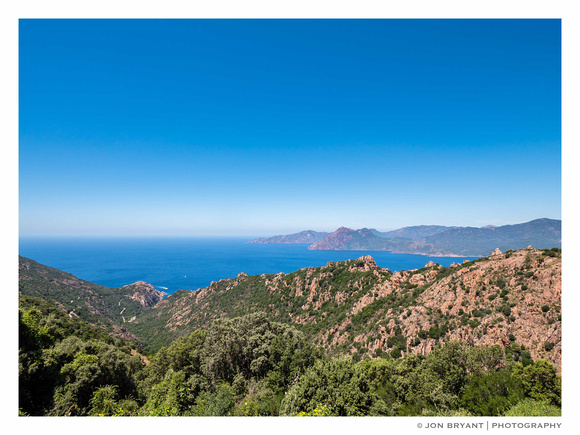 View at Cargese: to the lower left you can see a pathway down to the coastline

Not far after Cargese, you arrive at the entrance to Piana. The road is narrow. Very narrow with blind corners and very few stopping places. It is very touristy and as a result you have cars trying to park and people walking on the road. Add to this coaches trying to pass and you have quite the dog and pony show. It's far from ideal. However there are rangers on mountain bikes at the start and the end of the road. They patrol, and do a good job in moving people along and managing the sticking points which are often coaches trying to turn a blind corner and being confronted with a car taking up the width of the road. I was lucky. I was able to find place to park the car along the route at most main sections. So I could get out and explore and set my tripod up and start looking for compositions. The site itself is absolutely stunning. I have no regrets whatsoever in visiting there. However, photographically it was really a mixed bag. As mentioned before, the light was very harsh. And so this gave very high contrast images. I used my soft ND grads as appropriate and my circular polariser to try and increase the saturation and control the exposure in the skies. The filters were attached to the 8-18mm f2.8-4.0 lens through the Lee filters foundation kit. 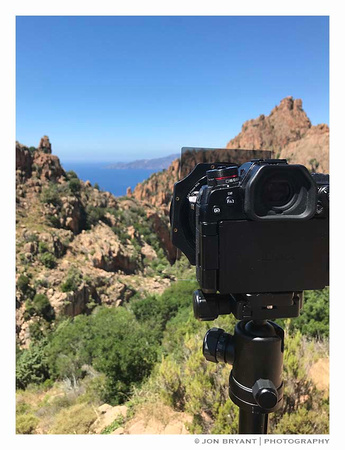 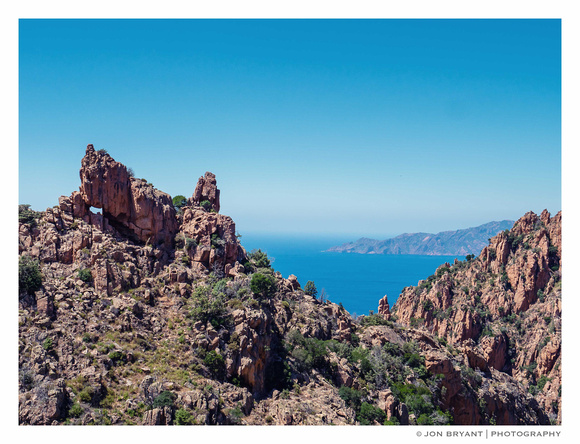 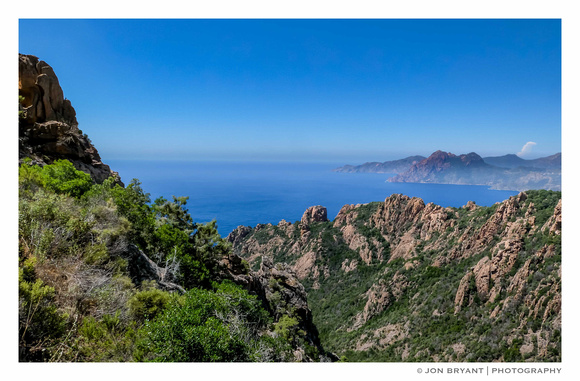 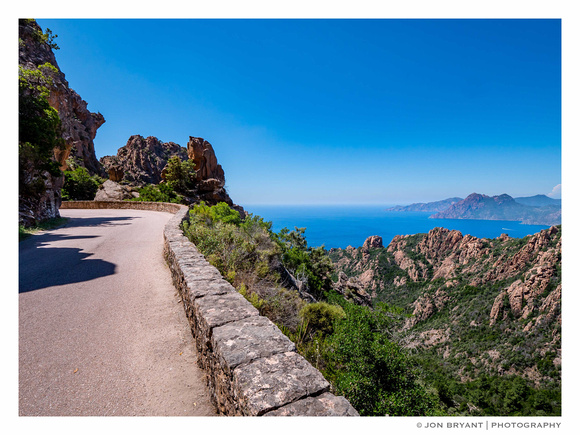 Second view on the Piana coastal road, with a wider view to show the road to the left: Taken on Lumix G9 with 8-18mm f2.8-4.0 lens 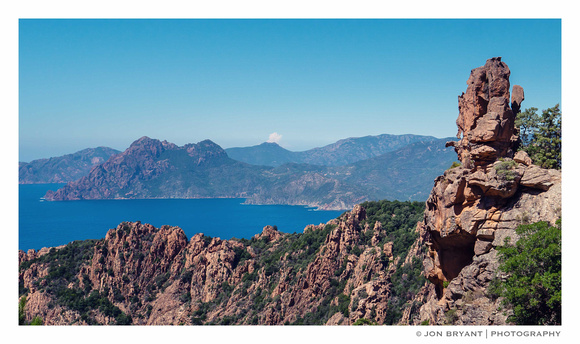 The 8-18mm lens was perfect for this type of landscape photographer whereby control of composition was very limited. As I was restricted to certain access points on a road, it wasn't easy to reposition in order to include or exclude various compositional elements. So having the focal range available allowed me to zoom to exclude elements as needed, and then make slight tripod repositions as needed. This type of photography is far from perfect, but you have to work with what you've got. There were many compositions, and some I've included where I would have loved to have moved into a different position specifically to change the angle, but was unable to. The other issues I already eluded to was the light. Unfortunately I couldn't arrive any earlier. But a softer and more reflected light on the cliffs would have made for much more compelling and ambient images. Being there in the middle of the day with clear blue skies and harsh light created very contrasty images and I must admit I have mixed feelings about the end results. But that's the risk with landscape photography, you win some you loose some...but I'm not a photographer who will show up, not like the conditions and not take a photograph. When I show up, I try and make things happen and then decide on the results afterwards. I'm always amazed when I see Landscape Photographers, especially those who vlog declare they didn't take a photo because the conditions weren't working for them. I believe that you can always learn something in the realms of camera craft independent of conditions.

The final location I visited was La Tour de Parata. This is located west of Ajaccio, and was visible from my hotel balcony. As I watched the sunset light up the sky most evenings, I became increasingly impatient to get over there and do some golden hour sun set photography. 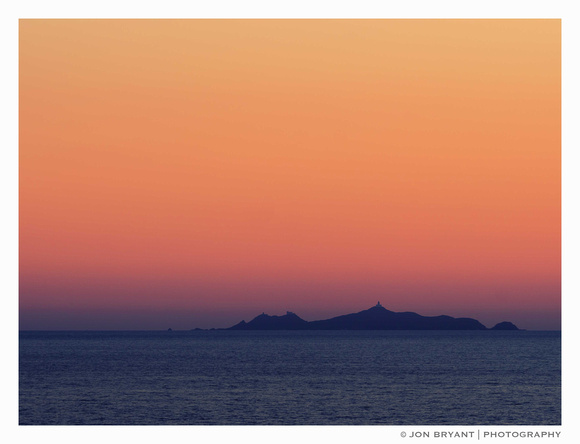 The view of the Tour at sunset

When photographing any location at sunset the number one rule is: get there well ahead of time. And of course on this occasion I didn't! I'd left it right down to the wire. And on arrival I wasn't sure what the best approach was. I decided to climb the hill to get an elevated view. This on reflection was the wrong decision. And it reflected on the fact I hadn't really done enough planning in the location. So once I was at the top of the hill I realised I wasn't where I wanted to be to get the image I had in my mind. I thought I could get the three islands in the composition, with good separation, but the reality was very different. 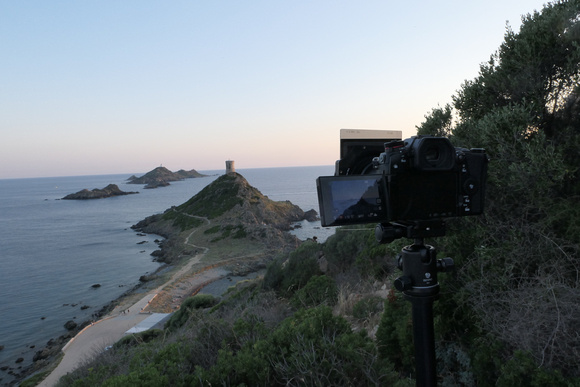 Quick iPhone shot of my G9 with filters looking down on La Tour de Parata. Yes the Horizon isn't straight ;-)

Even so I decided that after a speedy hike up this hill, it was worthwhile taking an image anyway and then hot footing it back down and around to the right side of this hill, but at the base of the hill to be able to get a different angle on the subject. Because of the service road in the foreground I had to switch lenses from the 8-18mm to the 12-60mm f2.8 to eliminate the foreground and close in on the subject. I used a Lee big stopper to try and smooth out the sea, however this didn't work as well as I hoped. The resulting image was acceptable but not what I was hoping for. 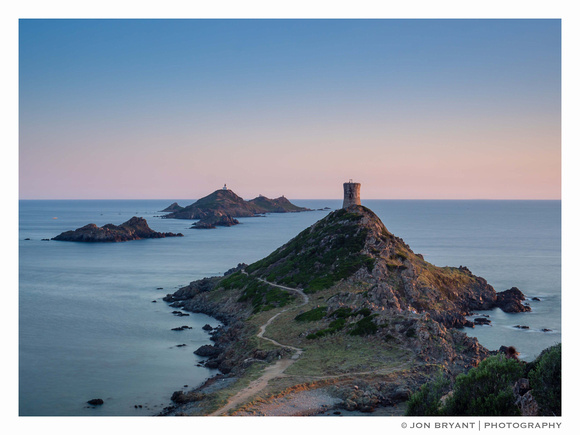 Once I was lower down and in the right place things were much better and easier. I can't stress this enough, even though I don't always put it into practice; getting yourself in the right spot to work the light rather than the location is a better strategy than trying to run around and get multiple compositions in fading light. 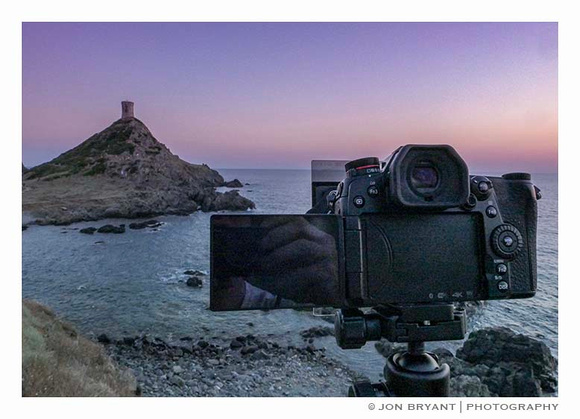 Quick iPhone shot of my G9 in the right location for the shot I was looking for.

The sun had by now just started touching the horizon, but it was too my right. This I expected because from my hotel the sun set behind the peninsula and so I knew that at the location I would be shooting away from it. The question was, how much colour would I get in the sky. The sky was clear with no cloud interest. So as the light faded I decided to wait around 20-30 minutes or so to see what changes in colour I would see. It was worth the wait because the sky did indeed change colour. 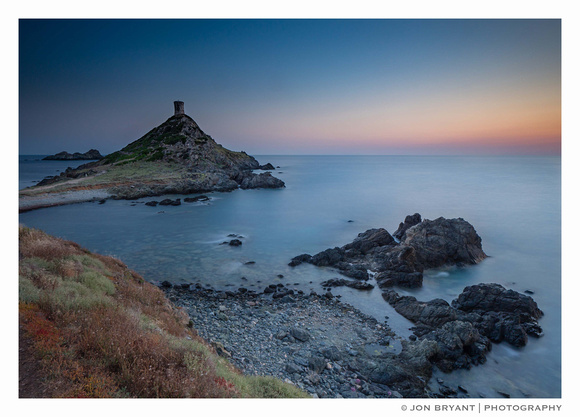 Now with the fading light the Lee Filters came into play, especially the Little and Big stoppers which allowed me to smooth the sea out. I am very happy with the resulting composition. There are some foreground elements which I could not eliminate and had to work with. Ideally I would have had access to the pebble beech below which would have given me a strong foreground anchor. However this was inaccessible as it was a cliff drop down to it. In the end you have to work with what you have and not take unnecessary risks to get an image.

I have been very impressed with the 8-18mm f2.8-4.0 lens. It is really wide and the perfect lens for what I call "big vista" landscapes. It accompanies the 12-60mm f2.0-4.0 lens very well with good focal range overlap. The two lenses combined with the G9 would give me a great range of versatility for landscape and nature photography. The added bonus is that these two lenses are light and compact and that is always a bonus when travelling, walking or hiking into a location. Both have front filter rings which with some adaptor step up rings allow me to easily fit my Lee foundation kit, giving me additional options based on lighting conditions.