Landscapes and Seascapes on the Belgium-French border

In my last blog I wrote about visiting a Wildlife Photography Exhibition of a friend (Carole Deschuymere) in DePanne, Belgium. As I left the exhibition I quickly stopped by the beach to catch an amazing sunset. In fact I was late and the sun had already set. But I was impressed by the colours and that inspired me to return. So two days later I did. It was as always, all dependent on the weather. May day fell on a Sunday this year and so I gave a shout out to my photography club colleagues that I had 3-4 spaces in my car and for those who were keen to be ready to get the nod late on Saturday afternoon. Whilst some members of the club expressed a keen interest, the timing didn't suit. My friend Marco was the only one who could join me at a drop of a hat. Rule number one in Landscape photography is that you have to be flexible and be ready to go based on the weather.

This flexibility is so important because the coast is a 2 hour drive from where I live. The worst case scenario would be driving all that way to find a thick layer of dense grey cloud obliterating all hopes of a gold hour sunset. This can so often be the case in Belgium and that would have meant a 4 hour wasted round trip.

I did some homework before setting off thanks to Google maps and the satellite feature. The beaches in Belgium and northern France aren't the most spectacular in terms of features. There are very few if not any areas where there are cliffs. For cliffs you have to travel about 3-4 hours south to the Baie de la Somme. The beaches on the Belgium coast are relatively flat and sandy. So with that in mind the plan was to try and find some interesting foreground features that we could compose for. My first idea was to head to the French side of the coast to Bray-Dunes where there is an old boat wreck submerged in the sand, and exposed at low tide. It is very well submerged but would have created some foreground interest. Of course that composition is dependent on a low tide, and sunset time coinciding. Which was the case, but I decided to save that for another day. Instead, discussing with Marco we decided to head for the Nature Park "Westhoek". We arrived well ahead of time and parked up, heading straight into the nature park. After 10 minutes we came to a very striking conclusion. In fact two conclusions. The first we couldn't see the beach or the sea. The second, there was no access from the reserve to the beach. Now I understand that the local authorities want to avoid people walking through the dunes and damaging them. I completely get that. But what is the point of having a nature park built on the dunes if you can't actually access them to view their beauty? It would have been great if there had been a boardwalk from the nature reserve to the beach that gave a nice elevated walk to view them. I understand why it wasn't built...it would attract people who wouldn't respect it, who would jump over, create litter and so on.

I captured the whole 'mission' in my second vlog style video which you can watch on my You Tube channel here (below), whilst the rest of this blog shows the images I captured with some basic explanations.

With our first plan scuppered, we headed to the beach. We walked the fence line along the beach and the nature reserve. At points the sand actually engulfed the fence posts and barbed wire and it would have been easy to hop over and walk in. Let me say categorically that is the wrong thing to do. Fences should be respected, they are there for a reason, and in this case it was to preserve the grasses and flora growing in the dunes. Instead we explored the fence line where the dunes blended into the beach looking for some foreground interest. 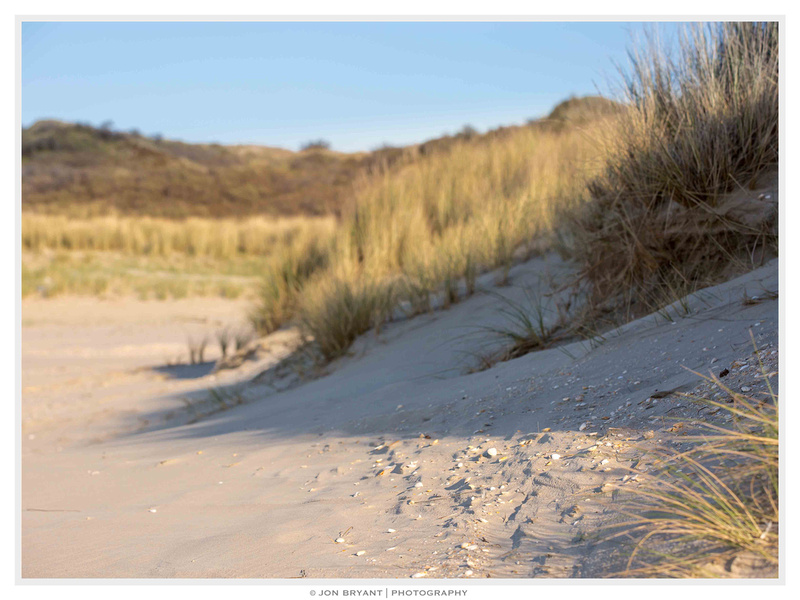 I liked the shadow and light, and the contours of the sands speckled with sea shells and stones in the foreground. This was shot handheld with the 70-200mm f2.8 lens, lying down with the lens just under the barbed wire fence.

Walking the fence line I liked how the top of the dune gave a lead in line to rest of the scene. I exposed for the foreground to emphasise this. I shot this handheld with a 24-70mm f2.8 lens.

After exploring and walking for sometime our GSMs beeped. We'd both got notification we'd crossed over from Belgium into France. Or at least the French mobile phone companies signal was stronger than the Belgium one!

My first image was a surprising one. And unexpected. And opportunistic. I'd set up a composition to make some test shots ready for when the sun hit the horizon. Whilst doing so, a couple of gyro-glidders (I think that's what you call them), took off right in front of me. I've heard many a photographer say, "never shoot directly into the sun". I would always challenge some of these "rules" if it means you can get a creative composition. 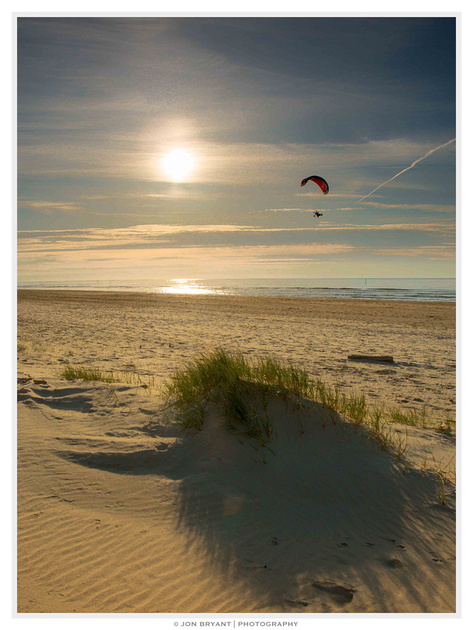 I had set up to do a couple of test shots to see what I could get compositionally from this small dune and the ripples on the sand, when suddenly this gyro-glidder took off in front of me. In fact there were two, and I managed to get an image of the second one just after he passed the sun. Unplanned, unexpected, but an effective result!

Whilst waiting for the sun to set we went closer to the waters edge originally with the intention to create a seascape with two yacht's. The yacht's moved quicker than we anticipated and were directly under the sun as we set up our tripods. However I noticed a bird on a pole in the sea. It was quite far out and I wasn't able to identify it by eye. Later when I imported my image I was able to see the distinct silhouette of a cormorant. I was really happy with this composition as it combined wildlife with landscape photography. I only had a 70-200mm f2.8 lens with me, and if I'd had my 300mm with 2X teleconverter I would have got a great shot, but had to sacrifice my filters. Sometimes in photography it is better to keep things simple and stick to my personal wildlife photographic philosophy of "animals in their environment". The result image for me was a real surprise and proof that sometime in photography it pays to stay flexible in your surroundings and create imagery. 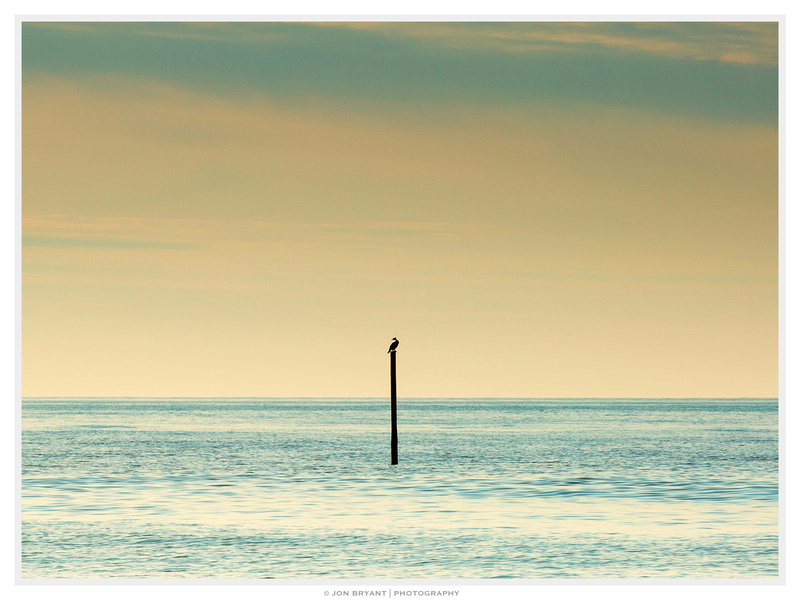 My favourite image of the day. Totally unexpected. Having observed the poles from the beach my technical brain was telling me they were too far away for an effective composition. As I approached the shoreline my creative brain kicked in. Spotting the bird, I realised that if I got pin sharp focus on the subject with a slight crop in Lightroom this image would work. The key to this was to expose for the sea and sky, and the resulting silhouette is very striking. Bird experts will easy i.d. it!

Staying next to the sea the wait continued and once the sun had gone behind the clouds I captured one 'seascape' before quickly retreating to the dunes to get set up ready for the actual sunset. It is always good to get set up ahead of time. Sunsets happen in the blink of an eye when you are photographing them. I always remember the first time some years ago I tried timelapsing a sunset and I remember being so frustrated I hadn't arrived sooner. I'd set my camera up and within 5 minutes the sun had disappeared. That was a very valuable lesson in landscape photography! 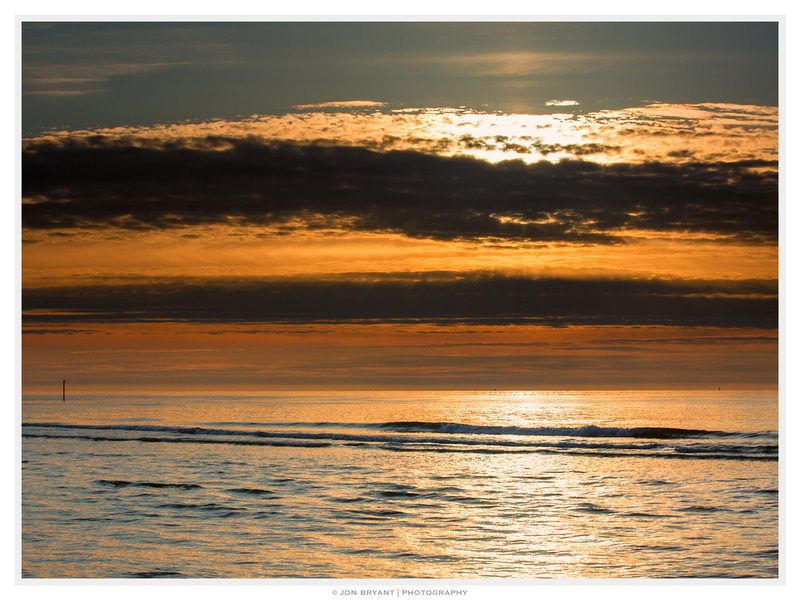 Using a soft grad and polariser, the sun provided the most intense colours when it went behind the cloud cover. The white glare on the sea shows that the light was still intense at that time. Underexposing was key to creating this image. On the left of the frame you can see another one of those poles. I decided to leave it in the composition.

Retreating back to the beach, I set up with a small dune and grasses as foreground interest. There is a large section of beach between the dune and the sea and the element I was debating was lowering my camera further to try and eliminate this. After a few attempts I realised that it just skewed the composition in terms of the shoreline and the horizon. As the angle of the shoreline was not perfectly horizontal, having some of the beach in the composition helped the viewers eye. Without it, the horizon and shoreline for me were conflicting. I took two shots with different exposures, one exposed for the foreground and one exposed for the sky and blended them to get the final image of the day. 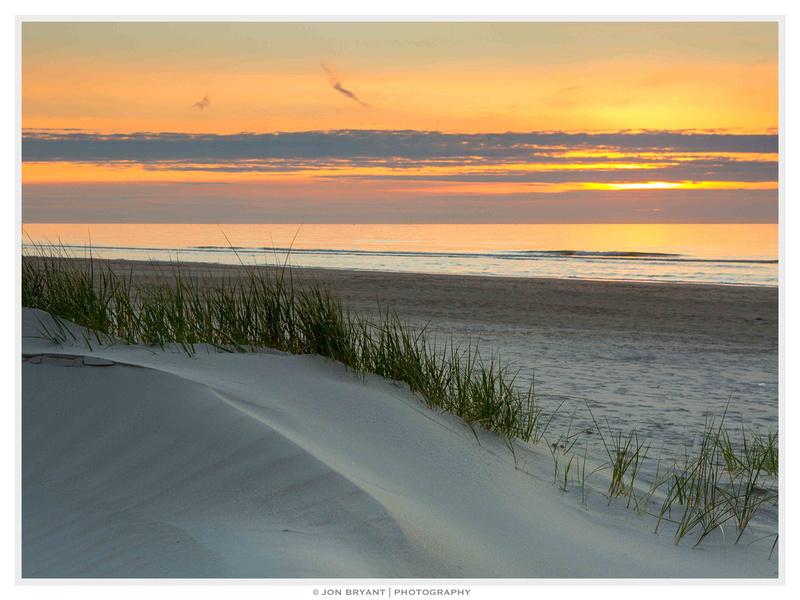 The final composition of the day proved the most challenging. The dune was cast in shadow with very cold light. I chose to shoot two exposures for a blended final result to get some foreground detail with the patterns in the sand. I debated lowering the camera angle and tried it, but felt the shoreline angle was better composed by including some of the beach in the composition (despite all those footprints!).

What amazes me each time I photograph sunsets is just how much the colours change as the sun drops and how much the cloud also impacts the colour strength in the image. As the sun just dropped behind the cloud in my seascape image, the shadows and colours are more intense. Once the sun was just above the horizon the light softened considerably with less harsh shadows in the clouds.