As much as I would love to be able to jump in my car and with a few hours be self driving in a big 5 game reserve on a weekend, unfortunately the reality of where I live means I have to adapt to the local conditions!

Ever since I started wildlife photography I have maintained that bird photography is one of the most challenging disciplines. For a start it requires very long (and sometimes heavy) lenses with focal lengths of 500mm plus. It requires incredible patience, a very keen and sharp eye, and incredible camera craft and skill. Of all wildlife photographers out there, the ones that get my respect the most are the bird photographers. They are a dedicated and highly skilled group of photographers. Having tried to capture birds in flight, I know just how difficult it is to get the shot. So when I see incredible images of birds of prey in flight, kingfishers diving and coming up with a fish, or an african fish eagle with a successful hunt, I am astounded at how the photographer has captured the shot. 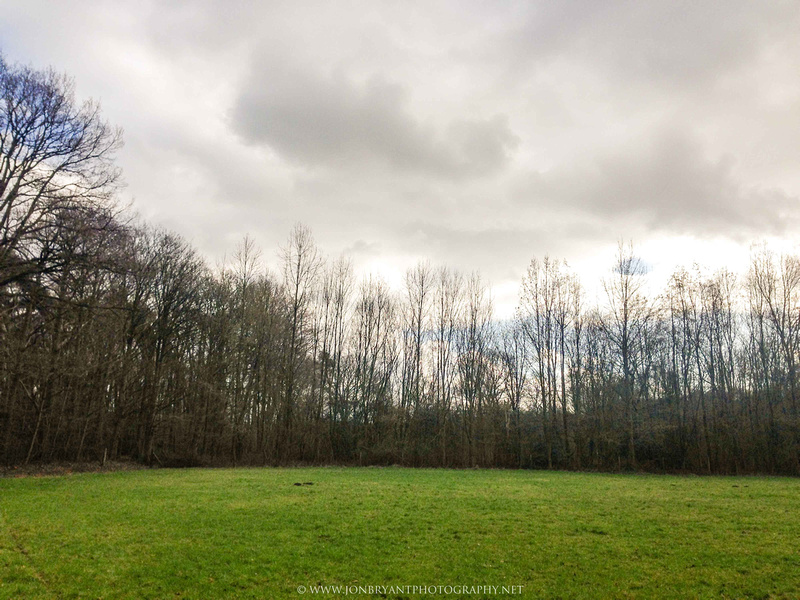 A soggy field & winter woodland in the north of Belgium - from this view you would never know of the photographic potential lying within (iPhone pic).

I've become increasingly more interested in bird photography the past 12 months. During last years trips to Africa I was coming back with more and more images of birds. The challenge was always trying to remember the name of the bird you shot once you get back and start to look at your images! But given birds are something I can easily find on my doorstep, I've started to put more effort into bird photography. I will admit, that my knowledge of birds is very low. I think this is something that attracts me to do more bird photography, identification. One thing I did at the end of last year was invest in a good birding book. I've bough the Collins European Guide to Birds, pretty much the authority for birding in Europe.

This winter I had a plan to actually set up a hide in my garden. I had observed both Blue tits and Great tits, Robins, and even Jays visiting on more than one occasion. The plan I had in mind was to set up some bird boxes in the the trees and then some feeders along with various perches that would allow me some control to the subject location and the backdrop. The backdrop which would impact the depth of field and bokeh of the image is so important given I live in an urban area with a small garden. In the end I postponed my back garden hide for a very simple reason, weather. This winter has been so mild we have had record levels of rain water. This in turn has mean that our garden is more of a marsh bordering on a lake! So I have postponed plans until Spring/Summer when the weather drys out a little. 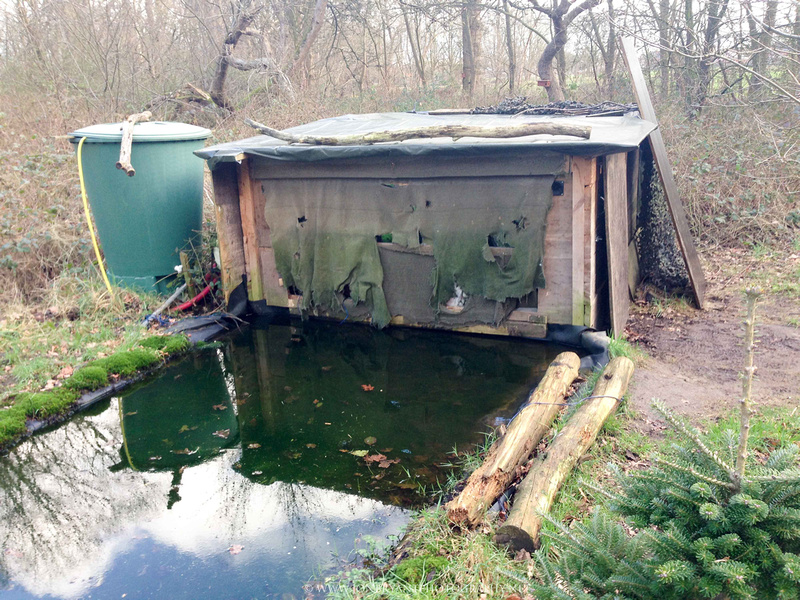 The view from the outside of the hide. Inside you have to work on your knees, but it is still very comfortable and heated (iPhone pic)

In place of this back garden project I found some bird hides in the north of Belgium. They are operated by a local land owner who has a total of 8 hides and is constructing a 9th. Having that number of hides gives an incredible diversity, including a grassland/marshland hide, and a little owl hide starting from April/May each year. I decided for my first hide session to reserve one of the more general hides which had a small reflection pool. This hide was well known to be very productive with several species of birds and so I envisaged coming back with some diversity of images which would be a good first initiation to bird hide photography.

The hide was situated in a secluded woodland, and given all the rain we'd had, it required a soggy walk to get there. But inside it was very comfortable with good seating and heating. There was a window, meaning the hide was closed, with the exception of two low floor level portals which could be used to get low angle and reflection shots. My reservation started at just after 8am.

The first thing you noticed was the lack of natural light shooting in winter. I had my Canon 5Dmkiii with the Sigma 120-300mm f2.8 and the 2X teleconverter, giving me a focal length of 600mm and a lowest f stop of 5.6. I set up my camera in aperture priority mode and dialled in my "go to setting" which were f6.3 and ISO 800. I pointed the lens out of the window, took a look in the viewfinder and saw a shutter speed of.....wait for it....1/25th. WHAT?

Now, I've shot wildlife at 1/25th before, but normally when I'm in creative mode, panning shots and so on. I use slower shutter speeds after I've banked my shots. I never start a days shooting at 1/25th of a shutter speed! I needed at least 1/320, preferably 1/600 of a second with the focal lengths I was using. Ideally I wanted 2X the focal length of 600mm so 1/1200th. I was using a tripod so I knew that pushing the ISO up would help the shutter speed. But even going to 1600, I was getting 1/125th. I dropped to f5.6, my 5dmkiii now showed a shutter speed of 1/160. 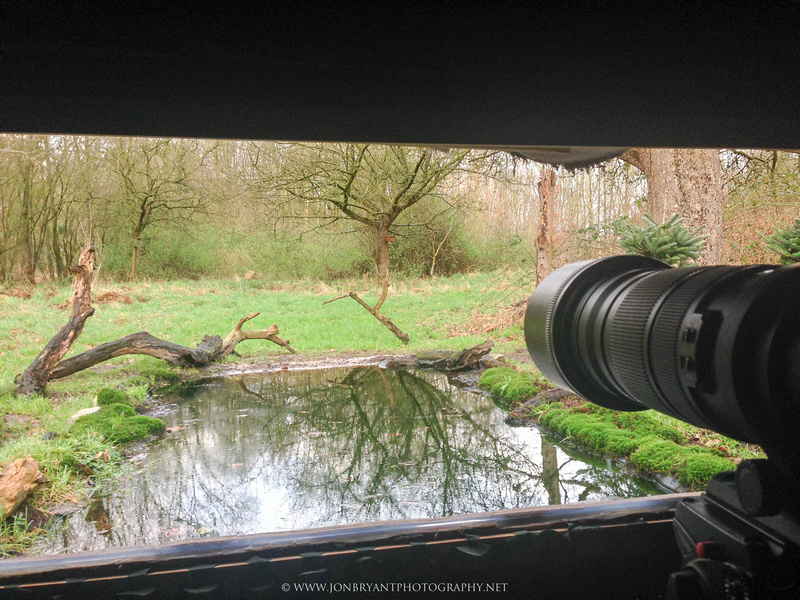 My view during a 6 hour session (iPhone pic).

As the birds landed in front of me, I poured a hot coffee from my thermos flask and watched and waited. It was a grey, dull, windy day and the surrounding tree cover (even without leaves) held back what little light there was. I needed just a little more light to get a shutter speed that meant I was going to get sharp images. Observing birds you realise that they have very erratic movements. They move very quickly, even their heads seem to move in a staccato movements, almost twitchy, micro movements...and if you don't have a fast enough shutter speed, you won't get your subject close to being sharp. However with all the bird activity outside, the temptation to start shooting even with such low light took over. The arrival of a red squirrel was a welcome distraction. Even though this red squirrel moved quickly, compared to birds this was a subject I could photograph at lower shutter speeds. 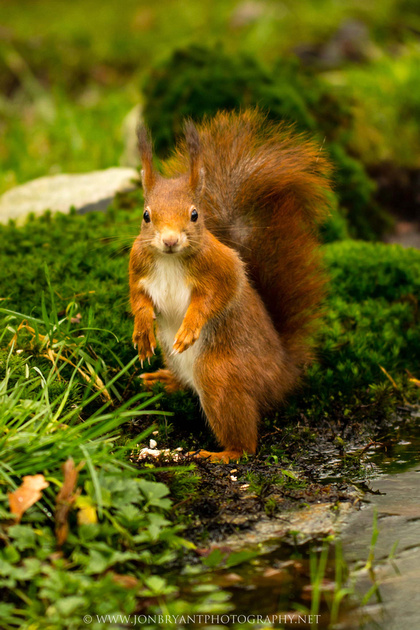 Around 10am the cloud thinned and light started to come through. Fortunately there was a constant turnover of birds visiting the hide. Most notably a pair of great spotted woodpeckers. With their striking black and red plumage they were frequenting two tree stumps which straddled the hide just in front of me.

At one moment I had both the woodpecker and the squirrel in the same frame. That made for an interesting and unusual shot, both subjects seems completed unperturbed by each other presence. Because of the lighting conditions I decided to use a shallow depth of field and focus on the foreground subject of the woodpecker. The subject separation could have been slightly better, but under the circumstances I am happy with the shot. 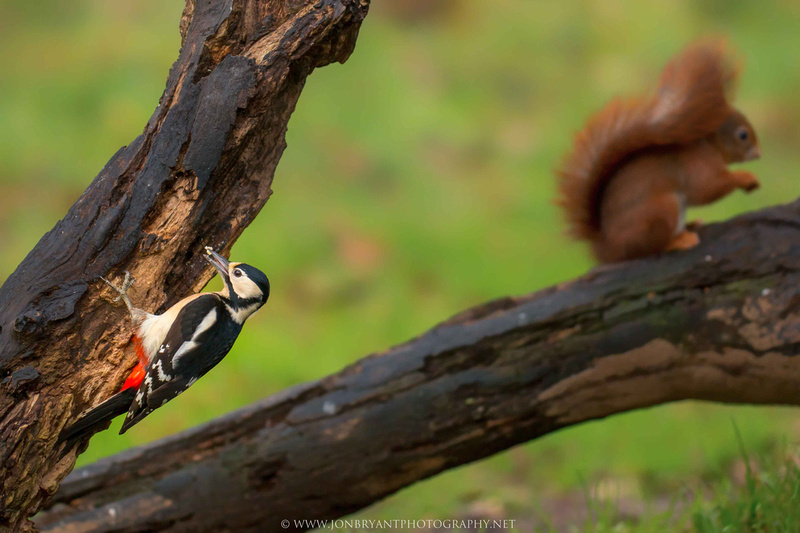 The woodpecker and the squirrel

The woodpecker and the squirrel.

There were plenty of Chaffinches that came to visit, along with Bramblings. The Bramblings were particularly striking with orange plumage. I was hoping to isolate one on a perch, but unfortunately I didn't get that shot. They tended to be flock ground feeders and I could never really isolate one in the way I wanted. The Chaffinches on the other hand were pretty aggressive and tended to force their way in. 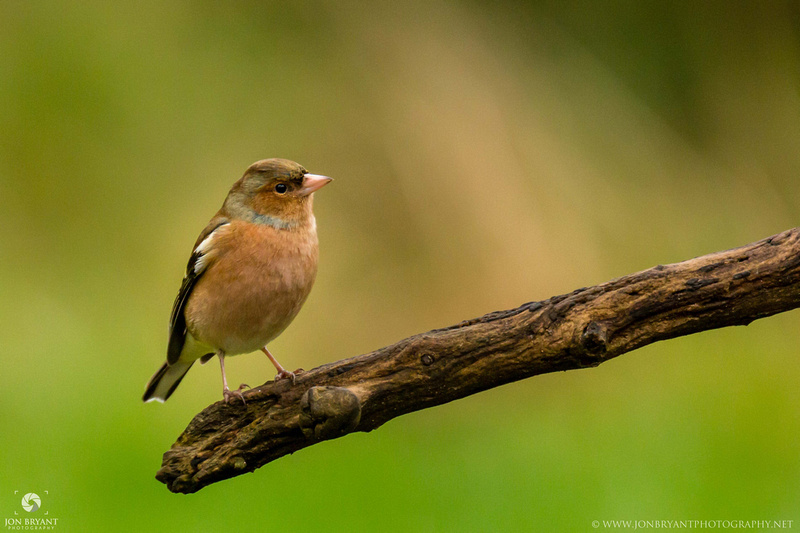 It was a pleasure to see birds that I was very familiar with from my home in the UK, notably the Robin, Blue Tit and Jay. The Jay is one of my favourite birds, but interestingly when the Jay arrived all other birds fled. The Jay seemed to have a formidable presence amongst the other birds and even the opportunistic Chaffinch or Great Tit that flew in hoping to ground feed would do an about turn as soon as they spotted the Jay. 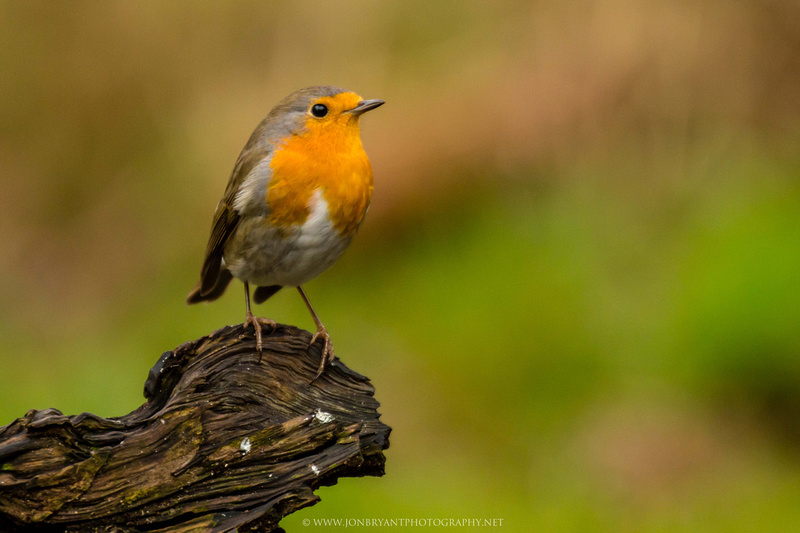 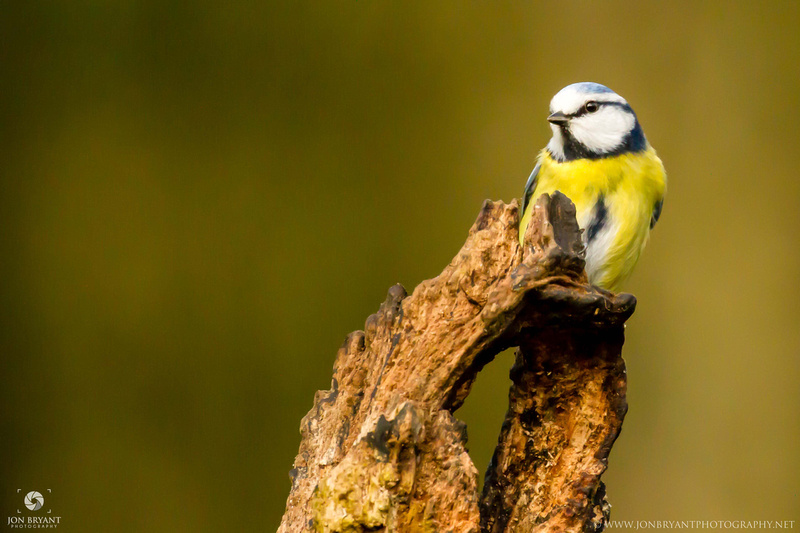 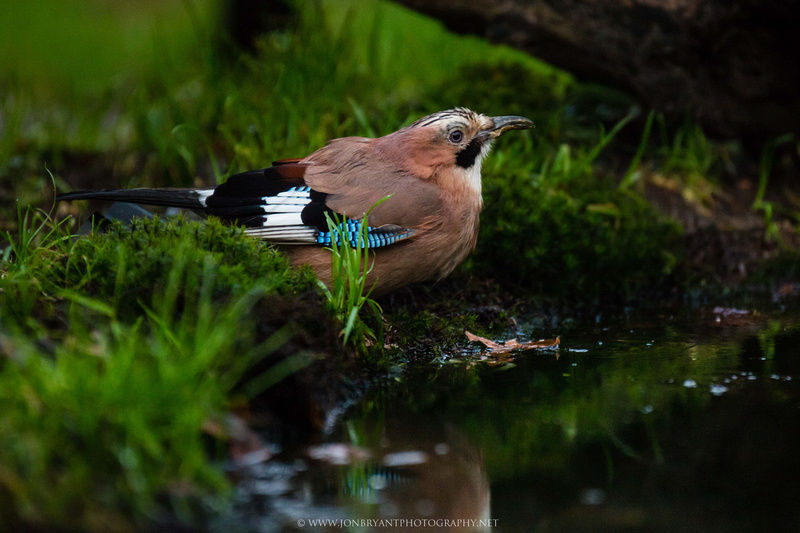 As a first foray in to bird photography goes I was very happy with the session. I stayed a total of 6 hours inside the hide and only left when I found that the turnover of birds was repeating itself and I was getting many of the same shots as I had earlier in the session. The one exception was an unusual bird who'd visited twice, moved extraordinarily fast, and I managed to get a shot of just as I was packing my gear up. It was the last shot of the day. I had to identify the bird with my guide when I returned home but found it was called a Tree Creeper. 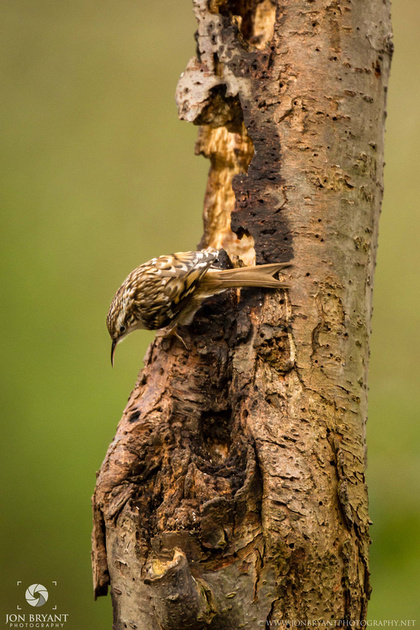 As a result of my first experience with bird hide photography, I've now made successive bookings for some of the other hides in May, June and July. I may even make a return to the same hide in April to try and work in better spring day light and see if I can get that elusive Brambling on a perch shot. I think it will help me continue to hone my camera skills in between trips when I am shooting larger animals in Africa or elsewhere. I have a theory that if I can get good at shooting birds, it can only make me a better wildlife photographer. Only time will tell if my theory holds.