2016 has seen me focus significantly on bird photography. There have been a number of reasons for this. After spending nearly 3 years building a portfolio of images focused on African wildlife, I need to focus on things closer to home. The most accessible route to go was birds. I also strongly believe that bird photography is probably one of the most challenging sub genres of wildlife photography. The subjects are small, fast moving, and difficult to approach without disturbing them. You need a longer focal length than normal because most birds tend to be quiet small. Above all else you need patience, skill and luck.

Within my roll as Panasonic Lumix Ambassador I've been working a lot this year with the 100-400mm f4.5-6.3 lens. This lens has really been a game changer for wildlife photography. With the micro four thirds sensor this lens has a 35mm equivalent of 200-800mm. This scale of focal range is ideal for bird photography and so after becoming a Lumix Ambassador it was really a no brainer for me that I would focus in this area and put the lens to full use.

July and August have been very busy months for me with lots of shooting projects both in the landscape and wildlife domains. This has been great and I've loved getting out in the field more often and regularly. This has seen my content creation be a little tardy as a result. But better late than never...today's blog/vlog goes back to a day I spent at Le Teich Bird Reserve close to the Basin d'Archachon in the South West of France. 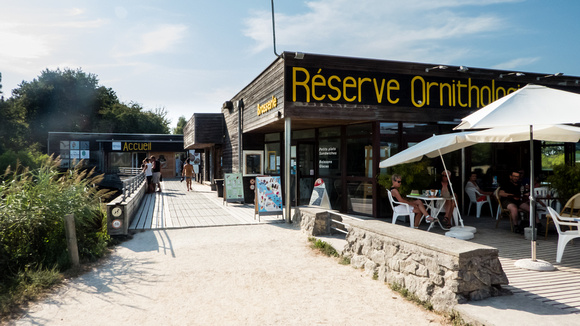 The entrance to the reserve, complete with cafe/restaurant for refreshments.

The reserve is based on a pathway that loops round a series of ponds and lakes. Some larger than others. The route is around 7kms in total and there are a total of 20 observation cabins around this route. More detailed information in English and French can be found in this fact sheet here. The day I went it was clear blue skies and sunshine and in the middle of a heat wave with 35C temperatures. The reserve has information on their website which recommends the best hours to visit the park on every day that the park is open. The day of my visit they recommended visiting in the late afternoon. However I arrived at 1pm because I knew that with a 7km route and stopping to take images along the way I would end up taking a lot more time. Indeed that is exactly what happened as I took around 6 hours to complete the full loop and stop at each of the 20 cabins. 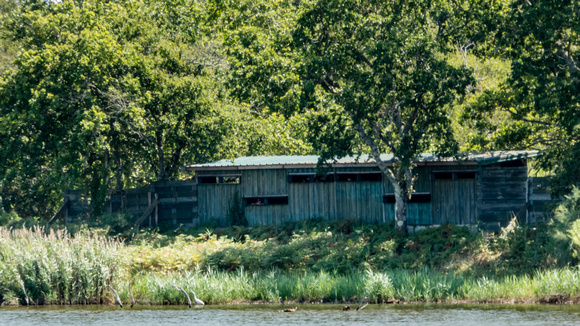 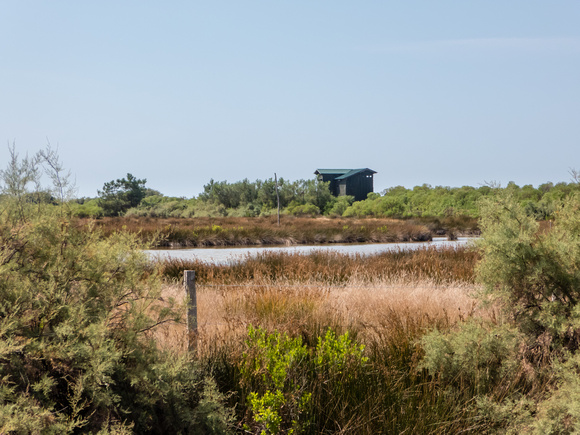 The observation cabin that overlooks the Basin d'Archachon, it has a more elevated position than the other cabins. 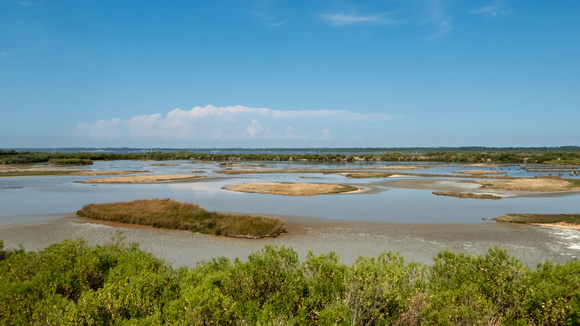 The view from the elevated cabin showing the habitat available. 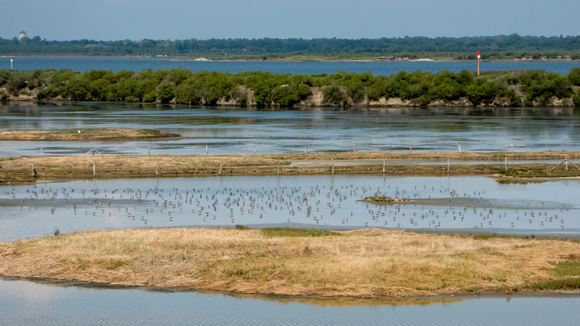 Zooming in from the observation cabin shows the number of waders within the reserve.

The geographical location of the reserve means it is a stepping stone for migratory birds between Europe and Africa. However mid August isn't a migratory season, so I wasn't expecting a huge amount of diversity. However, as I ventured deeper into the reserve I started to uncover some new species I'd not seen or photographed before. And amusingly these species were located at the cabin that had the most photographers present of all the cabins in the reserve.

I was highly impressed with infrastructure. The cabins were well thought out, the positions were excellent. Each cabin had both low and high window openings allowing for different photography angles. Benches were also available at both levels and a bench top to place your equipment. The cabins were a sanctuary against the heat of the day. I really appreciated how close the cabins were to the waters edge too. Having been to Zwin on the Flemish coast which is my nearest Bird reserve I was frustrated at how far the observation points were to the waterside. It made photography practically impossible and you clearly could only observe with binoculars or a digiscope. That's not the case at Le Teich. In the first few cabins they had also included poles in the water which allow the birds to perch. Not only did this attract the birds but it create some great interest compositionally.

A rough panoramic to show the number of birds on the perches.

I documented my visit on video which can be watched via my You Tube channel. This will give a much better sense of what it is like to spend a day at a bird park like this one and what type of images you can expect to add to your portfolio.

Whilst bird parks aren't as controllable for the subjects environment as private bird hides, they do provide a great playground if you want to increase your portfolio, photography birds you might otherwise not see in other environments and focus on capture birds-in-their-environment type images.