I ended 2015 with a blog which reviewed my year. It was good to look back and reflect on the photographic accomplishments and experiences from the year. Over the holiday period, like many, I spent the time with family and friends. This year we were in France on the Normandy coast. One of my reflections from 2015 was how I'd wanted to shoot more landscapes, but didn't really manage to. I think this was in the back of my mind on my arrival in Normandy.

I had about a 2 week period off and did very little. After a very hectic year with travel, the end of the year is a period where I prefer to put things on hold and recharge my batteries. However, I do take a small camera bag with me for recording family events and alike, and so the temptation to go out and photograph is always there. We have had an unprecedentedly warm winter in northern Europe this year. Most of December has averaged between 10 to 15C. So the temptation to go out with the camera was there...and with the northern Normandy coast on my doorstep, one morning I succumbed! 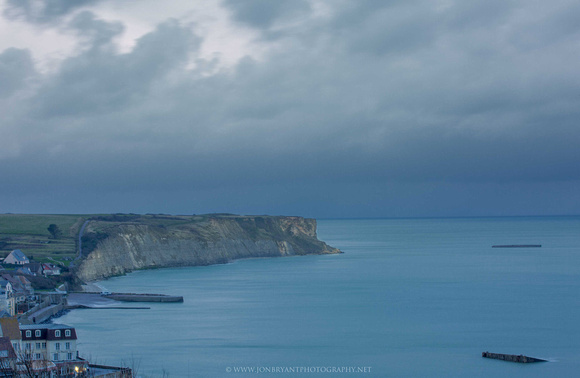 The view from the cliffs overlooking Arromanches-les-bains, Normandy.

I got up at 7.30am and drove down to Arromanches-les-bains on the coast. This is a small coastal town with a lot of history due to it's strategic position in the second world war and the construction of the Mulberry Harbour, an artificial harbour used to support the Allies ground offensive in Normandy. Parts of the harbour remain today, and can be seen and even visited at extreme low tides. Arromanches is also the location where the Normandy cliffs more or less start. Further to the east the coast is relatively flat with sand dunes and open expanses of beaches, but from Arromanches onwards further west, the cliffs are dramatic. When I arrived at the 360 degree viewing point there was a howling wind. One which toppled my tripod as soon as I placed it in position. It was dark, and even though the sun had risen the light was not yet fully up. I took just two shots, one which is a panorama stitch and the other which is the image above, slightly zoomed in on the cliffs. I actually like this image better. Those blocks in the sea are the remains of the harbour. Looking at the sea wall, I decided to head there and see what I might find.

By the time I'd driven into the town and parked the sun was up and the light had completely changed. There was a small wave coming in on the harbour wall and so I used a ND grad filter and a slow shutter speed to take this coastal image. 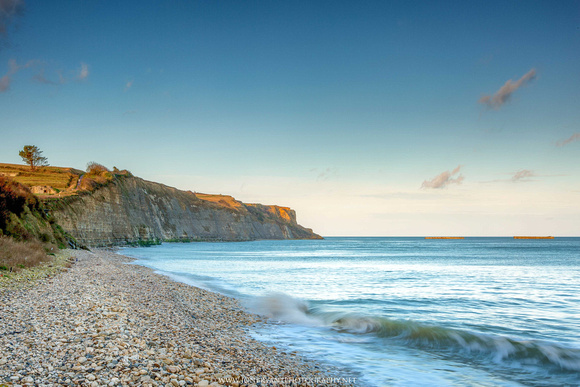 Look at the horizon of this image to the right and again you will see some of the old harbour blocks sitting out at sea. The light was now golden, the wind had removed the cloud cover and the scene looked like it was summer and not mid December.

Before leaving I hesitated over one final composition. A small jetty was being washed over by a hide tide wave. I had to walk past it to get the coastal shot above, or should I say, run past it, at the risk of getting wet. I was hesitant because I knew I wanted to show the shutter speed down to capture the movement of the wave and would have to put the camera in the impact zone of the wave. I put a vari-ND filter on the lens, which allows me to reduce the amount of light entering the lens, and still slow the shutter speed. I had 3 or 4 attempts each time having to grab the tripod and bail before the wave flooded over my position. Here is the end result... 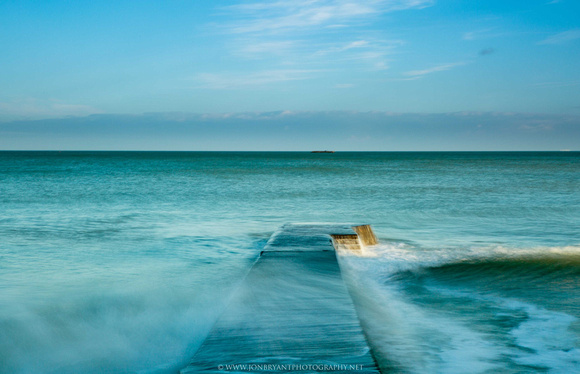 The jetty at Arromanches-les-bains using a slow shutter speed.

Whilst I like the motion projected in the wave, the end result doesn't really work for me. I should have changed the orientation of the camera to portrait and created a better lead in line with the jetty. I should have also used a slightly wider angle, here I was at 70mm due to keeping my distance. I should have tried to have got closer and gone for a 35-50mm range. Alas, I had no wellies with me, and my ball head isn't ideal for holding portrait positions. I also think that if you have a doubt in your mind how to execute an image you just won't execute that image. Here my focus was not to get wet, and hope to get the image. If I'd been in a position to focus on getting the image without the worry of getting wet, then I would have got the image. A lesson in landscape photography for sure! Build the composition in your mind and execute on it, don't hesitate. It would seem then for 2016 I've identified two areas for improvement! A new ball head and a pair of wellington boots!

Anyway, I think 2 out of 3 isn't a bad hit rate for landscapes, especially when you are really out there just for the fun of it. I realised something that I already knew...if I'm going to increase the number of landscape images in 2016, I will need to plan carefully and dedicate much more time to it. It isn't a genre that is going to provide you multiple images in a session. It's a genre that requires a huge amount of dedication, planning and effort. It's going to be interesting to try and make it happen in 2016!

So wherever you are, I hope you had a restful and peaceful end of 2015 and wish you all the very best for 2016!