What do you expect from a safari?

I've blogged about this before. No apologies about blogging on the same topic again. Why?

Well because having been to Africa a number of times on Safari it keeps hitting me that people don't realise what a safari is about. I see people coming in with incredible expectations of what they want to see and my heart drops for them because I know from experience that the chances are they won't see what they want to see. Why do I say this?

Because as I've blogged about before going on Safari is about:

On the last part of the Essential Amboseli and Tsuavo West Photosafari, we spent two nights in Tsuavo West. Tsuavo was a revelation. A place with a feeling of pure wilderness. I will blog more about Tsuavo later as I can't do it justice here. The temptation at Tsuavo was to wish for seeing a big cat or a rhino. However there was such diversity in the small things, I had incredible fun getting stunning images of dim dik, jackals, bustards and grouse. Lots of fun, I promise you.

On our very last morning drive it was grey and overcast and we hadn't seen much. I wasn't complaining, I'd had incredible sightings, and every now and again you know you'll get the odd "hangover drive" - its to be expected and its these moments you creativity should be kicking in on what other photographic opportunities present themselves.

As we drove we spotted some lesser kudu on a hill side. We slowed and stopped and I started to observe and compose my lens. They were far away but as I had only discovered lesser kudu in Tsuavo I was keen to get at least a couple of shots of them. Then Tim, our guide said "Jon, if you sit down, I'll show you something special". He reversed 200 meters. This is what we saw:

What do you see?

Can you see anything special?

The first tree line you can see before the start of the hill side is approximately 300 meters away and this image is taken at the widest focal length I had which was 240mm.

Andrew our photo guide in the other vehicle had spotted something. Let me show you when I zoomed in to 600mm: 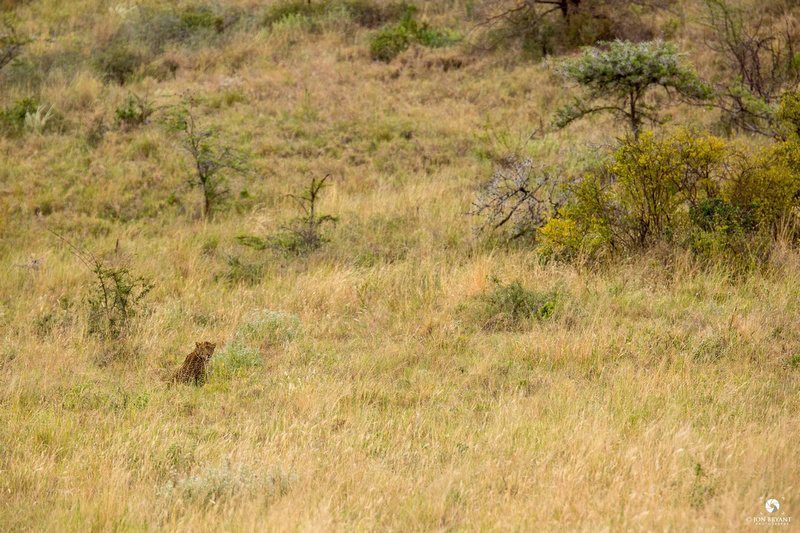 Yep. A leopard. Now zoomed in at 600mm you can see him. What was he doing there? 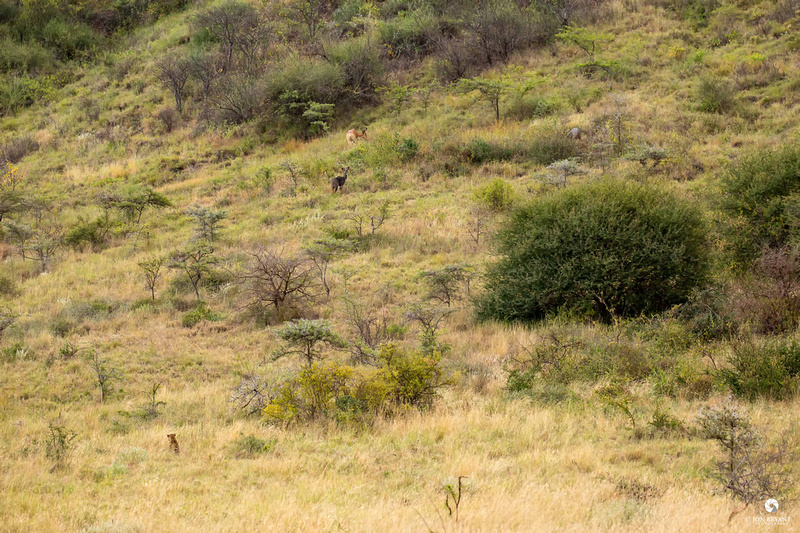 Well he was watching the lesser kudu on the hill side (there are two) and one heartbeast.

Despite the distance, this was great to see and capped off an incredible two nights in Tsuavo. Did I mind he was so far away? Not at all. I have been so privileged to photograph leopards close up in Sabi Sands. At that moment in time I didn't need more leopard portraits. For me this was completely different. This was a leopard who was probably not habituated to vehicles, sitting watching his potential prey. This was a big cat in its environment. The bigger picture and the story of this sighting was stepping back and showing the environment and not zooming in up close, which in wildlife photography seems to be the biggest trap. This was also about not just having one but three skilled guides between two vehicles who have their eyes and ears tuned in to the bush. Kudos to Andrew for spotting this! In fact the photo he showed me of the first spot, was a tiny white spec in long grass...that white spec was the leopards ear. I never would have got that.

So what do you expect from a Safari?

For me when things like this unravel, I feel grateful I'm there to witness them.