It's been a few weeks now since my return from Amboseli, Kenya.

So as a destination what should you expect from Amboseli?

Kenya is pretty much the #1 destination in East Africa for wildlife photography. It has an abundance of national parks, combined with the great wildebeest migration in the Masi Mara, which is pretty much unrivalled as a wildlife spectacle.

Amboseli is a fairly unique destination. It is situated in the South of Kenya right on the Tanzanian boarder, and has the iconic Mount Kilimanjaro within its midst. From a wildlife perspective, those of you who may be aware of Amboseli as a wildlife reserve probably know that it is associated with Elephants. Go ahead and Google: Wildlife in Amboseli, and you'll be presented with Elephants with Kilimanjaro as a back drop. 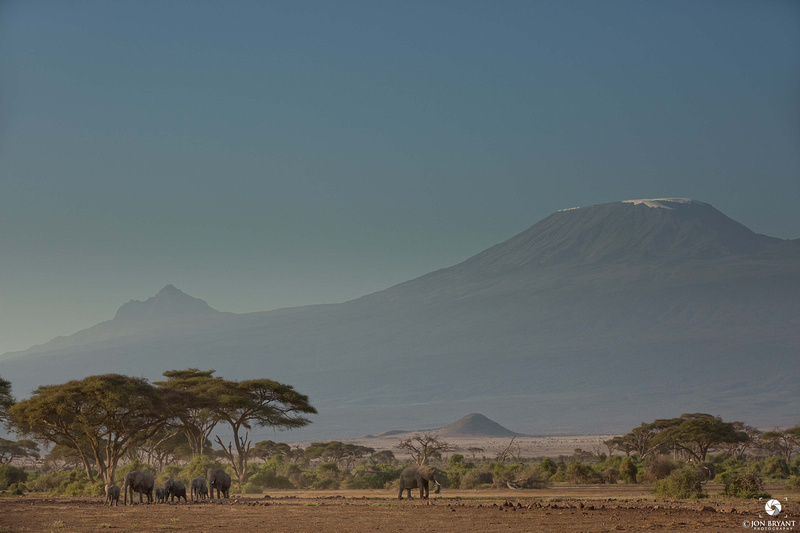 We were super lucky to have Kilimanjaro show itself, cloud free on 3 occasions. On this morning, the ellies lined up nicely for us.

But Amboseli is so much more than just elephants. And if you plan on visiting there, you need to keep your mind as open as possible to see the real beauty and diversity of Amboseli.

As you drive into the park past the gate house, you are presented with open dust plains. Overall Amboseli is very flat. But the landscape changes dramatically, from open dust plains or the dry lake bed, you are presented with woodlands, long grasslands, and open marsh areas. It is varied and diverse. The marshes that sweep through the landscape come from the water sources of Mount Kilimanjaro. This is a complex ecosystem that sustains so much of the life. You would not know the marshes were there from ground level, and you certainly wouldn't realise how deep the water is until you see a half submerged elephant grazing in one! 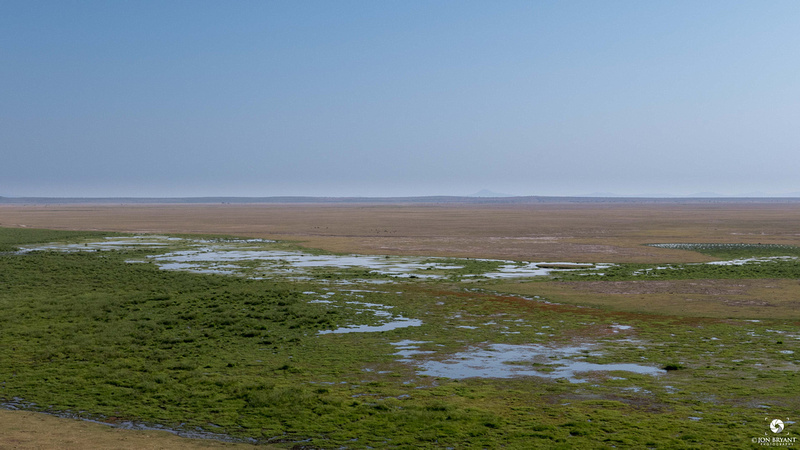 A hike up observation hill, and you see just how lush and fertile the marshes are. At ground level it can be deceiving as to how much water is actually present.

And so the marshes sustain a huge population of wildlife, elephants, buffalos, hippos, a plethora of birds and so on, in tandem with open plains game such as wildebeest, zebra, antelope (thompson's gazelles, oryx), giraffe's. The abundance and diversity can be overlooked so easily on first impressions. I'd class myself as a fairly seasons safari goer, yet there were many new sightings for me; Thompson gazelles I had never seen before, Oryx I had only seen images of and it was a dream of mine to photograph them, I'd never seen crowned cranes in the wild before, only in captivity, yet Amboseli was full of them! I had never seen Secretary birds and this was another new sighting for me. The list went on.

Being there for 4 nights, with longer than average game drives really made me appreciate the diversity of the wildlife. Those elephants you are looking at, grazing in the marshes....did you spot the serval hunting right under your nose? We didn't just see one serval, we spotted a second at a different sighting. An incredible experience as this was a cat I always wanted to see but never expected to see one in Amboseli. The serval had an abidance of prey in those marshes so over the course of those 5 days we spotted him a few times as we knew where his playground was. 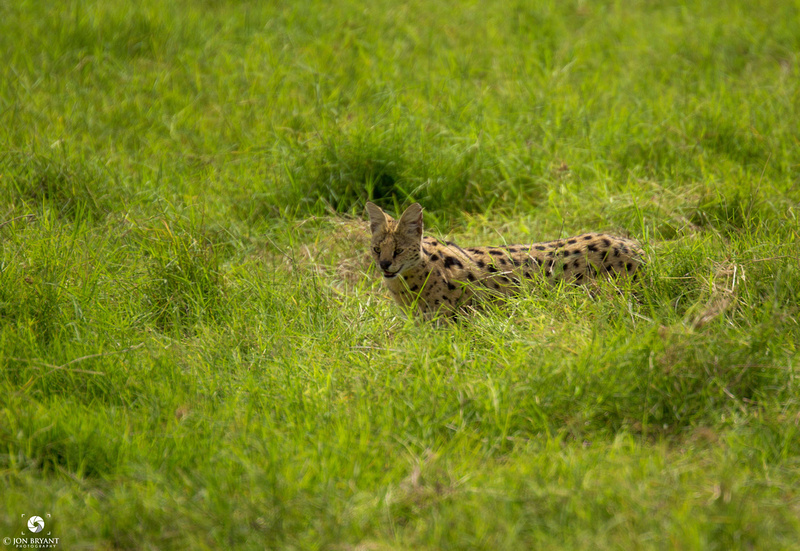 One of the many highlights for me; seeing a Serval. One of the cats on my "list to see" - they are not easy to find and it was a joy to watch him hunt.

Amboseli is such a huge place, you have to be prepared from a photographic perspective to get in tune with the landscape very quickly. In Kenya, game drive vehicles must stick to the road/tracks. No off roading is allowed. Therefore the sighting you encounter may be many meters away from your vehicle. This should not put you off at all. This is probably one of the top 3 reasons I wanted to go to Amboseli. I had limited experience shooting with long focal lengths and this was an opportunity for me to learn something new. 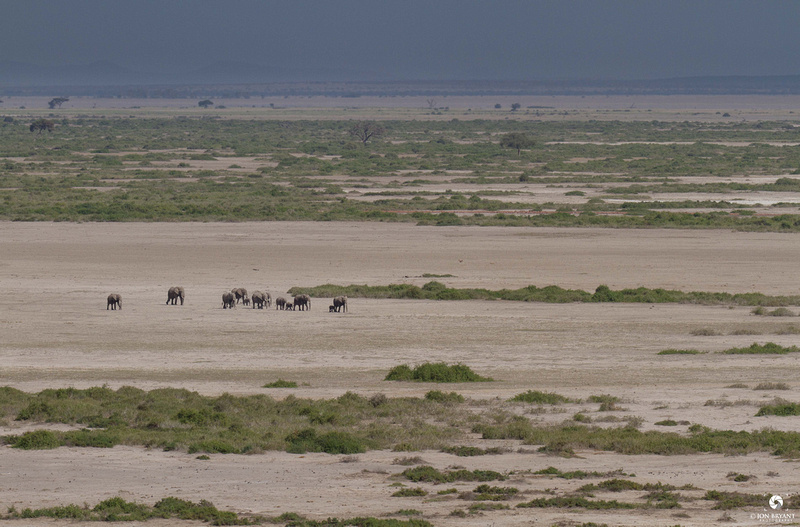 This photograph shows the scale of Amboseli, and why it is probably one of the best destinations to learn how to shoot wildlife at longer focal lengths. 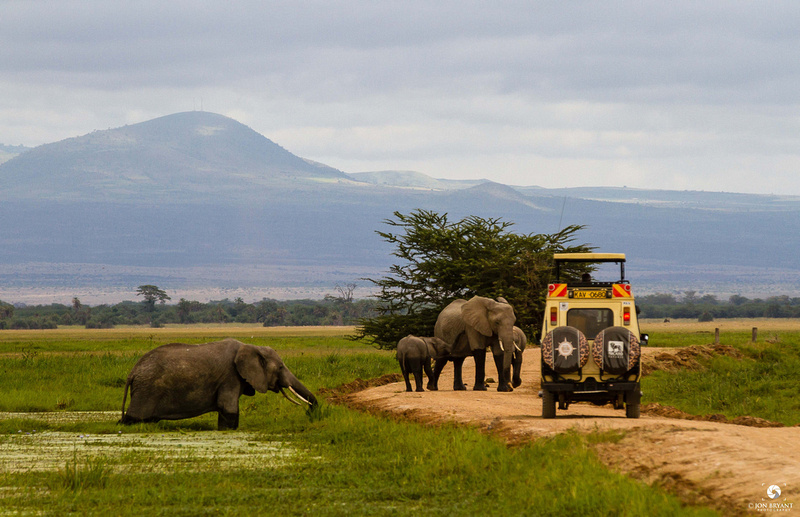 An Amboseli roadblock. If you are familiar encountering Elephants in South Africa, you just drive around them. In Amboseli even if you aren't surrounded by marshes, you can't off road, so you have to be patient or reverse. Either way, I'm not complaining. More time to photograph!

In Amboseli I was working between 300-600mm for the majority of the time. For me that was a great learning opportunity. Being presented with subjects far away forces you to work around those constraints and gets you thinking creatively and as a result increases your technical ability with a camera. But if you visit Amboseli for wildlife photography you will need a kit bag along these lines:

Here's the metadata from Lightroom for both Amboseli and Tsuavo West photos combined:

You can see, well over half of my shots were within 240-600mm focal length because I was using a 120-300mm lens with a 2X converter. Things to be aware of when using a 2X converter are that it will vignette. This can be fixed in Lightroom and Photoshop, but just be aware especially if you get really tight in on a subject. It is often better to just pull back a little and give yourself some space around the edges of the frame. With that in mind, another aspect of shooting with longer focal lengths was in shooting for the crop. This is another area where again you need to think carefully about the composition in order to give yourself enough space and leeway to crop in Lightroom. You also need to make sure your focus is spot on if you are shooting to crop. I wouldn't recommend shooting for cropping as a default, but it is important to know how to do it when your focal length limits you. Its a good trick to get you out of jail occasionally, but shouldn't be relied upon.

So this was really the challenge; a huge landscape and the need to work with longer focal lengths, yet be able to tell wildlife stories of animals in their environment. Amboseli without doubt is an incredible "playground" for the wildlife photographer. Let me show you some examples below, and comment on each instance... 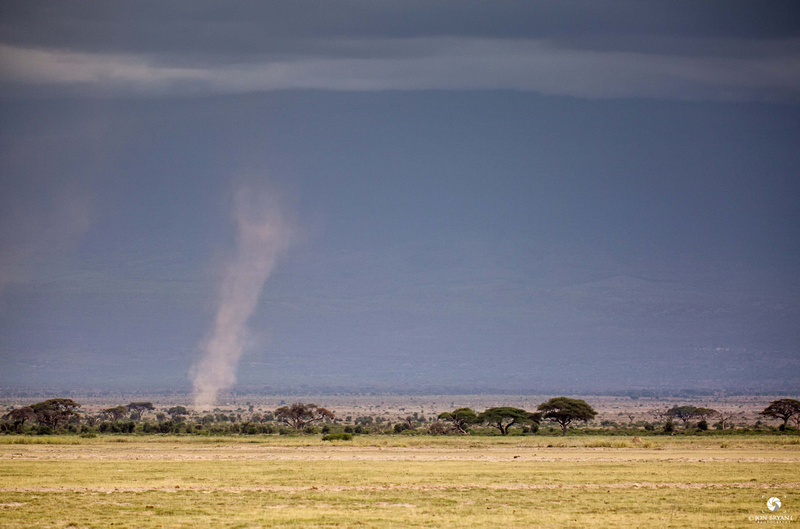 This photograph shows the classic Amboseli colours. With Kilimanjaro as the backdrop, you have a "tricolour" of battle grey/blue, pastel yellow and green. This gives wildlife photography in Amboseli a unique angle. Any animal you find with the mountain as a backdrop gives you a unique and colourful backdrop in your compositions. Sometimes, as shown above you'd have these 'dust devils' swirling about. They are quite common and again give a lot of interest to the images. 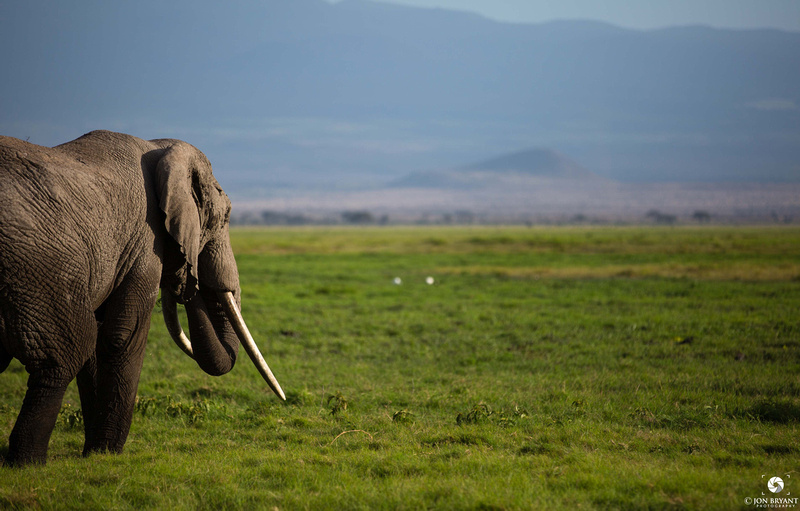 The image here is of an elephant, but I wanted to play with multiple aspects in the composition; the light, which as you can see is incredible (more on that later in the blog), that battle grey/blue backdrop, and the open expansiveness of green grazing grass that the elements eat. Compositionally I decided to break the rule of thirds and put the elephant to the far left, and fill a lot of the frame with negative space. This was on purpose as I wanted to show the elephants grazing environment as this is so important to the story. I then had to wait for the trunk to roll up to emphasise the feeding! The two little white specs are egrets, which follow the elephants around and piggy back on them. 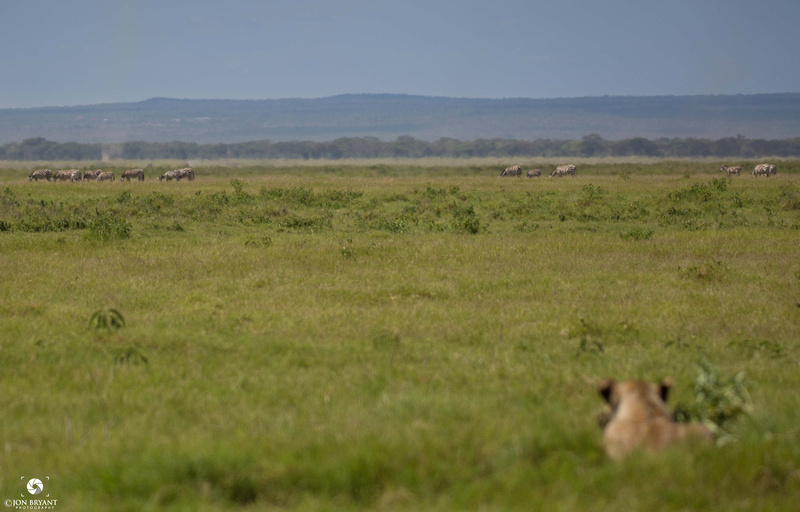 So you are expecting elephants in Amboseli, right? Well how about lions? We came across 3 female lions pretty much flat cat, in the midday sun. Eventually they sat up and started to take notice of some grazing zebra on the horizon (and eventually two reedbucks a little closer in the longer bushes centre). We were some meters from the lionesses, so here I decided to compose and use a shallow depth of field to tell the story. The lioness focus was on the zebra, so that's where I put the camera focus, on the landscape and the environment, with the lion being blurred in the foreground. Compositionally this works for me, and is a great example of how to work with your surroundings and a longer focal length. 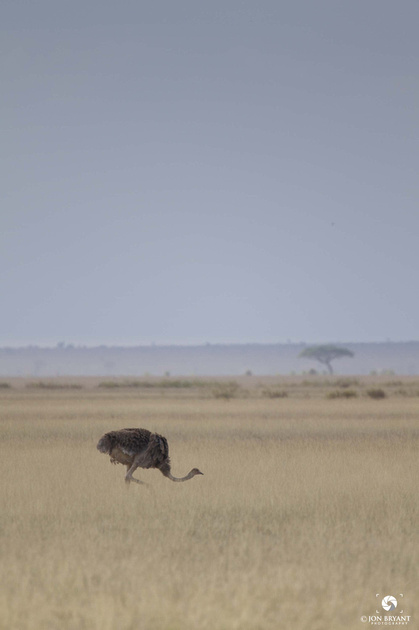 "Hold on. The last photo you shared was lush and green. Now you are posting a photo with straw coloured soft yellow grass. Surely you've switched game reserves?"

No, this is still Amboseli. Look at those colours. An Ostrich far away from me. I'm zoomed in at 600mm. I've got a tree as a distant anchor point for some contact and I'm just watching the Ostrich until I get a nice posture to represent his grazing. With an "S" neck and one leg bent, I clicked. I overexposed to emphasise those pastel colours. I never imaged getting so excited about shooting Ostriches. But once I took this image, I kept shooting them whenever I could!!! 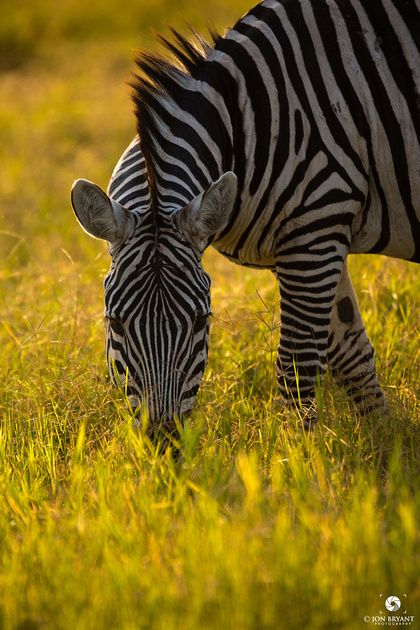 A simple portrait. But the light makes all the difference. Back lit, this sings to me. Enough said. 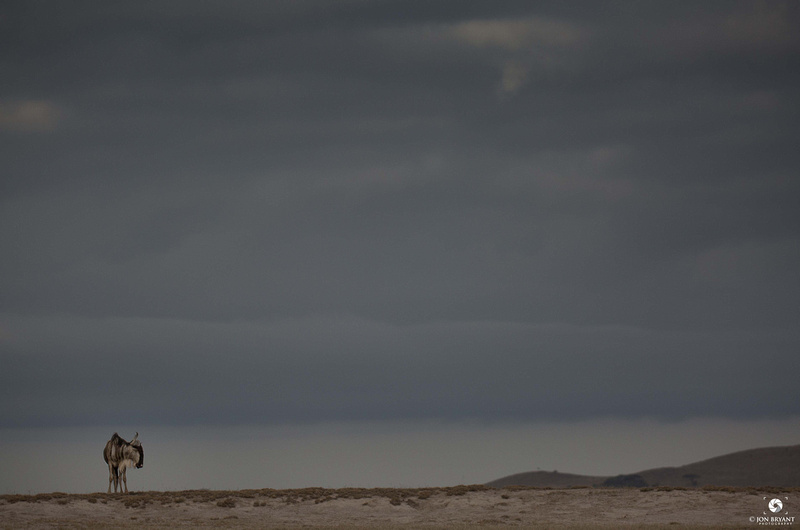 Simple clean compositions were another way to interpret the landscapes of Amboseli. We would see herds of Wildebeest and they often gave us some great photographic opportunities, either chasing each other due to rutting, or in golden sun rises. But when you saw the odd isolated Wildebeest how could you compositionally make it interesting? It was often cloudy in Amboseli, which mean variable light and colour conditions. Here I just used the contours of the landscape and negative space to show the Wildebeest in his environment. This is another photograph that shows the contrast of the Amboseli landscape. 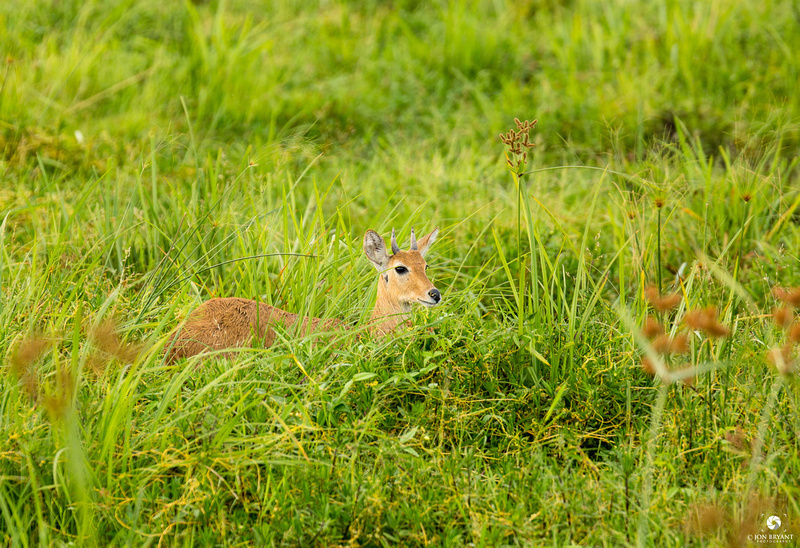 Another new species for me; a reedbuck. This one was some ways from us in the reeds of the marsh. So with a 600mm focal length slightly pulled back to around 550mm, I worked on some natural framing to create a nice portrait of this antelope in it's environment. 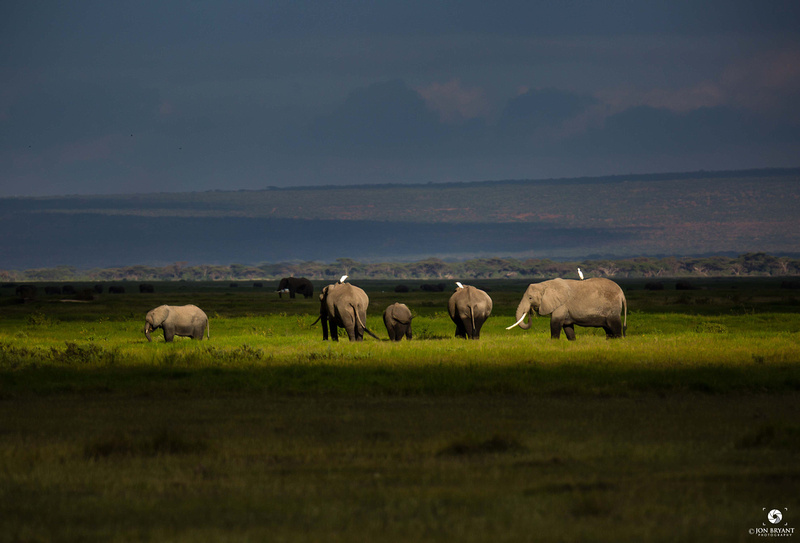 Yes you really are seeing a spot light on those elephants. Take a look at the mountain hillside behind them. That's a shadow of a cloud. The light in Amboseli is incredible. Nobody can tell you how good the light is in Amboseli. You have to experience it. This is called "key lighting". You are waiting for the clouds to move and illuminate the subjects. Here we had positioned and waited for the key lighting to appear. You don't have much time to work because the light will pass very quickly as the cloud moves. Here I was lucky enough to have some egrets piggy backing and at least two of the ellies side on and one trunk rolled. So I am happy! 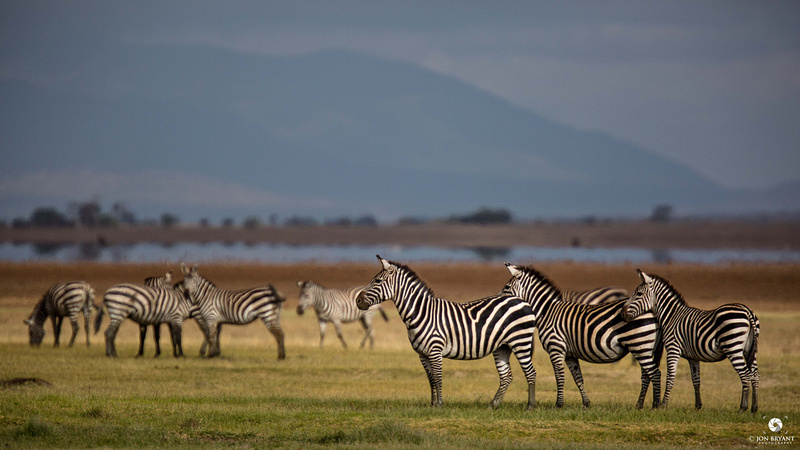 This is the final image. And for me it doesn't get much better than this. The colour mix in this image is just crazy; black and white of the zebras, the green and yellows of the grass, the red and browns of the dry lake bed, the heat haze and then the battle grey/blue of the mountain and sky. Just incredible.

So to conclude....what is Amboseli like as a destination? Well it's unique for so many reasons. I hope I've convinced you with this blog and the images that I've shared, that Amboseli is so much more than elephants and Kilimanjaro. After starting my wildlife photography adventure in South Africa, and with 4 return visits, when I chose Kenya and Amboseli it was for a reason. Like a painter looking for inspiration as they paint on a new canvas, I wanted a new photographic canvas to challenge my creativity. Amboseli delivered in abundance. GK Chesterton said "the traveller sees what he sees, the tourist sees what he has come to see". Amboseli is without doubt a destination for travellers.