This is a long overdue blog! I have been meaning to write a blog on my experience in Tsavo West for months, given it was end of June/early July I actually visited there. But as so often is the case, things snowballed on returning from Kenya and the blog got away from me. 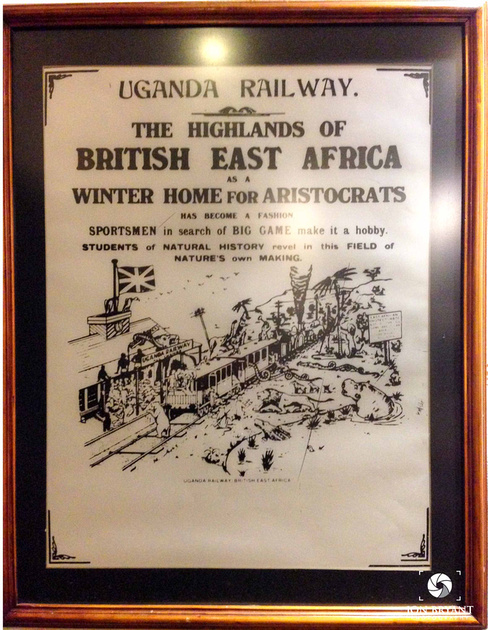 One of the frames in the lodge reception eludes to the colonial past of the reserve.

But better late than never!

I purposefully did not include a trip report for Tsavo in my blog about Amboseli, despite both destinations being part of the same guided photo safari with Wild Eye. There is a good reason for this. Tsavo West was so different in so many ways to Amboseli, I could not do it justice in the Amboseli blog. It deserves a blog of it's own. And with this blog, I am going to let the images do much of the talking. 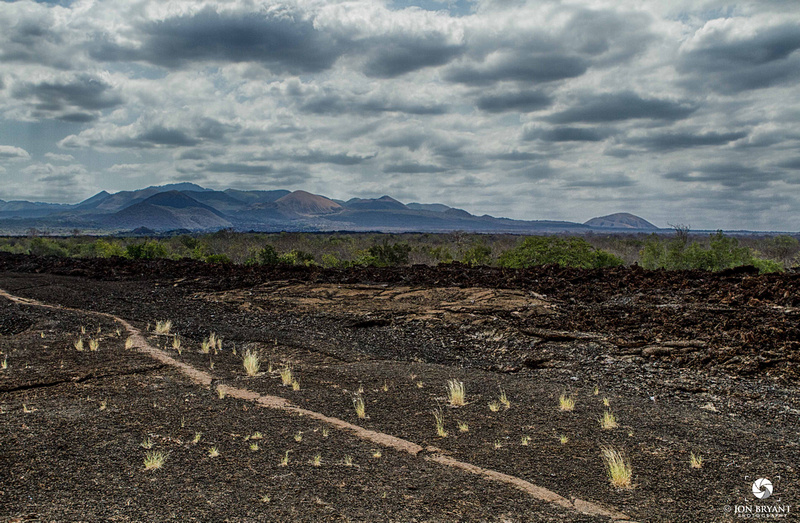 Driving into the reserve we passed a large landscape of lava rock. The transition from lava to bush was dramatic, and despite the lava being fairly barren of life, it was interesting to note some grasses taking root.

Tsavo West is about a 2 hour drive east of Amboseli, located in the south east of Kenya. Tsavo West is a national park and it is conveniently located close to the main road that links the capital Nairobi with Kenya's largest port, Mombassa. Given the amount of passing traffic between Nairobi and Mombassa, you would probably expect that the park is well frequented with guests and game drive vehicles taking advantage of it's location. This wasn't the case at all. Tsavo West was one of the most remote and wild places I've ever visited.

We were only in Tsavo for two nights. Heading out on game drive the first thing that strikes you is the landscapes. It feels like a real mixture of reserves I've visited before, somewhere between Madikwe and Sabi Sands, with some mountains like the Drakensburg thrown in for good measure. 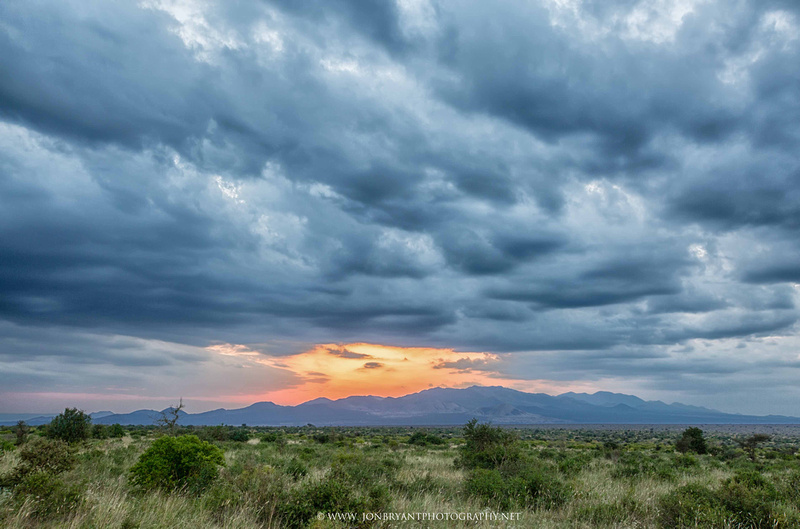 A sunset over Tsavo, with imposing clouds and stunning colours of greens and oranges with the mountains on the horizon.

The bush was a mixture of lush greens, yellows, golds and the earth a deep terracotta colour. The mixtures of colours was spectacular. After spending time in Amboseli with an abundance of elephants, I must confess that in Tsavo I was hoping for some cats and rhino. Out on drive I soon realised this was going to be a very different safari experience. Just like in Amboseli there is no off roading. There were nearly no other vehicles out on drive. In the 2-3 days we were there, I saw only two other vehicles pass us on drive. So no radios calling sightings in. This meant that for game spotting we were on our own and relying on our guides, Tim and Jimmy's skills. They came up trumps! 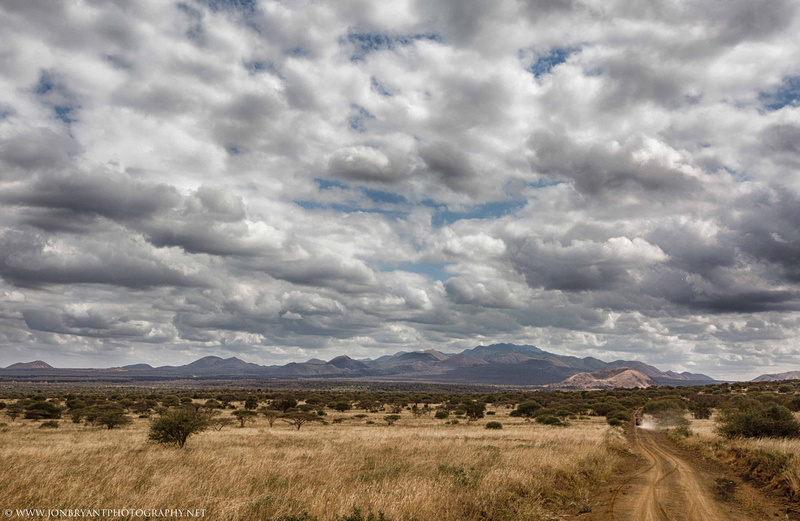 The dust in the distance - one of only two other game drive vehicles we saw during our 2-3 day stay in Tsavo.

What became obvious quite quickly was an appreciation of some of the smaller things, birds, antelope, jackals, rock hyrax (dassies). The diversity and beauty of the Tsavo landscapes provided a wild canvas in which to photograph these subjects. This was a great exercise in natural framing of subjects. Focusing beyond the foreground wilderness and shooting the subject in it's natural environment. The light was outstanding too, particular early morning. Static subjects such as Dik-Dik and Zebra's standing in the long grasses made for some beautiful and elegant portraits. 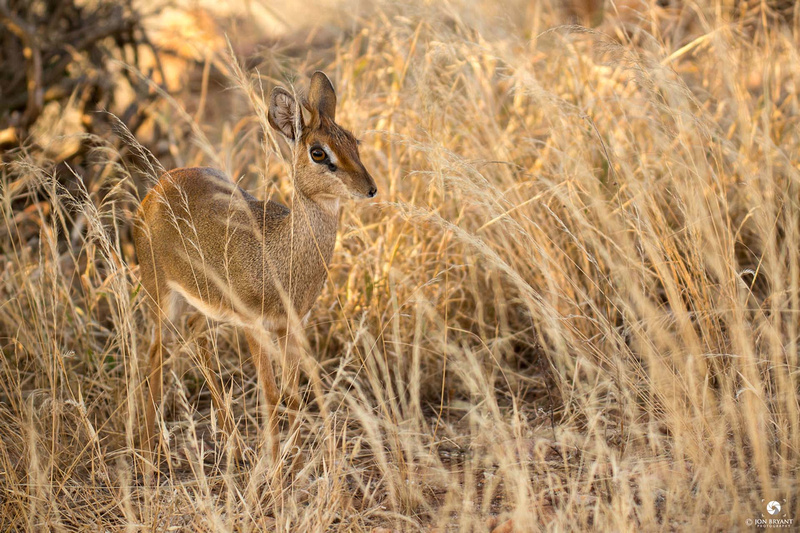 A Dik-Dik - these very skittish antelope could be spotted in and amongst the long grass, but they wouldn't hang around for long. 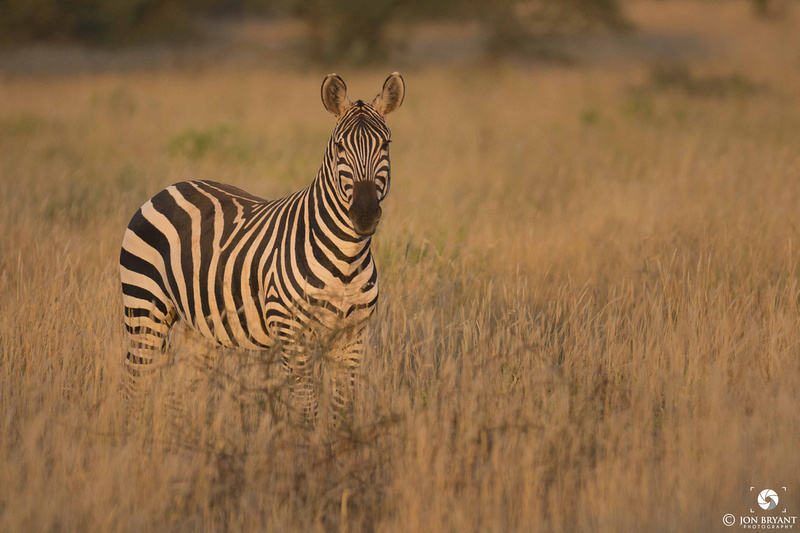 The early morning light was probably some of the best light I've ever photographed in, and made for simple clean compositions.

The cherry on the cake at Tsavo was a morning spent at Mzima Springs. This was an oasis within the park. On arrival at the springs it was clear that we were close to a water source. It felt more like rain forest than the surroundings of yellow and straw coloured grasses we had been driving through. To get to the springs we had to walk and we were guided by a local ranger. 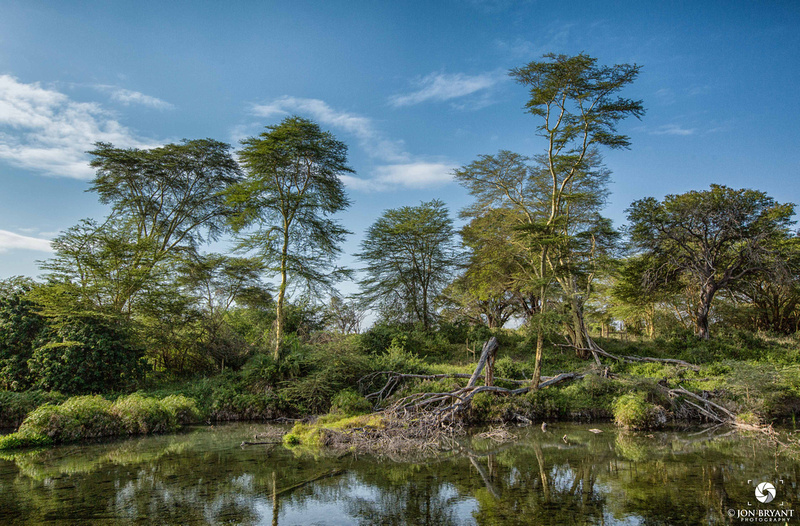 Tall fever trees surrounded the edge of the springs. A simply stunning place of natural beauty.

As we walked the foot path, the local ranger explained that there were hippos in the area and whilst during the day they are mostly submerged in the springs, sometimes they roam free and so it is important to be guided to the main observation point. Along the path we got a glimpse of what was to come. 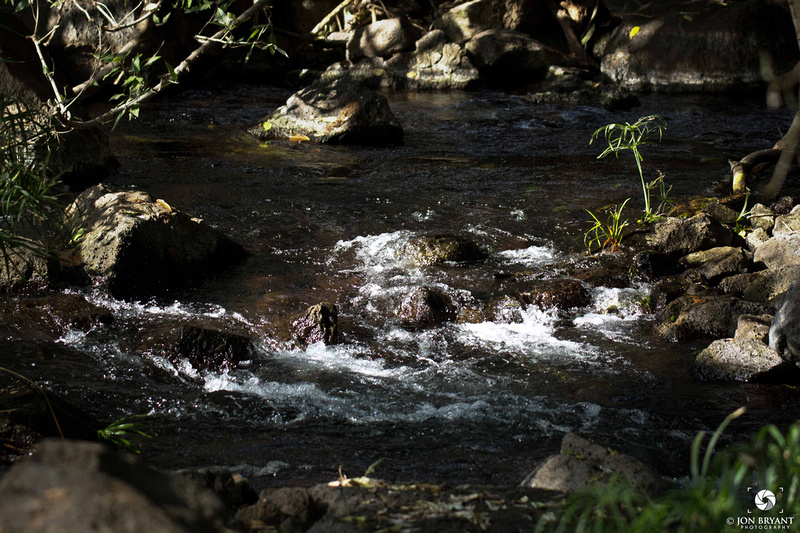 The springs consisted of two pools resident to crocodiles and hippos and connected by a series of river flows.

As we headed further along the path, surrounded by a lush green canopy of tress we finally saw the hippos the guide mentioned, thankfully all "at home" in the water. Hippos are not an animal I want to cross in any capacity! 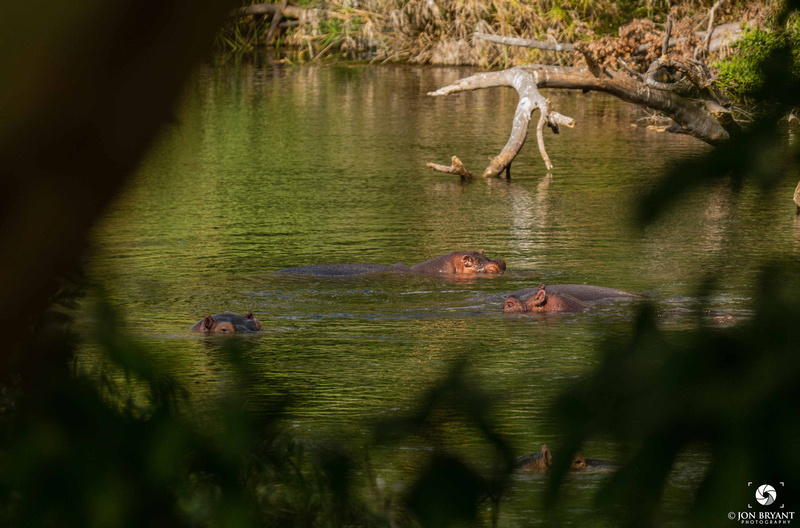 A glimpse through the trees, 4 hippos in the springs, just a few of a much lager pod as we were to discover.

But before we actually got to the main observation point, the group started to spot things. On the section of path we found ourselves on, there was an abundance of wildlife that had just blended in to the surroundings. It was hard to know where to start. We were surrounded by beautiful flowers which were attracting butterflies. At the edges of the water was a small to mid sized crocodile lying in the sun on a tree log. 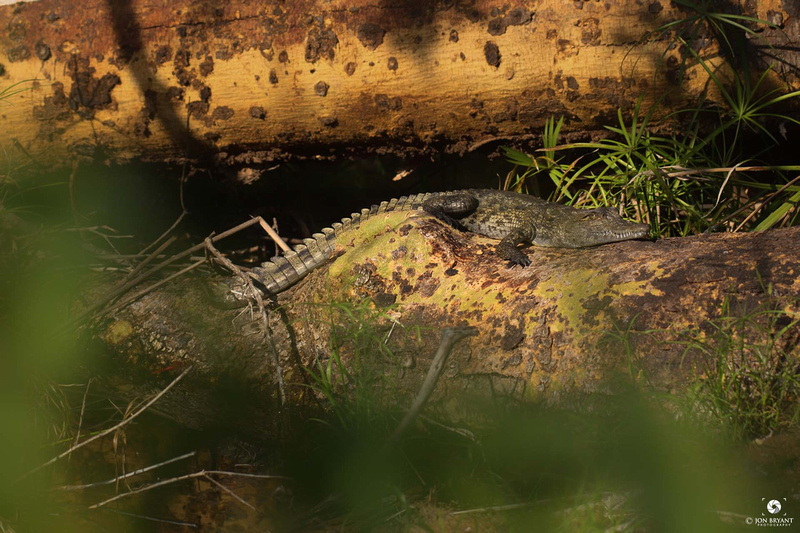 As we slowly approached the crocodile, we got a few naturally framed images. He did become aware of our presence and hoped back into the water.

And then as we finished taking shots of the crocodile, someone had spotted some bats right behind us hanging from a tree! Trying to get a good shot of them was a challenge, but it was just incredible to find such diversity, but also species you typically wouldn't experience on a typical African safari. I think this is why the experience at Tsavo was so special. 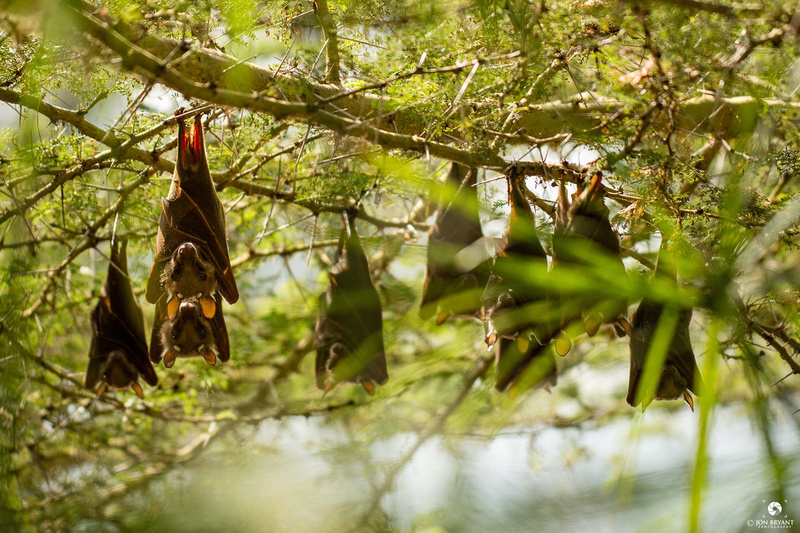 A group of bats hanging within th bush just meters from us. With some foreground foliage not an easy shot to get, but one of the more unique wildlife images I've capture on safari.

Despite hoping for cats and rhino when arriving, having all of these new subjects in such close proximity and on foot was a remarkable experience. We finally reached the observation point onto the main spring where we had breakfast. The view was truly stunning and to be able to spend a good couple of hours there uninterrupted was a real highlight for me. 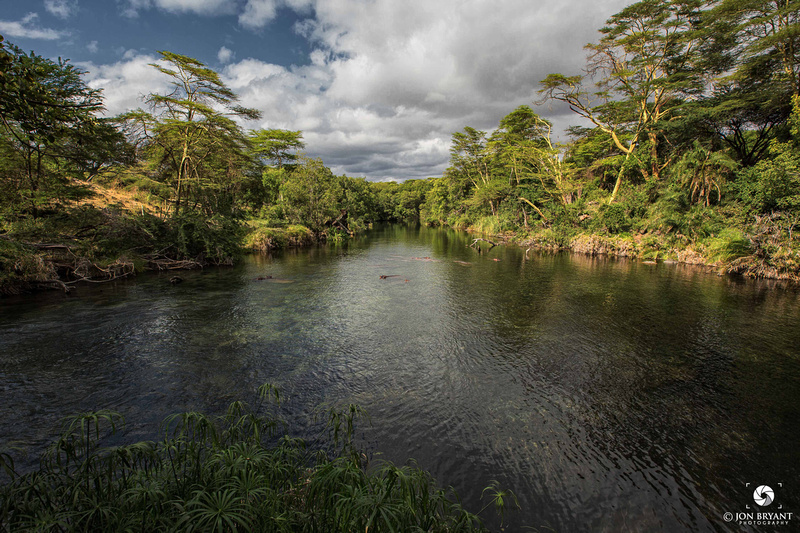 The observation point provided this stunning view of the spring with a pod of hippos, and the banks lined fever trees. 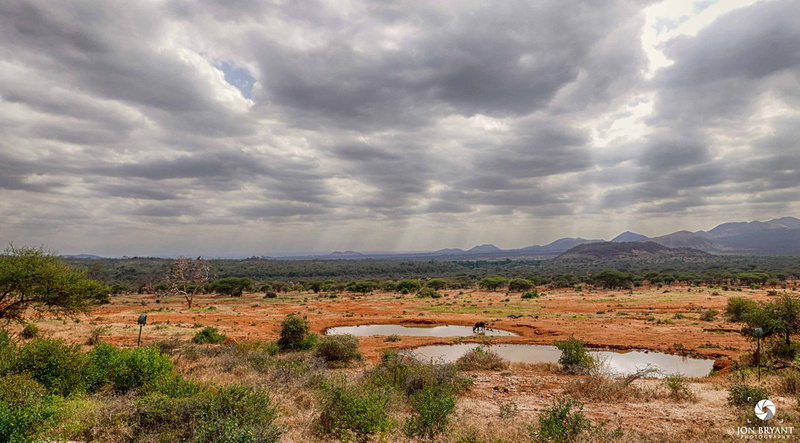 The view from the main area in the lodge - two water holes were a big draw for game.

The lodge where we stayed provided some incredible views of its own. It had two waterholes in front of the main area, where we could sit, relax and watch a variety of general game come to drink. There were plenty of Oryx, Impala's, Buffalos, Kudus, and Zebras that came to drink. With a bit of patience and timing, the Zebras played nice and gave me this image...

5 in a row. I think as wildlife photographers we often imagine taking images where the subjects line up perfectly at a waterhole!

So what about cats and rhino? Well no rhino. We saw a few elephants, but certainly nothing like the Amboseli elephants. These elephants were very wild and preferred we kept our distance. However, interestingly these elephants took on the colour of the Tsavo landscape, the terracotta colour. We also saw lots and lots of giraffe's, again with a much deeper tonality to their colours than we had seen in Tsavo. 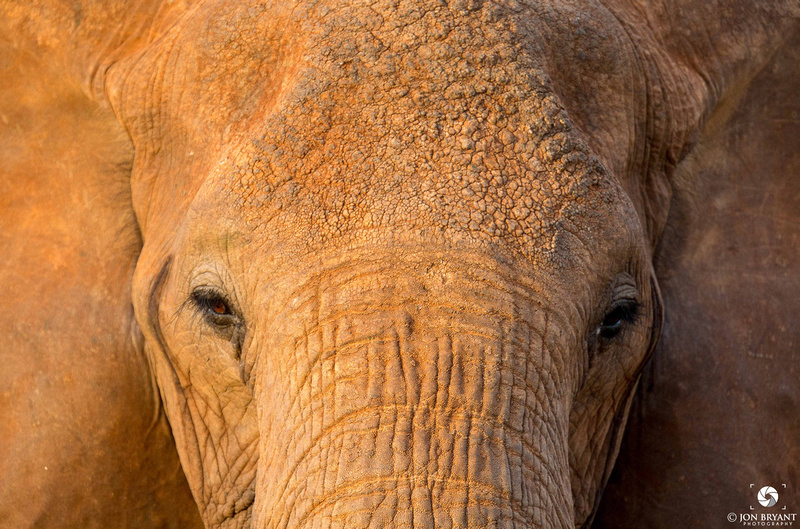 Elephants were a constant theme of the trip, the ones in Tsavo were very distinctive due to their colour matching that of the landscape.

On the last drive, Andrew and Jimmy spotted something special. Even now when I look at my images I have no clue how they spotted a leopard, hundreds of meters away in long grass. I wrote a blog about that sighting here, and I encourage you to go take a look. It's a perfect example of how difficult game spotting is, and why you need to rely on people with experience in the field to deliver such sightings.

Tsavo was a truly special place. It wasn't at all what I was expecting. As a national parks go this is a very wild place. With very few other vehicles on drive you get a sense of an untouched wilderness, even to the point where you feel that it has been abandoned (which isn't the case by the way). You wonder where the other safari goers are? You have the roads and the landscapes to yourself. The animals are skittish and not used to your presence. This provides its own photographic challenges, with long lens work and having to compose and get shots with some degree of speed when on drive. I came away from Tsavo with truly original images. I chose Kenya as a destination for a reason. I wanted to discover a new "canvas" in which to create wildlife images. Tsavo was the epitome of that analogy of a new 'canvas'. It also provided me with host of new sightings; eland, heartbeest, and lesser kudu. And that's always a good situation to be in!

Would I recommend it? Yes. If you want an untouched place that feels like going back to colonial times, and discovering the area for the very first time, this is one of those places. Uncrowded and wild, it is a very special place indeed.