When the Panasonic GH5 announced one of the headline features was "6K Photo". At the time of the announcement it was not clear how the feature would exactly work. Panasonic have pioneered the concept of "4K Photo". My fellow Lumix Ambassador Ross Grieve has been at the forefront of this innovation in photography - he has used it commercially and even won awards for images from the 4K Photo feature.

What is 4K Photo? Well you can take a short burst of video and from that video clip, you can the select an individual frame in camera which saves to an 8 Megapixel JPEG file.

Since working more with Panasonic I saw the potential of the 4K Photo feature but I hadn't fully embraced it. There was a very simple reason for this: time! I've been very focused on multiple projects and portfolio building with the Lumix GH4 and the 100-400mm f4.0-6.3 lens. My initial experiences with 4K Photo feature were not that successful, and this was purely down to me not spending more time on fine tuning the camera settings to make it work. I was also focusing in a very challenging area - trying to use it with wildlife subjects!

A couple of weeks ago, Panasonic loaned me a GH5 and the new 12-60mm f2.8-4.0 lens. I started to take it out on a number of planned landscape and wildlife shoots. During the wildlife shoots I decided to put the 6K Photo feature to the test. 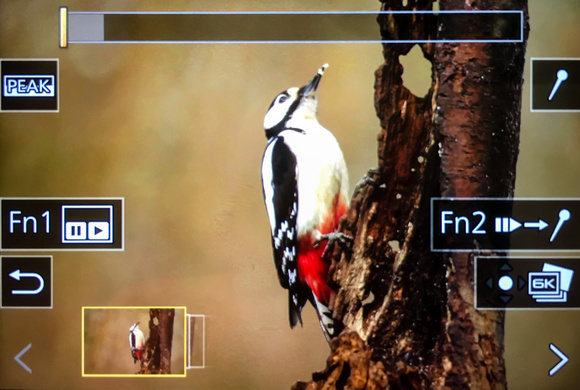 Back of the camera iPhone snap: 6K photo mode allows you to record 30 frames per second. You then access the clip via the playback function and can access and view the clip frame-by-frame. 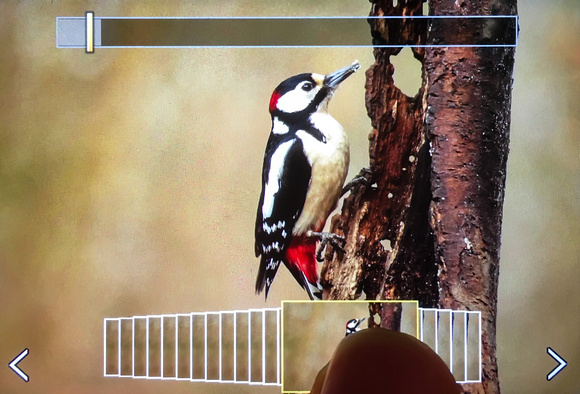 Back of the camera iPhone snap: With the touch screen function you can slide across the frames with your finger until you find the preferred frame. 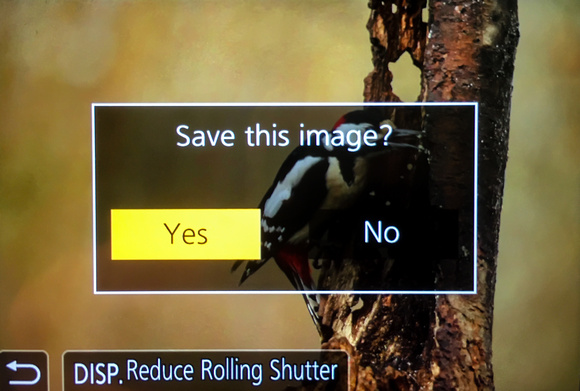 Back of the camera iPhone snap: Pressing the assigned function button allows you to save the frame as an 18Megapixel still JPEG to the SD card in camera.

The reason I am excited about this technology is because of one simple thing: I no longer need to compromise!

I have had so many examples in the field where I have had to make compromises between video and stills. There are moments when you are confronted with a sighting, one of my most memorable was a lion roaring last year in Madikwe South Africa. With anticipation, I could see what was about to unfold in front of me and I had to make a decision, did I want to capture this on video or with stills? In the end I opted for video as it is a very dynamic and moving moment to witness a lion roar. But as he did so the cold of his breath rose and I sat there gutted I couldn't capture still images of that moment.

With 6K Photo on the Panasonic GH5 I know longer have to make those compromises. It allows me the best of both worlds. And when travelling this is even more important because it means I can keep kit and weight to a minimum with just one camera which can create incredible broadcast compliant 4K video and 20 megapixel stills, with the 6K photo feature allowing me to capture every moment I want on video and extract the still in camera afterwards.

As I use this feature more and more I will probably blog about it further. For now here are my initial thoughts and some results from the field.

My first real test of 6K Photo was shooting wild foxes close to the Belgium Ardennes a couple of weeks ago. I didn't use 6K photo a lot because the approach to get in position to photograph the foxes was very challenging and required a lot of stealthy moves! Therefore I didn't want to miss my shots and shot mainly stills. But on a couple of occasions once I was in position and the fox was unaware of my presence I was able to try the 6K photo feature out. 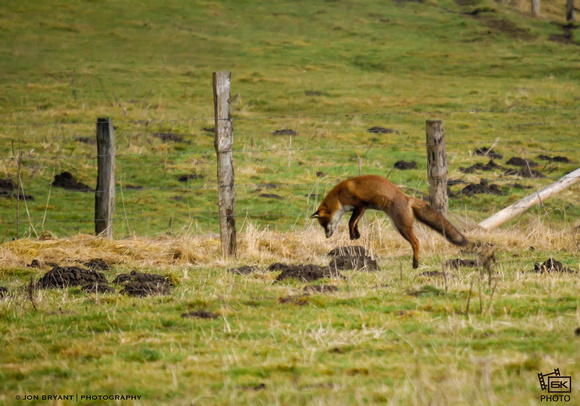 The final result is ok. There are some issues with the image, notably it isn't perfectly sharp. This is my fault and my fault alone. If you take a look at the photo below you will see why! 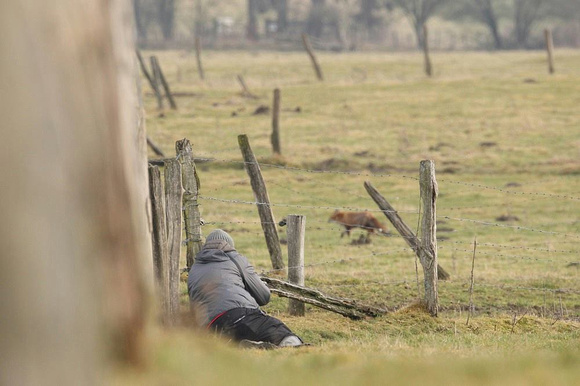 As you can see I am lying down with very little cover and I am shooting handheld. You can also see it is fairly overcast and so the light was not the best. I am convinced if I'd had a tripod, or better light for higher shutter speeds the final JPEG image would have been perfect. 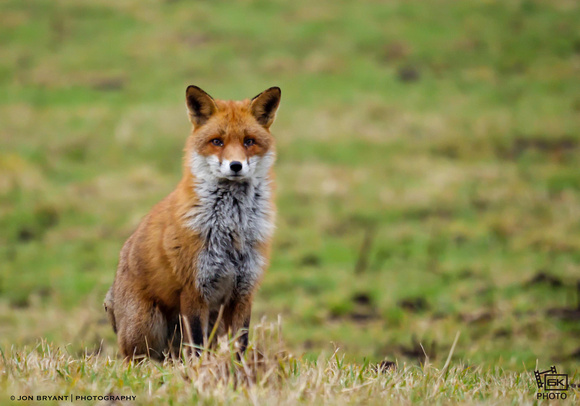 This vixen was asleep when I approached and I got within 3 meters behind a fence and with good cover. After spending some time with her, she eventually woke up and slowly became aware of my presence. At this point she was looking at returning to the den and I was between her and the den entrance. I took this 6K Photo as she was moving, before slowly retreating to allow her access and reduce any stress. This image is much better because I had a better position lying down on a fence embankment and was able to rest my camera on the ground and get some stability (see below). 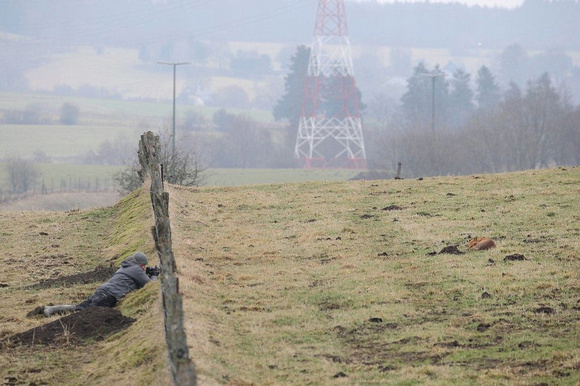 The second real test of the 6K Photo feature was in a specialist bird hide. This was a much more challenging scenario. It is still very dark at the moment as we are in winter and even when the sun is up, on an overcast day, light intensity is low. This simply means high iso's and shutter speeds slower than you would really like. For bird photography fast shutter speeds really are essential. But close to the middle of the day at peak light I was able to start experimenting with the 6K Photo feature. On this occasion I was much more happy with the results and started to get used to using it more consistently. Here are 4 examples: 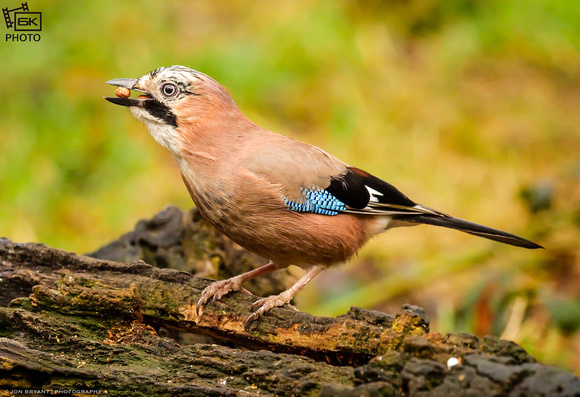 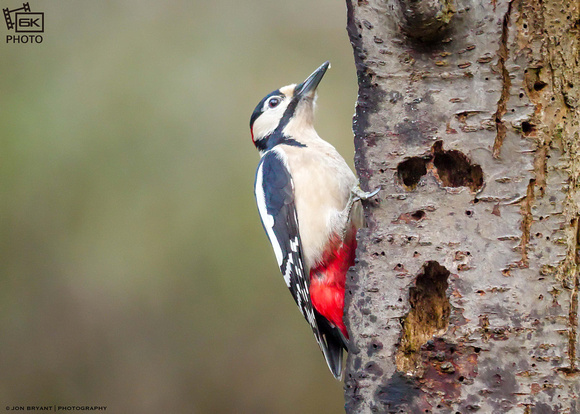 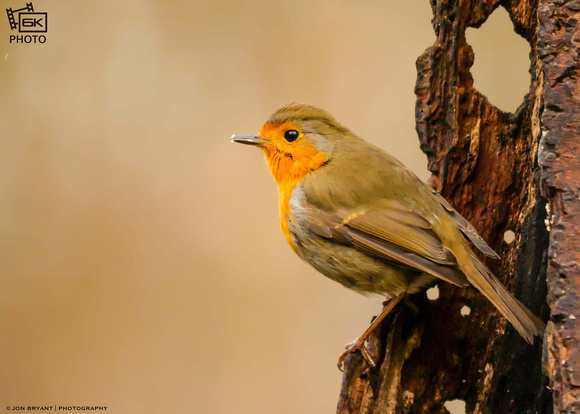 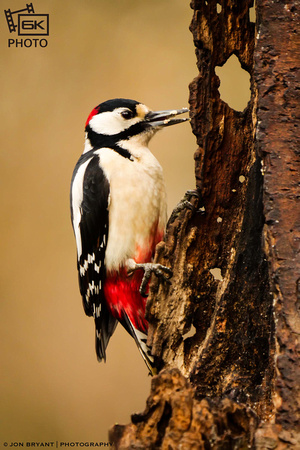 The bird images came out really well. I've been super impressed with the results. It is especially nice to be able to choose the frame of the Eurasian Jay with the nut in its beak. This is where the power of the 6K Photo mode really comes in to play, because I am able to select the exact moment frame by frame.

My next attempts with this feature will be to continue to understand the focusing. One of the challenges with fast moving wildlife subjects is focusing during the 6K Photo activation. If subjects even move slightly out of frame certain areas of the image will be soft or even out of focus. So I need to experiment a little more to understand the limits of focusing when in 6K Photo mode.

Overall it has been a great first start with this new technology, and as I work more with this mode I will be expanding my thoughts further in other blogs, so be sure to stay tuned.

David millar(non-registered)
Thanks a lot for your lovely blog post.
Oscar Fernandez(non-registered)
Amazing capture. I am loving all of your captures
Robert D. Akins(non-registered)
Hello..first of all thanks for sharing these information.I am very interested in this 6k photography.
The features in in this are very much impressive and shots you are took was also good.I need to know which lens you used for this,It too attractive.This technology was simply amazing....loved it
Matt(non-registered)
Thanks for sharing. I've loved my GH4 but the lack of IBIS forced me to use my Olympus EM5 mkii for Stilp Photography more often, unless I was in bright light. Still love Panasonic's menu MUCH better so super excited to get my GH5 soon. Have do you feel the AF is for action and wildlife? Not talking 6K photo but standard still work. Also what lenses are you using?
dougorama(non-registered)
How do you extract one image at a time using a computer?

The small screen of the GH5 is not that easy to use especially in the field where shooting is done as opposed to editing.
Convert V4 is supposed to work, but my Windows computer at my job says there may be a virus in it.
I use a FAST Mac at home, but I can't find a program able to view & extract single 6K images (VLC won't play these H.265 MP4's w/o locking up)
No comments posted.
Loading...
Subscribe
RSS
Recent Posts
2023…an update The Lumix 200mm f2.8 lens: when to use it? Having to work hard to get images The story behind the frame Minimalism - a trend for the current times Mes 9 meilleures images de 2019 (et premier blog en français!) The much overlooked Panasonic 14-140mm f3.5-5.6 lens A very personal blog: Mental Health and Photography. Dune fox success! Getting up close to dune foxes with the Leica 50-200mm f2.8-4.0 lens The search continues: dune foxes
Keywords
Photography Wildlife Nature Animals Africa Panasonic landscapes Lumix Birds wildlife photography
Archive
January February March April May June July August September October November December
© Jon Bryant Photography
Powered by ZENFOLIO User Agreement
Cancel
Continue