Despite living in continental Europe for well over a decade, this year was the first year I attended Le Salon de la Photo in Paris. It is the largest annual photo show in France and second biggest after the biannual Photokina in Germany. So why haven’t I visited before?

Well a few reasons; notably it falls on a bank holiday weekend in November, and I am normally on holiday with the family.

But I also have other options locally if I need to attend an exhibition, look or try out new gear. I have an excellent local Photo Show at Tour & Taxi’s in Brussels. I also have  The Photography Show which is in my home town of Birmingham in the UK.

So Paris was a first for me and with good reason. Panasonic France had asked me to attend the show and give a “Masterclass” on European Wildlife Photography. Now this was quite a challenge. The  first challenge is that European Wildlife Photography is a very diverse. I’ve been a Panasonic Ambassador since May 2016 and my main focus this year has been bird photography. So my portfolio of diverse European species is not yet there. The second challenge was that despite speaking French, I have never presented in French. Speaking French for a native English speaker is very challenging. I won’t go into all the details, but pronunciation (amongst other things) doesn’t come naturally to us English speakers. Add to that the fact that I don’t have a good grasp of a lot of photographic and creative vocabulary. The “Masterclass” was a full hour. I had to put some preparation in. 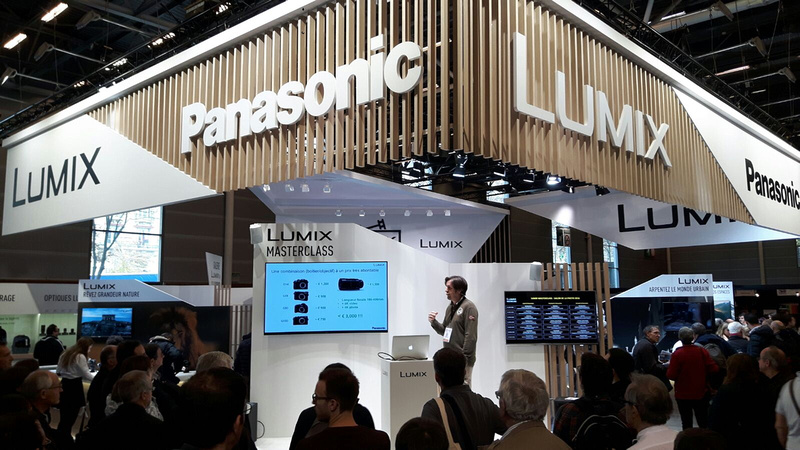 A good crowd attended my "Masterclass" presentation on wildlife photography

The first thing I decided was to keep things simple. I decided to first and foremost focus on two species because by their very nature they are the most accessible species to photograph in Europe; Birds and Deer.

Then I decided to build my “Masterclass” on some of the basic principles of my own photographic journey in Wildlife Photography and how the Lumix Camera Systems have helped me on that journey.

Finally I added a lot of images into the presentation. They say “a picture paints a thousand words”, so with a good selection of well thought out images, getting my points across should be easy. 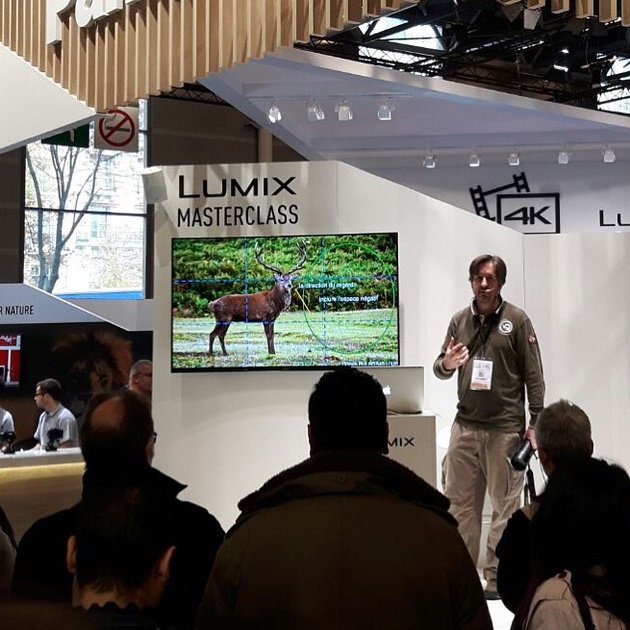 Explaining some of the basics of composition

I didn’t have the best preparation for the “Masterclass” on day 1. Public transport conspired to put me under pressure with late trains and subway works which saw me getting in at the show just 45 minutes before my presentation time. But on my arrival at the Parc d’Expositions de Versailles, I made one simple observation: all of the major brands had stages and presenters. There were so many presentations taking place that there was a cacophony of microphone noise. I did not have this impression at Photokina in Germany. But I do feel that this was a very cultural situation; that French people are hungry to learn and improve their overall knowledge. I also think that companies and brands see these types of presentations as a key marketing tool that draws traffic to their stands.

I gave my “Masterclass” and it went well, much better than I expected given it was a first presenting in public in my second language. The audience were kind enough to give me applause and at the end there was a lot of engagement from members of the audience who had follow up questions and wanted to know more about what I do and the kit I use. This for me was what a photo show should be all about.

You see about 5 years ago, I’d go to photo shows/exhibitions and spend hours looking at cameras and lenses, looking at gear and accessories I thought I needed to take photographs. Over those 5 years I’ve invested in the kit I need, I’ve sold some of it on, and replaced it with other kit. But overall I have what I need to do the job. In the last 2-3 years my focus has been almost entirely on camera and field craft. So when I go to exhibitions the displays of the latest camera equipment is not as relevant to me. This has become more so as I became a Panasonic Ambassador as I know and am very happy with the cameras/lenses I use. But I still observe many visitors spending almost 95% of their time with kit in their hands trying things out and 5% of their time talking with other photographers. This for me is the opposite of what it should be. I believe there is far more value in engaging with fellow photographers than it is in trying out gear. Yes, by all means try out gear if you are thinking of investing. But I would argue that it would be good to talk to other fellow photographers about their experiences with field and camera craft before you start looking at your next camera investment. 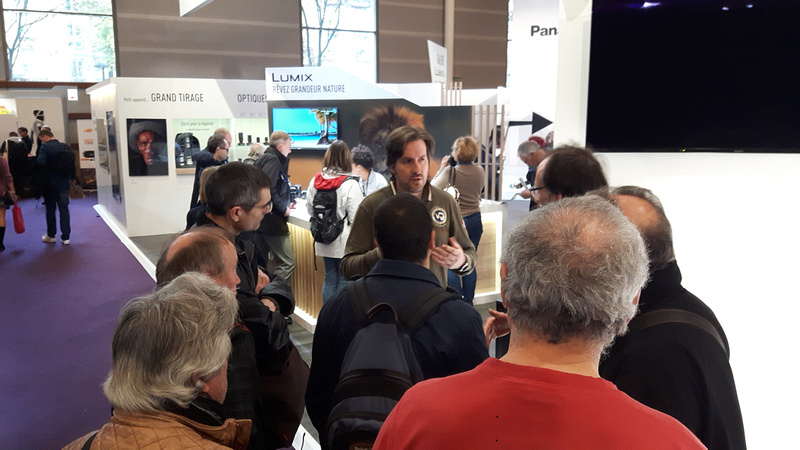 Talking with some of the visitors after my presentation and answering questions.

Whilst at Photokina, I met for the first time the other Panasonic Lumix Ambassadors. In very short but valuable conversations with them I learnt a huge amount. I learnt how other Ambassadors use their tools, apply their craft and create images with their vision. Equally when they asked me how I shoot and I explained some of the intricacies of wildlife photography they were surprised at some of the techniques I used to shoot with.

For me the exchanges with other photographers was the more valuable element of the show. The basic analogy is that you wouldn't buy a car if you didn't know how to drive it. And the issue with photography shows is that the emphasis is so often placed on the gear and not the craft. Now that may seem a strange sentiment coming from an ambassador of a major brand. After all brands want to sell you, the consumer, the gear. Yes, but...that is the whole rational behind the idea of ambassador programs. My role is to share and educate my experience and engage with visitors. For me this is a 2-way process. I listen as much as I answer the questions. And I find that a very rewarding element. If I can help someone with a tip, trick or technique then I am happy. Likewise if I learn something I'm even happier!

For this year most of the major photography shows are done and dusted. There are a couple of regional nature/wildlife shows still to be held. But if you are planning on attending a show in 2017, have a look at the education and engagement opportunities on offer. Take advantage of the photographers that are there and engage with them. I guarantee it'll make the whole experience much more rewarding than if you were to just play with the cameras!