I wanted to write this blog after returning from Kenya, but things ran away from me. Now I have some time and so I've put pen to paper, or should I say, I'm at the keyboard. This blog is simply entitled... 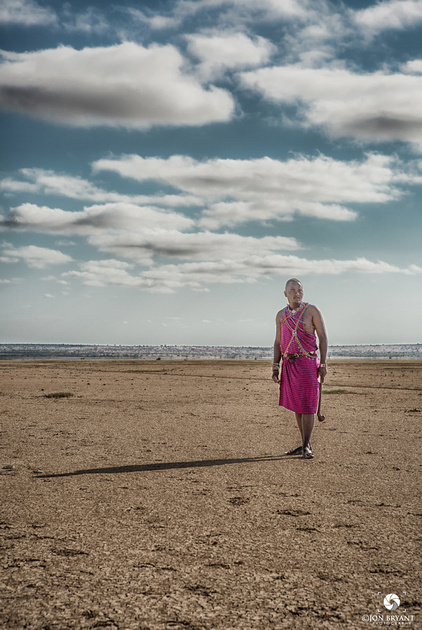 Whilst on the lakebed we did some high key shots of Tim. I also decided to take a HDR portrait of him.

Tim was our field guide for the Wild Eye Essential Amboseli & Tsuavo West Photosafari. I first met him at the airport on arrival when he managed to skilfully navigate the Nairobi Airport traffic to pick me and my luggage up. The first thing that strikes you is that Tim was dressed as a Masai. As a new visitor to Kenya this makes a huge...positive....impression on you. I mean as a photographer, you see images of the Masai tribes and you kind of hope and dream of seeing or photographing them. In my case I was being picked up at the airport by one!

But appearances are of course not at all what they seem. As well as a proud Masai, Tim is a modern man, who has his field guide qualifications in hand and a clear love of the bush. His proud Masai heritage may be shown in his Masai attire, but there is much more to Tim. Many a moment on a photo safari you spend waiting. You might wait and hour or so for the light to change, the clouds to move, the lion to wake up, the giraffe's to walk into position, whatever...all the time Tim is watching and waiting. And during those times, Tim would tell me how he likes being in the presence of other photographers because we aren't in a hurry and we appreciate what is around us more than the average 'tourist'.

There are three stories I want to share with you to give you an indication of Tim's experience, character and inspiration.

Before I met Tim, I'd seen some content on line about his photographic exploits. He has a keen eye for photography and whilst I was on safari with him, he hadn't yet got a DSLR. He was using a pair of binoculars and his Mobile Phone to take images. There is a great blog on the Wild Eye page here about Tim's Phone photography. It was quite an experience for me to see him do this. This technique can be very powerful. In fact the recently announced Bird Photography of the Year competition in the UK has a category specifically designed for this technique - some call it "Digiscoping". For me it shows the ingenuity of someone who's keen and passionate to learn the craft with whatever tools they may have at hand.

There's a really nice video here where Tim shares his thoughts on Photography and Photosafaris:

One afternoon, we were having a quiet drive in Amboseli. There were elephants everywhere, yet we'd had our fair share of elephants and Tim suggested we go explore some of the open plains area. Amboseli has a diverse landscape and we'd arrived on a road close to a small river which was lush and green, and I'd noticed some Crowned Cranes. I suggested to the group we take a few shots given the environment they were in and that they were feeding. As we started looking in our viewfinders, Tim was scouting the horizon with his Binoculars. Tim then quietly said "Jon, there's a Lion over there". Sure enough, sat in the yellow/green grass was a Lioness that was well blended in to her environment. We repositioned our lenses! She was slightly far off, but it was great to see a beautiful lioness. 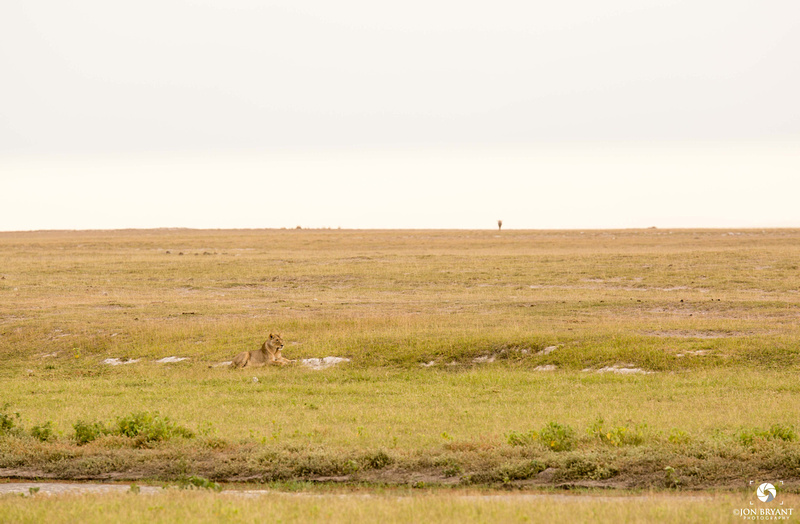 We sat and watched for a little while. She looked to be in a very sleepy flat cat situation and so I was expecting much to happen. Then she yawned. At this point I said "she's going to move". If you ever see a flat cat of any variety yawn, it means one simple thing...they will get up and move. It's a way to get oxygen to their brains and is the way as a photographer you can anticipate when an big cat is about to do something interesting. 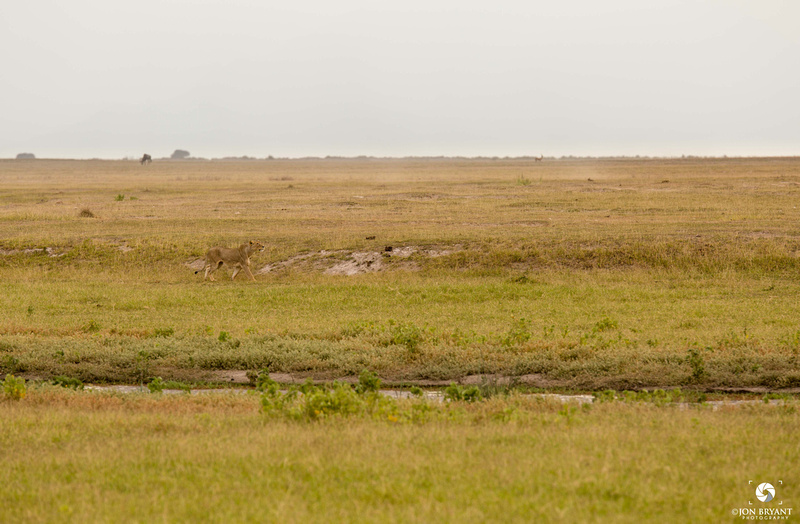 Tim's immediate response was "If it's ok, I'm going to put us on the other side of that river, as I think we can get ahead of her". We didn't realise this straightaway, but Tim made a brilliant call. We about-turned and headed off. Just as a few other vehicles started coming in. Tim got us the other side of that bank you see on the photo above. At which point our lioness went flat cat again! 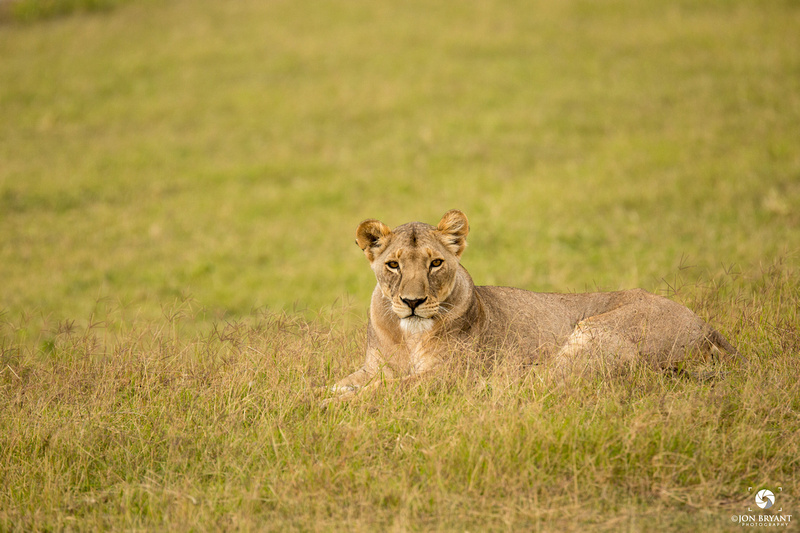 To the right of us were a herd of wildebeest. They were some ways from us. So I didn't think anything of it. The fact she'd just lay straight down made me think she was going back into snooze mode. I then saw her yawning again. 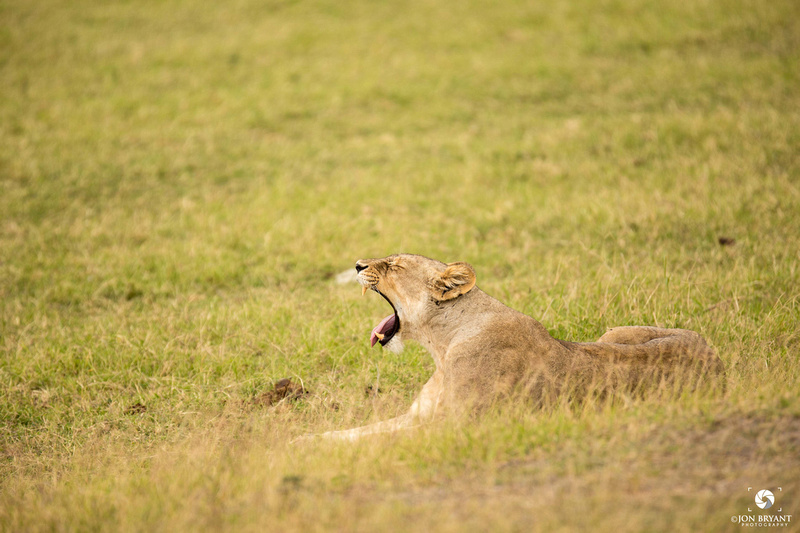 I knew that she was going to now move. Where I had no clue. The wildebeest were far away, around 600 meters from her. They weren't alarm calling. She was on her own, and I figured there was no way she'd go hunting. Then Tim repositioned the vehicle to stay ahead of the game and I got these two shots which made me think twice... 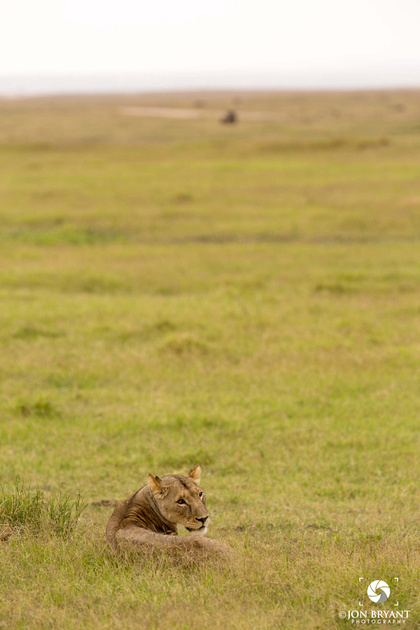 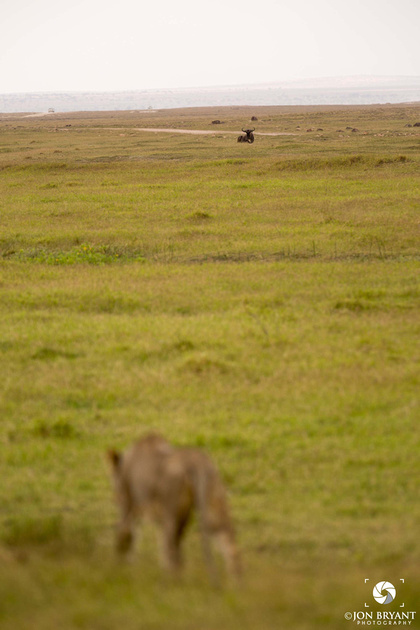 The lioness got up and started walking purposefully. She took a look at the two other vehicles that were next to us, turned and started to walk right along the river/drainage line. 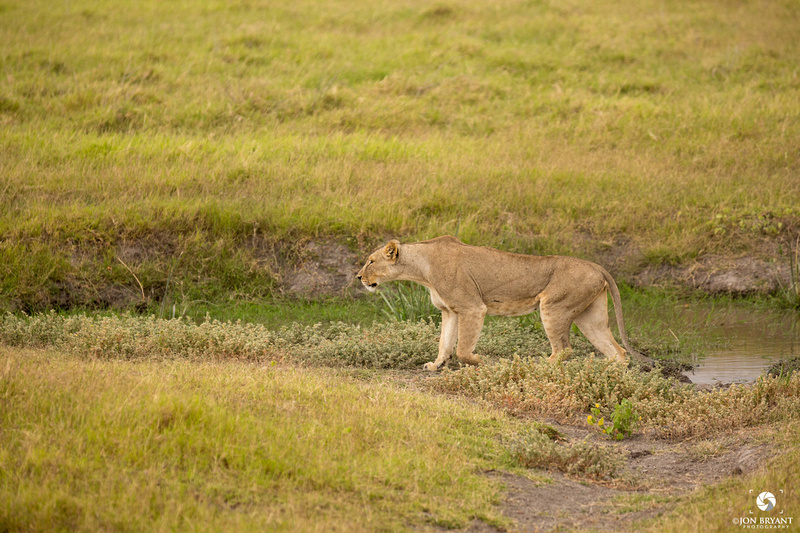 At one point she went behind the embankment and I lost, we lost sight of her. She had gone into stalking position and that was the last I saw her. Still I was expecting a long wait before she resurfaced at the end of the embankment where the herd of Wildebeest were grazing, oblivious to the threat. She had found the perfect approach, totally concealed from view. I estimated at which level she would be, and I had my camera at the ready. I'd seen a lion stalk like this before, but miss the kill. I thought that experience would help me. But it didn't. She'd advanced significantly further than I thought, and she then struck and within a split second she'd taken a wildebeest down. It happened so quickly I'd missed the pursuit and take down. I did get this shot though, although by now we were some ways from the sighting. 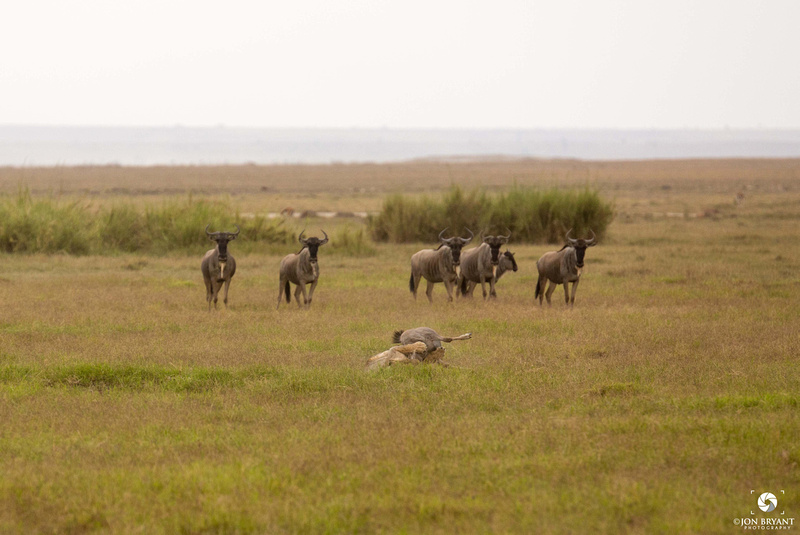 This was the first Lion kill I'd seen. Another vehicle passed us, with some American tourists. The father of the family was jubilant and excited, whooping and shouting with excitement of what he'd seen. That's not really my style. I'm not a wildlife photographer that was hoping to see a kill. But I am a wildlife photographer that wanted to tell that story should it happen. I feel immensely privileged to have witnessed it. And it was thanks to Tim's anticipation, skill and patience that we witnessed it. Little did we know at that point the excitement had only just started. But I will leave the second half of the story to another blog. Tim, thank you. It was a privilege to witness.

The 3rd and final story I wanted to share with you about Tim is regarding birds. Regular readers of my blog will know I have the highest degree of respect for bird photographers. They are without doubt the most challenging animals to photograph.

I'd noticed that Tim had a keen eye for birds. On one drive in Amboseli he spotted a brown hooded kingfisher. This was one of the closest encounters I'd had of a kingfisher and I got a stunning portrait of it. Whilst taking my photographs, I noticed that Tim was busy looking in his bird book to check the identification and then noting it down in his notebook.

It was when we actually got to Tsuavo West that I spotted a Purple Roller some ways off road from us. Despite the distances I decided to take some images because it was a beautiful bird and one of my favourites. I was sure it was a Purple Roller. As I took my photos, Tim said "Jon, it's a Rufus Roller". "A what?". "A Rufus Roller". I'd never heard of a Rufus Roller before. Tim passed me the book. Sure enough the listing read "Rufus (Purple) Roller". I had no idea it's actual name was a Rufus Roller, and the common name being Purple Roller. I smiled at Tim. I'd learnt something. Tim noted it in his book. 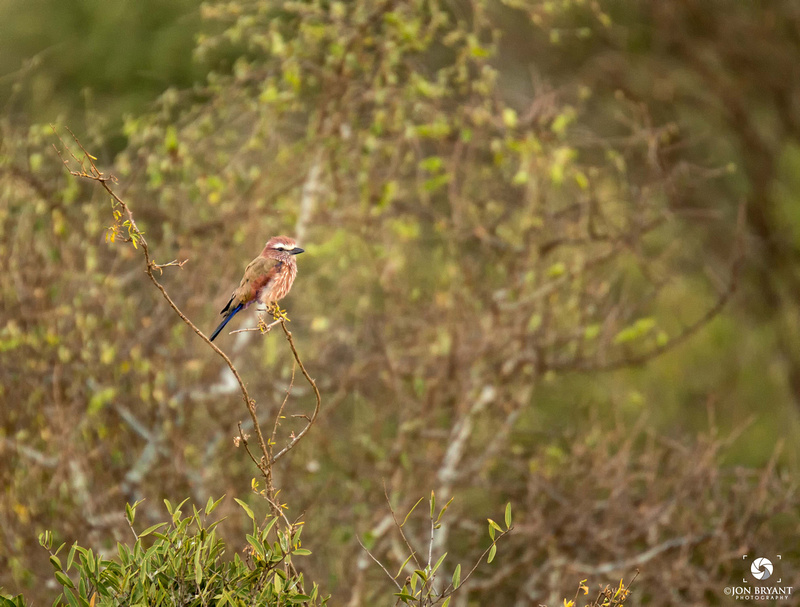 We then got chatting about birds. It was at this point Tim told me such an inspiring story. He told me that there are 1089 difference species of birds in Kenya, and he is part of a species mapping program to understand the population densities throughout Kenya. He had to date estimated he'd identified in the region of 600 different species. He wanted to identify all 1089 of them. Then the "cherry on the cake". He wants to photograph all 1089 of them. I just love his passion and ambition behind such a project. I think it is great that someone who spends so much time in the field with an amazingly diverse set of mammals in front of him; elephants, big cats and so on....he's chosen birds to focus his photographic passion on. This is such an amazing inspiration.

I'm happy to report that since my photosafari with him in Amboseli, he is now in possession of a Canon 60D. I'm so pleased for him. Here he is in action during the recent migration season. The smile says it all :-)