My daughter recently turned 9 years old. As parents we were looking for an activity to do for her birthday. A friend of ours offered to take her to a local wildlife park as a surprise. As she really loves animals we thought this was a great idea.

I have mixed feelings about wildlife parks and captive animals. On the one hand I have a hard time accepting the concepts of traditional zoos, especially when I grew up in the 70s and 80s when zoos were known not to have the best conditions. For the most part, conditions have significantly improved since then. Wildlife parks when done right I feel can serve a purpose. Not everyone can afford to go where the wildlife roams wild. So as long as a wildlife park can maintain a quality of life for the animal AND educate the visitors about the species and conservations issues - then wildlife parks can serve a very valuable purpose in educating the general public...

So when I went with my daughter, despite taking my camera along, my primary purpose was to make sure she had a good understanding of each animal. I'm no expert, I'm not a zoologist. But I would say I have an awareness that is above average due to my strong interest in wildlife photography. My daughter went on her first safari experience earlier this year. What was interesting to view at this wildlife park were the species she'd not encountered before.

Now, because I'm going to call it how it is, I am not going to name the park in question. Suffice to say if you know a little about me and where I am based most of my time, its very easy to guess where I am talking about.

The park does allow you to get up close to some of the animals. Again, I have mixed feelings about this. I think it is ok, if there is some educational guidance on how to approach and interact with the animal, but unfortunately this was very much lacking. Instead on 3 or 4 occasions the interaction consisted of a general rugby scrum with people trying to solicit the attentions of the animal by offering food, despite the "Do not Feed" warnings. This is my biggest point of contention, because some species such as the Squirrel Monkey that we observed, cannot digest food designed for human consumption, and so can be dangerous to the animal. So I was rather dismayed to see visitors ignore these warnings in the pursuit of an interaction. 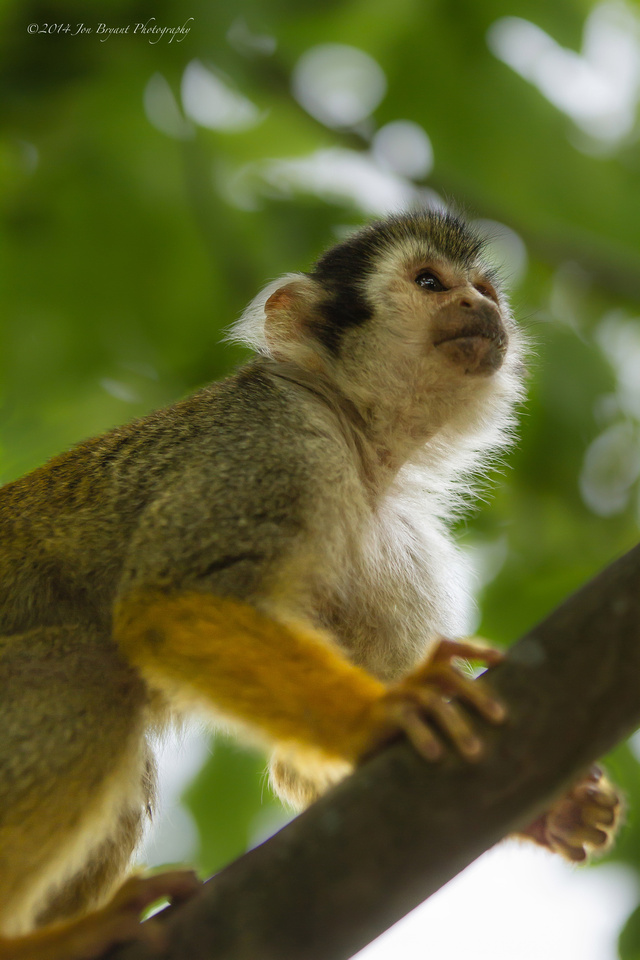 Despite that, I kept my distance and slowly tracked one or two of these incredible creatures as the climbed the trees. They are incredible to watch, so skilled in climbing and balancing. So difficult to photograph as they are small, agile and fast and can put lots of foliage between them and your lens.

Photographically, I decided to use this opportunity to try something out. I decided to use the shallowest depth of field on my lens (f2.8) and set myself the challenge of seeing if I could creatively use this shallow depth of field to tell a story in the image. These were all captive animals. So their environmental context was one of a captive environment. I wanted to challenge myself to see if my shooting wide open, I could focus in on the character and behaviour of the animal, despite the environment they were living in.

We then moved on to view the Lemur's. 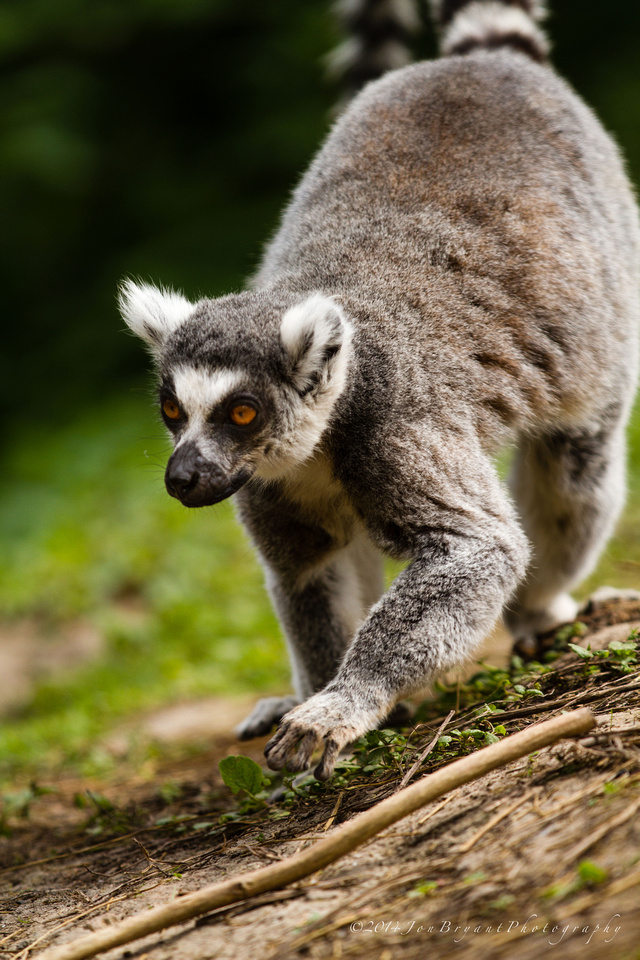 The interaction with the Lemur's was also something that I had a hard time accepting. The Lemur's were clearly habituated with people and I think this was a good thing. There was clearly a comfortable curiosity from the Lemur that allowed visitors a safe level of interaction. But again, despite the viewing area clearly stating "Do not feed", the numerous crowds meant people resorted to offering food to gain attention. No controls in the park, no education of the visitors. I had a hard time with this. I told my daughter we would be patient and wait for the crowds to pass. Sure enough they did, and the Lemur's moved on to another part of their territory. We slowly followed. 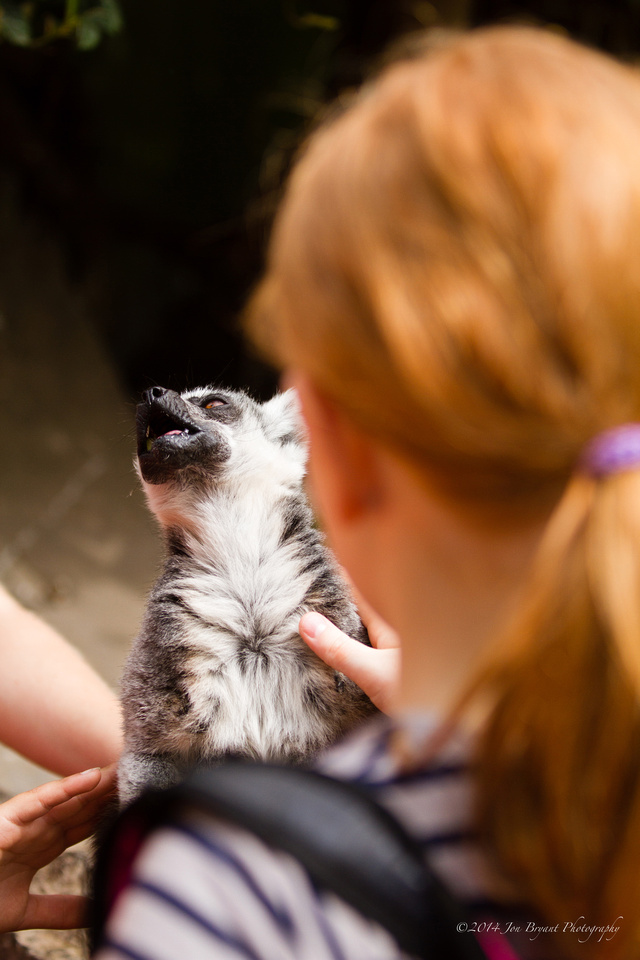 At this point the Lemur became curious again and approached us. I am sure it was driven by its search of food again. But still at least we were not baiting it! This time the interaction was great and as you can see from the photo my daughter got to gently touch it. Like all interactions with wild animals I explained to my daughter that it was their territory and we had to do it on the animals terms, not ours. First and foremost we have to show them respect to gain their trust if they are to interact with us.

The final interaction we had was something that left me feeling very uneasy. Giraffe's. 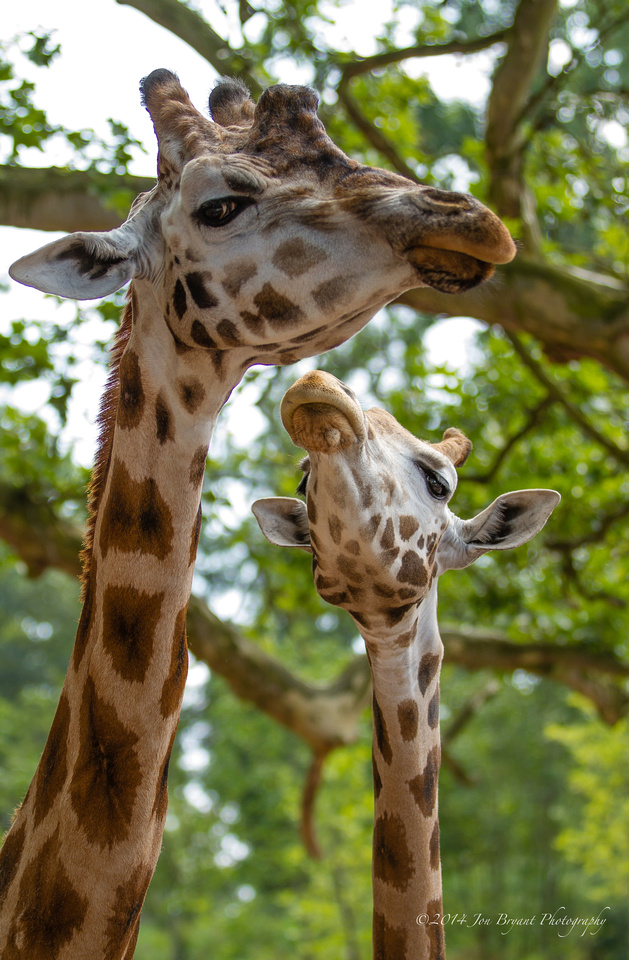 This was what I was confronted with: 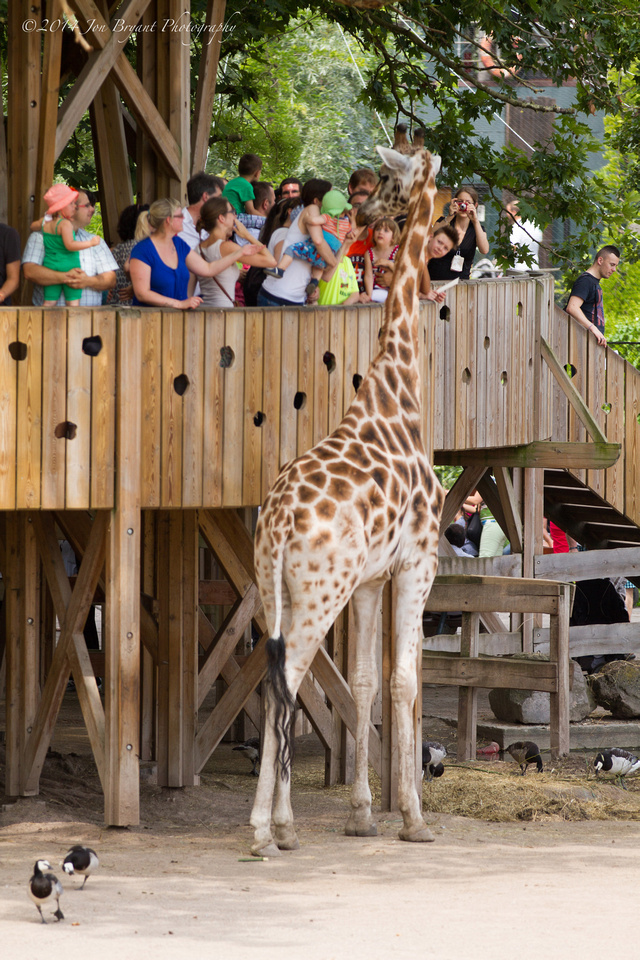 Now, observe the image above. You will notice two things straightaway: a viewing platform and people. What you cannot see however is that there is also a feeder at the Giraffe's height with straw. Look at the giraffe's feet and you will see straw on the floor. This is directly below the feeder. You will also see a parent presenting a small child to the giraffe. The giraffe's didn't stay for long at the platform but tended to move around it. Now as I walked closer to this viewing platform and moments after I took this photo the giraffe started to feed. The parent holding the child then proceeded to pet the giraffe on the head whilst it was feeding. This is a stupid thing to do. And sure enough the giraffe bucked its head and narrowly missed parent and child with its horns. Again the lack of education I found incredible. Animals are at their most vulnerable when feeding or drinking, especially giraffe's. Despite the giraffe's reaction, as it fed again, the parent repeated the petting, and sure enough the same response. As I was watching this, I was explaining the behaviour of the animal to my daughter and why we should be showing it a little more respect.

Giraffe's have a special place in my heart. I think they were one of the first animals I saw in Kruger National Park when I was only 3 years old. They looked so big to me as a 3 year old and their elegance in the way they walked just amazed me...

So I would be a hypocrite if I said I did not take pleasure in getting in close to take some portrait shots. But I will be very honest in saying, I didn't like being up there with those crowds, I kept my distance and respected the animals...the advantage of the 70-200mm lens, even keeping my distance with this lens, I was so close! 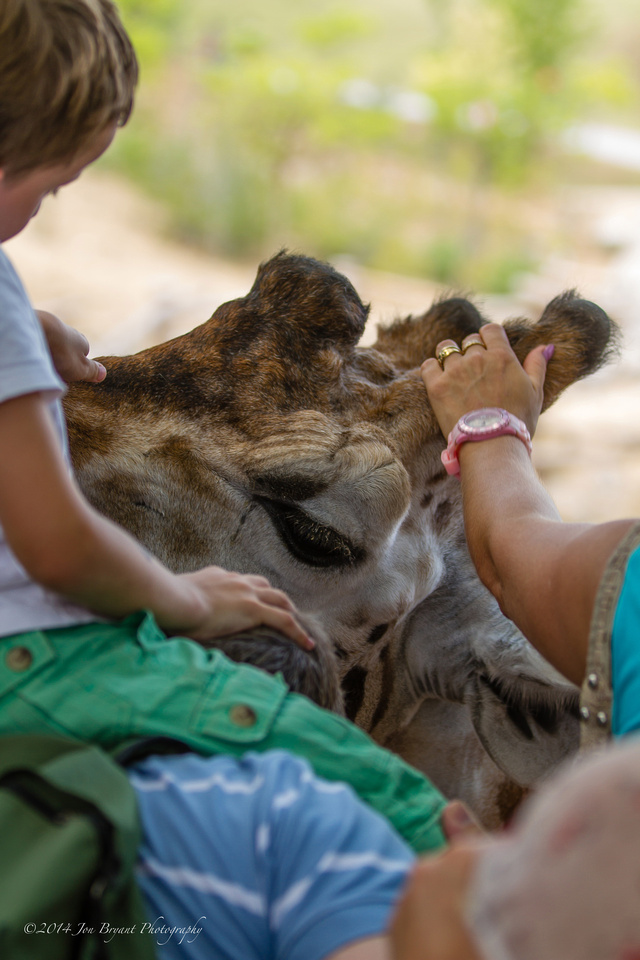 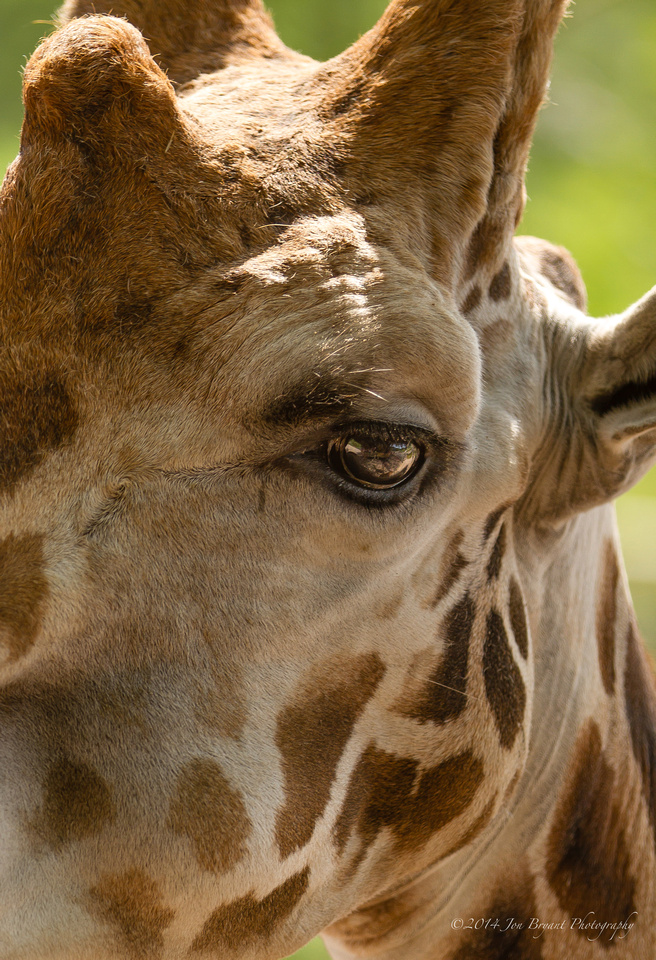 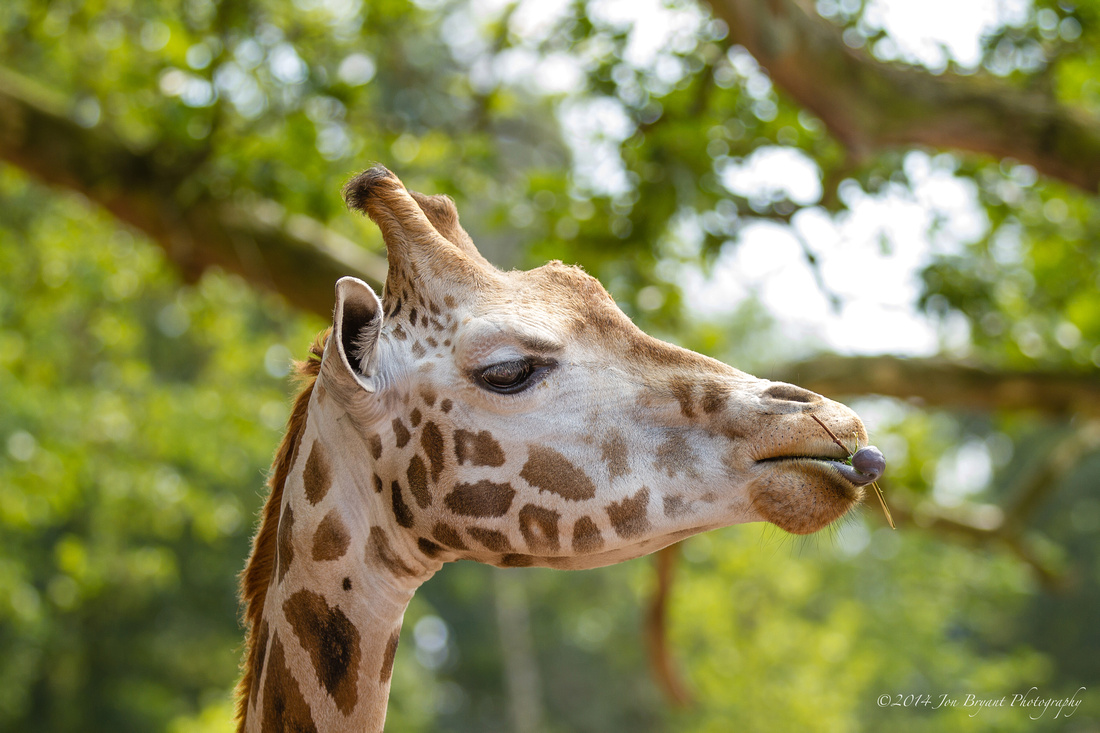 So despite my mixed emotions, there were opportunities to have very close encounters (of the animal kind) and this of course is very much appreciated by kids, and especially my daughter. However I do think that if wildlife parks are going earn their keep (they do charge hefty entry prices) they have to do more. It isn't good enough in my opinion to just put panels next to enclosures and expect visitors to spend time reading them. I would much prefer seeing park rangers in close proximity to help explain to people what they are seeing and educate visitors about the animal, its behaviour and the efforts they are working on for the well being of the animal and wider conservation issues in its natural habit. When I was 10 years old, I went to Sea World in Florida for the first time. This is termed an "amusement park" - but I can tell you that their whole attitude towards their whales and sea life was completely different. You were constantly educated and they have always played a significant role in research and conservation of the species that they showcase. Say what you like about the amusement park industry, I think we can learn a lot from them on the educational aspects for visitor interactions. Having said all that, this wildlife park in question is one of the premier wildlife parks in Northern Europe, and I do think they do a lot of things very well. Their bird life is well managed with some very well maintained open water spaces and lakes. The landscaping of the park is incredible, beautifully crafted and very respectful to the original environments of the animals enclosed. Would I visit again? Yes I would. It would not change my feelings about the interactions...we need to continuously educate visitors on their responsibilities towards the animals they view. But I am not going to be a purist and condemn such establishments. The bottom line is, any interaction between humans and animals in a controlled environment must be seen as a positive interaction. If we can inspire our children to take an interest in wildlife at an early age despite the geographic constraints in viewing such wildlife in their natural habitats, we can educate future generations on preserving each and every species, and limiting mankind's impact on animal habitations.

From a photographic perspective here are some other highlights...keep in mind my personal challenge with these images that I described earlier. I wanted to shoot with a shallow depth of field (f2.8) and to tell a story about the animals personality and behaviour irrespective of their environment. 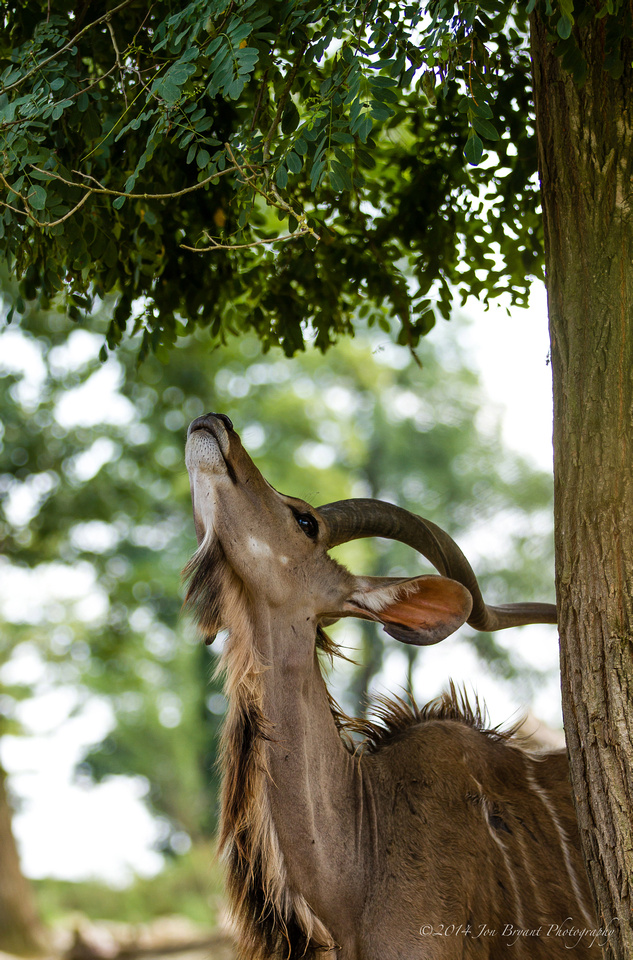 A Kudu outside of Africa! Can you tell from the photo it's not Africa? 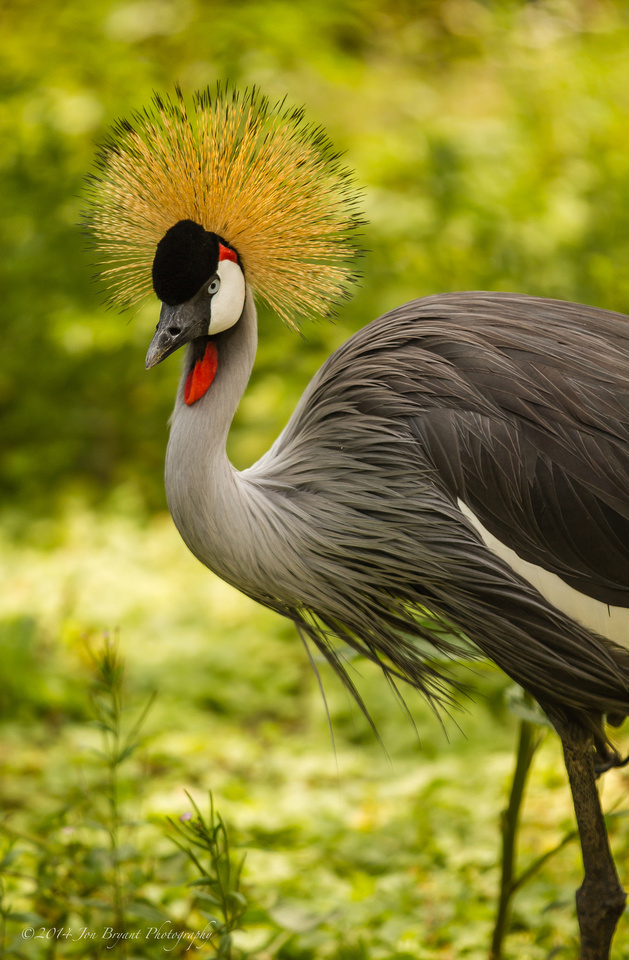 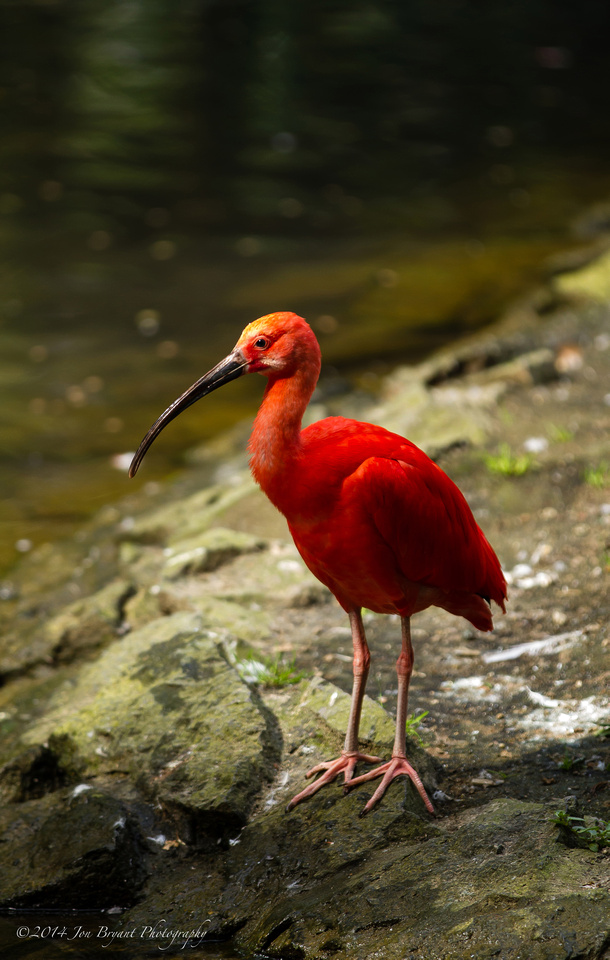 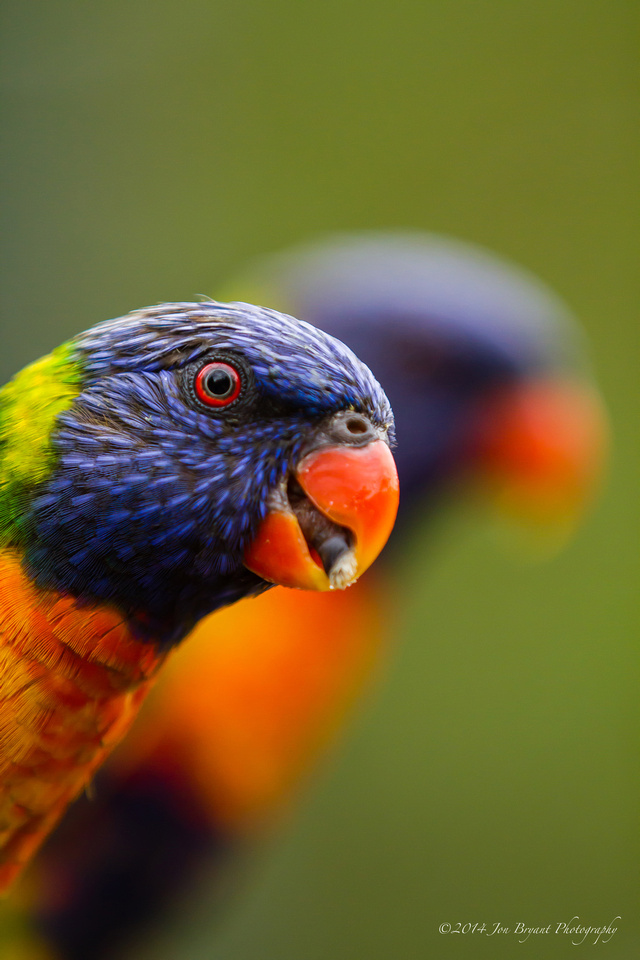 A "pair" of lorikeets