I warn readers now that there are images I am sharing in this blog post that are not to everyones taste. If you are sensitive about dead animals you have been fair warned.

On my latest trip to South Africa in the Madikwe reserve, we got word of an Elephant that had died. The cause of death was unknown. It wasn't a predator kill, but the elephant was a bull and the theory was that he had been injured in a fight with another elephant bull and died of his injuries.

Now before I get into the details of the sighting and my thoughts on that photographically, it is important to realise one simple fact. If you go on Safari you are likely at some point to experience the bush life cycle and that includes animals being killed by predators or animals dying. You can't escape it. Entering into a game reserve you are entering the animals environment. It is not our environment, it is theirs. We are simply privileged visitors to their habitation. There is an entire equilibrium at work that we are privilege to witness. If you are going to get the most out of a safari experience you need to rationalise that simple fact. Those animals have survived in their own environments long before mankind came along and we have to be respectful of that.

The reserve management team had been to the site of the elephant and opened the carcass up. This is an essential process in the management of the reserve. In the elephants death, predators and scavengers have the chance - of a relatively - easy meal. One the one hand, the carcass is actively "cleaned up" in the most natural way possible. On the other hand, whilst those scavengers and predators are feeding on the elephant, they don't need to hunt, so other prey live to see another day and get to flourish. This very simply is the life-death cycle in the bush.

So with that in mind, the next morning we headed out early whilst still very cool to see who would get their first? Would it be a pride of lions or a group of hyena's.

Well to my surprise it was neither. It was one of these fellas. A black backed jackal. 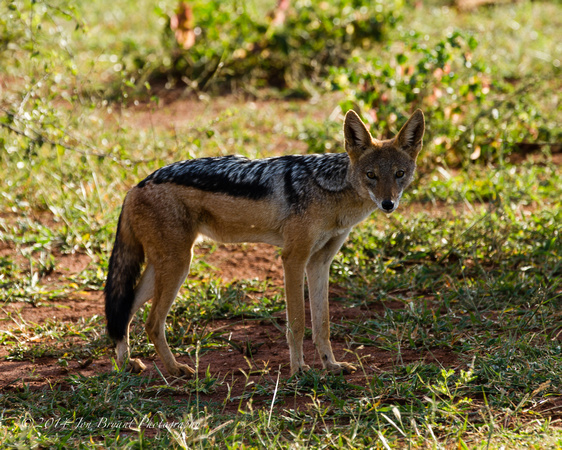 On previous trips to South Africa I had been wanting to photograph Side Stripped Jackals, but never had any luck. I'd seen them on several occasions, but none had stayed in one place for any length of time for me to photograph them. Now in front of me I had a black backed jackal, somewhat relaxed at our presence, but certainly on guard as he investigated the carcass.

Yes there was a smell. But not as strong as I was expecting. The cool over night temperature had surpressed the odour somewhat. I watched as the Jackal climbed on to the elephant deciding if it was safe to feed. 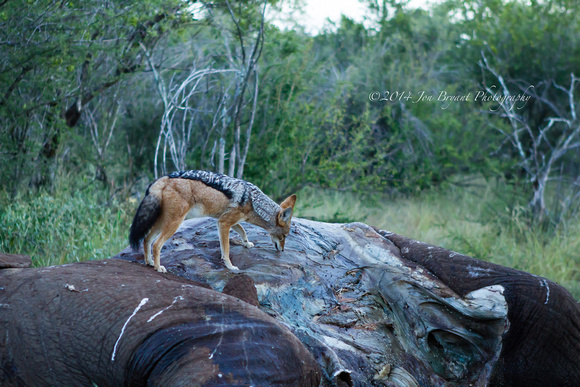 It is difficult to know photographically how to capture such an image. I am not even sure now, when I look at my image if I did it justice. On one hand I did not want to capture an image that was overly graphic. But that is hard to do when confronted with large dead elephant carcass. Similarly I had to ask myself, how do I compose the shot and what is the focus of my image? Well, for me it was showing the shear size difference between the feeding jackal and his meal.

But the Jackal wasn't entirely relaxed. At any moment in time another larger predator could come in, and he was no match to defend his meal. He would regularly stand watch and this in itself presented an interesting contrast for a series of images. 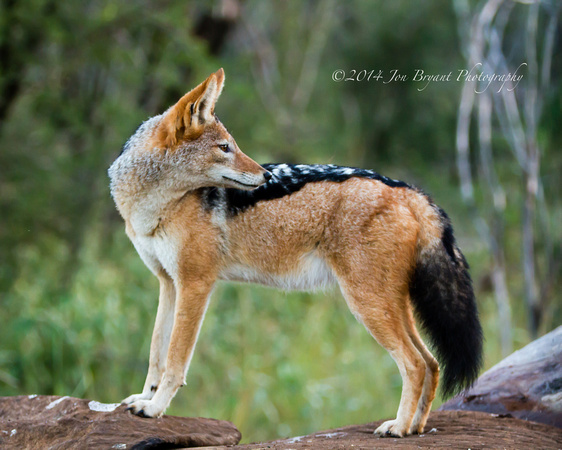 On the alert…the Jackal continued to keep watch before feeding. 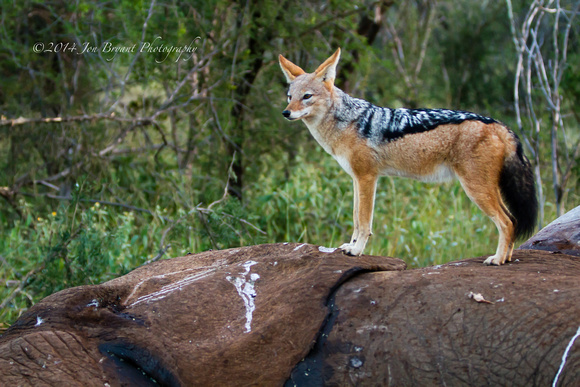 Ear cocked - an effective way to protect your rear whilst keeping eyes frontwards.

Photographically the light was not the best. This was at 6am and so I pushed my settings to their limits. With a 1/80 shutter speed this was far from ideal for getting sharpness in the shot. My aperture was at f4.0, my maximum opening with the teleconverter, iso was 800, I didn't want to go any higher as I wanted to reduce the noise.

The jackal was right to be very attentive. Suddenly he bolted and we had no idea why... 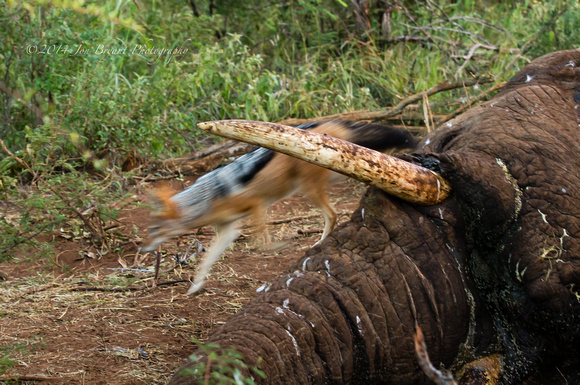 Disturbed by something the Jackal bolts.

As he bolted I got this shot. Still at a shutter speed of 1/80 and you see he is blurred. I'd like to think it was all planned. But no. I got lucky. I am really pleased he is blurred because it shows the rapid movement of that moment in time. It tells the story.

We couldn't work out why he fled.

Then we saw something emerge from the bush….equally guarded, one of the bushes most efficient predators and scavengers. We then had a second sighting... 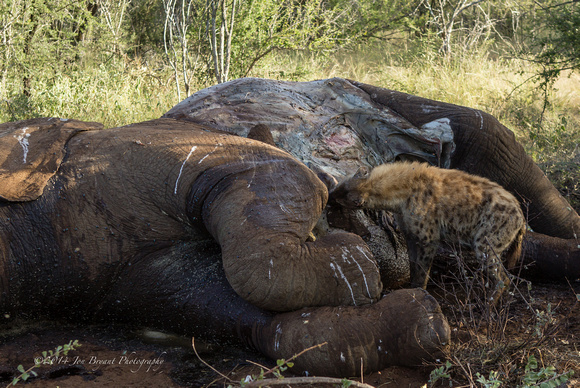 A spotted hyena came in, and started feeding. Likewise he regularly paused and circled around the site of the elephant making sure nothing else was lying low and close in greater numbers ready to pounce. It was like watching a metronome: feeding, look up, circle the carcass and back to feeding again at almost precise regular intervals.

Then on closer inspection we realised why this particular hyena was so cautious. He himself had been victim of a savage lion attack. He had lost an ear and was badly disfigured, but he had lived to fight another day. That in itself was a stark reminder of the fine balance between life and death these animals go through every day. You couldn't then begrudge them the opportunity of an easy feed. 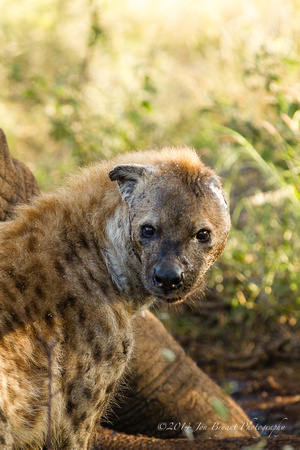